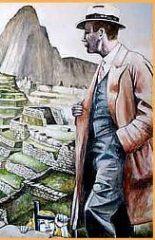 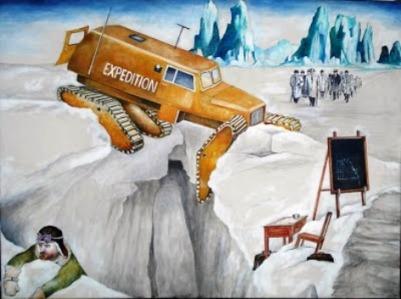 Work can be seen before & during all  Torriano events –
see https://torrianomeetinghouse.wordpress.com/
and can also be viewed by appointment – telephone 01424 719 570 for more information

The Torriano Meeting House seems to have pulled off something of an art coup in Kentish Town. It is staging an exhibition of paintings by Howard Fritz whose work has previously been seen in public only on book covers and in a few literary magazines. For the next few weeks there is a rare opportunity to see a dozen of Fritz’s large canvases together with four of his smaller watercolours.

Howard Fritz was born in the USA but came, with his wife, the poet Leah Fritz, to live in London in 1985. All the pictures on display at the Torriano were painted in London but they draw on both American and British influences. Fritz’s work can be described as figurative but with the particular twist that it features accurate representations of people and objects set in unlikely combinations, for which the term ‘surreal’ would probably be appropriate. If one wanted to place him in relation to other artists one might say that his idiosyncratic juxtapositions usually involve more elements than most of Magritte’s best known works; but at the same time they are rather understated and less densely populated compared with those of Tom Adams (recently reviewed on London Grip at https://londongrip.co.uk/2016/01/tom-adams-uncovered/)

Elements that typically appear in Fritz’s work include scenes from films and carefully drawn machinery (with aeroplanes being a particular favourite). As is the case with Jeff Wall’s large-scale urban photographs, the composition seems frequently to be designed to create an air of uncertainty or a sense that something alarming and disruptive has just happened (or is about to happen). In ‘Mishap’ which appears at the head of this article, the foreground shows a figure who might either be escaping from the snowy crevasse or just about to slide back into it. The rapidly descending graph on the blackboard at the right could relate to his impending fall – or it could be a comment on the approaching procession of grey city gentlemen (bankers?). These figures also remind me of The Waste Land where Eliot observes the crowd flowed over London Bridge, so many, / I had not thought death had undone so many. One cannot claim that Fritz had any such thoughts in mind when he painted the picture; but he certainly opens up space for the viewer’s own speculations and recollections. Writers planning to visit this exhibition would be well-advised to bring a notebook to record the unexpected ideas that may be sparked by the images on view. 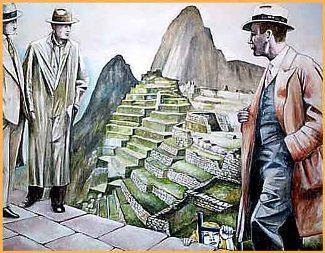 A similarly ambiguous climbing/descending female figure appears in ‘Inca’ (Fritz likes laconic titles).  She is dwarfed by three men who,  ungallantly, ignore her. The right hand figure looks rather like Humphrey Bogart, so is this a comment on sexism in 1940s Hollywood? Again we do not need to know the artist’s intentions in order for the picture to set us off on a train of thought. And once the imagination is thus freed, anything becomes possible! ‘Petrol’ (below), for instance, with its background row of fuel pumps, might be seen as a kind of inversion/subversion of Edward Hopper’s ‘Gas Station’. 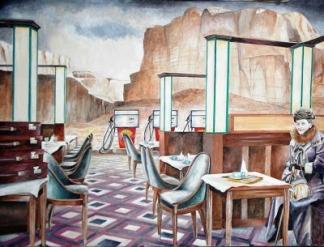 Sometimes, however, Fritz’s paintings are more naturalistic and tranquil with only one unsettling feature. In ‘Oil Can’, eyebrows might be raised at the sight of mechanical engineering taking place in a drawing room; but such activity has been known to happen and it is probably the identity of the figure in the photograph that arouses more curiosity. In ‘Plant’ we have almost a straightforwardly realistic landscape – except that the intrusive placing of the distant building gives the impression of a Photo-shopped cut-and-paste version of reality.

This exhibition represents only a small sample of Fritz’s large body of work and more can be seen on-line at http://hwfritz.blogspot.co.uk/. However the paintings are shown to especially good advantage in the high-ceilinged and well-lit space of the Torriano and it is well worth coming to see them in situ. The reproductions accompanying this review are helpful in conveying the imaginative and unsettling nature of Fritz’s compositions; but they do not really do justice to their delicate colouring – quite unusual in pictures of this size.

These remarkable paintings will be on view, as outlined at the head of this article, until early March 2016.