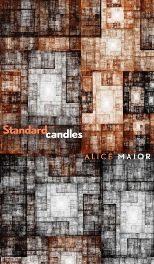 It struck me that I might need to draw on skills from my other life as a professional mathematician when I saw the table of contents for Alice Major’s new collection Standard Candles. It includes poems with such titles as ‘The god of prime numbers’, ‘The god of quantum uncertainty’ and ‘Pythagorean theorem’ (not to mention one which features an actual equation that seems not to be reproducible here – although I do suspect that it should have an additional square root sign!)

Major makes no secret of her fascination with physics, cosmology and mathematics. Indeed her expertise has already been revealed in a previous book Intersecting Sets, a collection of essays which give a poet’s view of scientific themes. In her poetry she uses her knowledge of specialised – even arcane – fields in the same way that British playwrights Tom Stoppard and Michael Frayn have done: to provide startling and vivid analogies with the human dynamics of a complex emotional universe with which her readers will be more familiar.

This is a handsomely produced and carefully organized book, divided into themed sections, of which the first is ‘The set of all gods’ wherein we learn that some divinities like to dabble in double meanings. The god of prime numbers chooses to leaves us wondering how long we must remain in a dreary world of common factors; and there is an outrageous punning description of the god of symmetry which could be a sidelong reference to the tongue-in-cheek notes Eliot appended to The Waste Land. The god of quantum uncertainty manifests himself as a trickster figure of North American First Nations legend – immoral immortal coyote; but the baker god appears in more modern form in a (Tim Horton’s?) doughnut shop, crafting the universe’s complex geometries:

Alongside such delightful conceits and fantasies, Major is capable of fine poetic descriptions that reflect current understanding of how the cosmos actually behaves. A diamond sun crystallizes under gravity’s contracting purgatory while other stars

The second section ‘Ordinary matter’ begins in hands-on fashion with I am yanking at clematis … Rapunzel’s tresses in reverse and then contrasts this real experience with the physicist’s equally real view that matter is so much empty / space between spinning nucleus / and distant echoing electrons. Subsequent poems continue to play with both orthogonalities and parallels between ordinary perception and scientific fact; and I particularly liked the way Major treats love triangles as instances of the mathematician’s three-body problem: Two bodies … will orbit each other forever

The title section ‘Standard Candles’ deals with some not so well-known scientific breakthroughs in mapping and measuring and introduces such neglected figures as Henrietta Leavitt and William Lambton (whose achievements are well explained in ample notes at the back of the collection). These poems are mixed with a few third-person autobiographical pieces about childhood moments of fresh insight into the vastness of the cosmos. Poems in this section are generally longer and more interconnected than those that have gone before. Among the cleverly inter woven themes is the notion of ‘Heaven’ not just as the sum of all space, planets and stars but as the place which, for an eight year old child, was supposed to be both the home of God, Sunday Schools’s Creator and also where Nana and her aunt had gone. For the grown woman, the question What is God’s place in all this? becomes something to be looked at later until bereavement forces a re-examination of position and distance in space-time:

We learn (thanks to Major’s determination not to waste any information gained in her wide reading) that the ‘Muscle of Difficulty’ is Darwin’s name for the corrugator which enables us to furrow our foreheads. This fact leads into a group of poems which focus on a range of impending difficulties: the approach of winter (November’s clench); a worrying crack in a basement wall; and (once again) the inevitability of sickness and death. Prolonged terminal illness is somewhat whimsically likened to ‘The mover’s dilemma’ – the problem of a sofa (and its occupant!) getting stuck at the bend in a narrow staircase

To invoke Pythagoras here is perhaps to neglect the three dimensional nature of a problem which can be solved by tilting the wedged sofa. But, such quibbles aside, we should commend pain’s implacable geometry as a fine instance of Major’s deft use of technical vocabulary. Other examples occur when she deals with a ‘morbidity curve’ describing the demographer’s desired geometry: / a hale old age and then a rapid fall. Most of us would probably join the chorus of “Oh that’s the way I want to go”. But what is said in theory does not always hold in practice for those we love; and they may bequeath us the rueful recollection that at no point on that curve / of long diminishment / were you prepared to leave.

The sequence ‘Let us compare cosmologies’ allows a heterogeneous set of commentators to advance their own explanations of the universe’s purpose. A pope opines This Big Bang Theory – its bigness / and its bang – could become official. A travelling evangelist is confident

This is all great fun and I particularly like the optimist, confronted by the theory of parallel universes in which everything that can happen does happen, who believes that somewhere there’s a system / where everything turns out all right. / It could be this one. A baker, on the other hand, is sure that every universe turns out as predictably as a tray of biscuits.

Science plays smaller part in the section ‘Sins and virtues’ in which Major displays her gift for fantasy. This section runs through all seven deadly sins from Avarice, whose vest flaps with credit cards interleaved /like chain mail, to Sloth (a queen enthroned / on honeysuckle pillows) with (sadly) only two redeeming virtues Mercy and Hope. But we are soon back among the ‘Shifting Wavelengths’ of mathematics and logic, tapping into memories of classic paradox tales like the Tortoise & the Hare or Zeno’s Flying Arrow. I particularly like the less well-known paradox of Eubulides which considers How many grains of sand are needed for a heap? This is a case where the notes at the back of the book feel at least as elegant as the poem they explain:

The book’s final section ‘Underworlds’ returns to the longer poem form and seems consistently grimmer than other sections in its exploration of neglected and impoverished places in an urban landscape, such as the downtown mall – the dark end of the pedway where the narrator observes a hooded figure and is

Powerful though these poems are, they do not seem quite to fit into the overall scientific tone of the book (and this might also be said of the ‘Sins and virtues’ section). We do, however, get back to the main theme of the collection in a postscript where Major returns to her earlier question What is God’s place in all this? and imagines God submitting a grant application to the Canada Council to cover her (sic) project to build a universe.

This substantial collection gives ample evidence of Major’s poetic craft and verbal dexterity; and it has been a pleasure to choose the numerous illustrative quotes. If I have a criticism of the book it is that a scientific urge to collate and classify seems sometimes to have taken over. I wondered if there weren’t a few too many small gods gathered in one place at the beginning. Perhaps their singular perspectives on the nature of the cosmos could have been scattered across more of the book? The same might be said of the speakers in ‘Let us compare cosmologies’; and a similar over-fondness for tidiness can perhaps be seen in the grouping together of all the sins and virtues and in the pieces with subtitles like ‘Four questions for winter’ and ‘Three questions for spring’. Elsewhere, Major finds much more subtle means of establishing connecting themes– for instance in the way the surveying tool of triangulation recurs in the book’s title sequence. It is, I think, this sequence which is the finest part of a fine collection.

Paintings by Howard Fritz at The Torriano Alun, Gweno and Freda