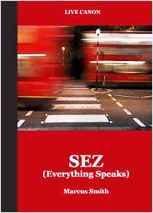 Rather as a life can be viewed as a varied and multifaceted whole or as a series of episodes, SEZ can be read as a collection of very particular poems or as a single kaleidoscopic poem. This is reinforced by the layout of the material throughout the book. For example, page 10 begins with a poem, ‘Shoes’. The last two lines on that page are,

At the bottom of the page is a space that would be sufficient to accommodate the five lines that begin page 11. Those five lines, however, seem to be simultaneously a continuation of ‘Shoes’ and a new, separate, poem. Elsewhere, titles appear part way through poems or at the end of them. Indeed the last word of the book is in the form of a title, ‘Arrival’. Four of the poems in the collection have a lower case Roman numeral above them suggesting a continuity and sequence that is not otherwise apparent. These devices of language and formatting are highly effective in conveying an ‘and/and’ view of our experience as opposed to the ‘either/or’ with which we are so often presented.

There are many ways of writing well. Some of them exemplify the art that conceals art and seek a transparency of language to focus the reader on what lies beyond the words. Marcus Smith shows us how it is possible to write good poetry in exactly the opposite way, by drawing attention to the language used and concatenating different modes of meaning in such a way that the reader’s mind is driven beyond them to a contemplation of the richness of our moment to moment experience and to a perception that much that seems contradictory is only apparently so.

In the poem ‘Intimissme’ the title draws together intimacy and the experience of missing an ex-lover. We are given a series of glimpses of urban life and shown how all of them resonate for the poet with his past and his thoughts and feelings about it.

This is both precise observation and a clear metaphor for the sense of something past, dismantled and now cold. The poem goes on to show us women on buses and in the street, all different yet all reminding the poet of the intimacy now gone and missed. The poem appears to end,

This both is and isn’t the end of ‘Intimissme’. The next page begins with the words ‘(Where are you and what are you doing?)’ right-justified at the right hand margin. There is then a space and we revert to the left margin where there is a stanza about the poet passing through an airport security check where things don’t quite work right but he is let through anyway. We are then taken again to the right of the page with ‘(Don’t call me. Text me.)’ This is followed by,

All of this is clearly distinct from the street scene with shops and buses yet the theme of lost connection and alienation is carried through across the page so effectively that we no longer care whether we have just read one poem or two.

The echoes and continuities that permeate this collection span much greater gaps than successive pages. The use of bracketed, right-justified, statements and questions runs through SEZ. After the five lines at the top of page 11 we have the words ‘(I’m lonely today.)’ in this form. There is then a section where we seem to be in a vehicle that is both bus and cab.

On page 19 we have ‘ii’. This begins with an echo of the malfunctioning airport equipment as a cash machine plays up. It ends with us on a cab journey again and the issue of the way and whether there is a right way.

Finally, SEZ has an excellent range of tone and manner. ‘Hello Doctor’ uses minimalism to evoke a visit to the GP. It begins,

It continues with a series of short phrases that relate to what the doctor and patient might say to each other and to life going on outside the surgery, and ends,

In contrast, ’58 Dead in Cargo…’ spells out what it has to say about desperate people dying while trying to find a better life. It begins,

The whole poem can be found on the author’s website at www.marcussmithpoetry.com and is well worth reading as a powerful comment on an issue of current and enduring concern.

John Snelling has been writing poetry since the 1960s. In 1976, he won first prize in the City of Westminster Arts Council’s poetry competition. In 2013, he gained a Judge’s Special Commendation in The Poetry Box competition for dark and horror poetry. At the 2012 Torbay Festival of Poetry he presented one side of the festival debate. The debate subsequently appeared in Acumen 75. He has had a short collection of poems published, Siren Songs (Nettle Press 2007) and poems in the winter 2013 and spring 2014 editions of London Grip. He has had an article on meaning in poetry and a poem published in Acumen 84.