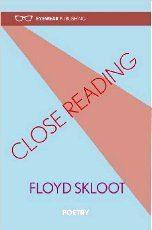 Peter Daniels sees Floyd Skloot’s new collection as a meditation on life and death – and on poetry as a means of dealing with both of them.

Eyewear is establishing itself as a transatlantic press, publishing poets from both sides, which should be able to improve the profile of some of these Americans over here. Floyd Skloot is definitely one who should be better known if only for this 2014 book, but I would like to read his back catalogue too.

Close Reading is very much retrospective in mood, and divided into five sections, thematically distinct but building together into a meditation on life and death, and on poetry as a means of dealing with both. The opening section ‘The Promise of Light’ is a series of imagined deathbed scenes for artists, composers and writers that express the subjects’ creative lives through the moment of death. Jules Verne is hardly in his deathbed at all as he spends his last moments in the balloon he is dreaming above his home town of Amiens:

– while Robert Louis Stevenson is more present in his place in Samoa, savoring the heavy scent / of early September sea air until thoughts of writing about Scotland and its winds send a chill through him and he knows he will be unable to work again. The work of creating in words, music or paint is what these poems are about at least as much as the approach of death, and they set the tone for the whole book, in which Skloot’s life and work as a poet is under his own scrutiny, from the perspective of some need to consider not that his days or his career are over, but that they will be. Accordingly he considers what has made his life what it is, rather as he describes Robert Frost: So now he knows the heart remembers loss / the way the woods remember winter storms.

Part II, ‘The Vanishing Point’, is a series of family reminiscences: most of the people here are evidently dead, including an older brother, described at first without that information in poems about being his younger sibling, until in ‘My Brother Waits’

– and even the poem for his daughter on her 35th birthday is called ‘Almost Equinox’, which is not only for the date she was born, but somewhat unsparingly stating this as the midpoint of her life too.

Unsparingness of outlook while preserving wonder and generosity is what Skloot has been trained in as a poet, as recounted in section III, ‘A Primary Appreciation’ where he pays tribute to his writing mentors and heroes, especially Thomas Kinsella in the title poem ‘Close Reading’ which opens this part and is about Kinsella’s careful teaching of Skloot and his companions:

This is a reminder that in these poems Skloot’s simplicity and straightforwardness of presenting narrative and image is not to be taken as just happening automatically, any more than his technical mastery especially in sonnets is to be taken for granted. His own personality appears to follow how he describes Kinsella, he seemed correct and neat / as a sonnet

Section IV, ‘Vertigo’ contains some of the best poetry about illness since Gunn’s Man with Night Sweats, starting with two third-person poems about a man’s recovery from cancer and dealing with US health insurance, then one ‘The Lost Hour’ about a blackout in hospital – time / could be catching up to me – a man / of sixty but they all say I’m / safe for now, should rise again when I can. However, the rising isn’t so easy when the onset of vertigo plays havoc with a person’s relationship with the world, and five poems cover the six month ordeal of it – I would stand if I could get a grip on / something more solid than undulating air – and yet humour is available despite it all.

The last section is ‘Dusk at the Edge of the World’, and is as elegiac as that sounds. Although the opening poems are summery, it is not only their placing in this section that makes that summeriness suggest impermanence: moments of stillness recur, but time does not dance. / Air stops its breath. Then, That morning my wife and I felt / summer lose its grip (‘Looking Back’), and the tone continues with a Hardyesque melancholy, yet positive, with the kind of tone that the Strauss Four Last Songs achieve, experience allowing poems that use the most obvious human symbols for life and death to be earned, so we are not just watching a sunset:

The last poem, ‘Closing in July’, is like Hardy on impermanence if he had written an unrhymed villanelle which even villanelle-haters should like. Perhaps you have to be over sixty to write this kind of poetry, but I hope you don’t have to be one of us over-sixties to enjoy it (and it took me a few reads to appreciate the subtleties). This is a tremendous book.