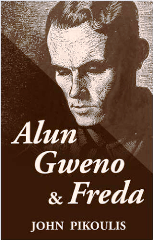 Alun Lewis was one of the two finest British poets who died in the Second World War. I say ‘died’, not ‘killed’, because he never went into action; instead he shot himself accidentally or on purpose on 5th March 1944, aged twenty-eight. This was in Burma, a very long way from the Welsh valleys where he had grown up. He left a few deeply felt poems for his wife Gweno:

‘Goodbye’, which is in several anthologies, describes their last night together, quietly reminding those born afterwards of just how much that generation endured:

The Army concluded that his death had been an accident. He hadn’t wanted to die; he wanted to win the war (and it is true that he hated Fascism) and get home to his wife. That was the official version for several decades, but the story is more complicated.

Alun Lewis was a remarkable young man, a teacher’s son and miner’s grandson who grew up in the 1930s in Aberdare and was deeply affected by the poverty of South Wales. His feelings were strongly left-wing and he was attracted to pacifism. In ‘All Day it has Rained’ he thinks about the quiet dead and the loud celebrities/Exhorting us to slaughter, and the herded refugees, which sounds very relevant today. The war derailed his ambition to be a professional writer, although he published two well-received volumes of poems and short stories in 1942. By this time he had married Gweno Ellis, a teacher at Mountain Ash grammar school, with whom he had a safe and fructifying life. I have a tenuous personal connection, because my husband’s much older cousins were among her pupils and were fond of her. They have both died, but Gweno is still alive at the time of writing, aged 102. She and Alun were parted, forever as it turned out, when he was sent to India as a lieutenant in the South Wales Borderers. As with Edward Thomas, with whom he identified, the war which overshadowed everything was helpful to his poetry.

A great many letters survive. He felt that he would never be a good soldier, and dreaded the thought of killing more than being killed. The sun and the sterility of India, shockingly unlike his native place, produced remarkable poems like ‘The Mahratta Ghats’ and ‘The Peasants’:

Some of his finest work was written on the voyage out and in this brutal landscape, over a year and a half when there was all too much time to think. It was hard to believe that he was fighting for democracy when he was in India as a representative of the occupying power. And there was one more complication. He intended to be faithful to his wife; the superb ‘In Hospital: Poona’ was inspired by the ten thousand miles that parted them. But in August 1943, not having seen her for nine months, he encountered Freda Aykroyd, a glamorous and sympathetic woman whose husband was away from home. Very rapidly they fell into an affair, but he could not take it lightly. Freda had no intention of ending her marriage, and was, in fact, pregnant with her third child. Alun felt committed to Gweno, not out of obligation but out of love. He wrote another great poem, ‘The Way Back’, which was inspired by, but did not name Mrs Aykroyd, and they exchanged intense letters in which he said, I cannot come to you …. in consonance with everything I’ve lived. In the days leading up to his death, when at last there was a prospect of fighting, he appeared to those around him to be very depressed. He made a will leaving everything to his wife, burned Freda’s letters and sent his poems back to Wales where they were published. His bereaved family always insisted that he had just happened to fall over his gun.

John Pikoulis knows more about Alun Lewis than any living person except his widow. In 1984 he published an invaluable biography, Alun Lewis: A Life, which revealed, for the first time, Freda’s part in the story. He had met and bonded with her, and after her husband’s death (she herself died in 2005), she was happy to talk. His problem was that his book was certain to distress Gweno, who never remarried, and many people thought it should not be published in her lifetime. On the other hand, he believed that Lewis was the finest poet of his generation, was in danger of being forgotten, and could not be understood if the facts about his last year were not known. Gweno, as it turned out, had long had her suspicions. She behaved with dignity and did not stymie the book, as she could have done by refusing permission to quote. This (2015) book is not a biography but a study of the poet’s state of mind in the last months of his life and its effect on his work. It includes several letters from Freda, members of the Lewis family and men who knew him in the army, and it argues that he shot himself deliberately and after long thought – which I am sure is true.

I can’t admire Freda. She wrote several emotional letters, long afterwards, which claimed that their very short relationship was the greatest thing that ever happened to him, and that there was only one woman for Alun Lewis to love as he wanted and needed to love and that was me. She also said that she was reluctant to hurt Gweno, but her catty tone is unmistakeable. His wife, she felt, was unworthy of Alun’s love. She was the sort of person who never would have had anything but her marriage to Alun. She, Freda, felt an anger and revulsion which made me want to strike back at her. She did worry that their affair might have been one of the reasons for his suicide.

Knowing these things about Lewis (whose centenary fell last year) will leave most people in little doubt that by early 1944 he wanted to die. He had suffered from occasional depression for a long time. ‘The Sentry’, which he wrote in England after the army had taught him to use a gun, shows a fascination with the darkness:

Alun Lewis was one of those people whom we call a suicide risk but who may, in happy circumstances, avoid suicide. His generation could not avoid the war, which damaged his marriage and equilibrium at the same time as it provoked his best work. He didn’t die fighting, but he was still a war poet and a great one. Seventy years later, very few will be hurt by the truth.