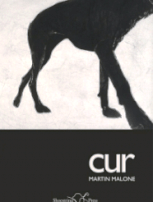 Martin Malone doesn’t mess about; from the arresting cover image of a big-footed headless dog, he crashes into this collection with the title poem. At first glance, Cur, appears to be a pretty graphic description of sex:

On further reading, it could be much more: a metaphor for risk-taking, for the greed that precedes a calamitous fall from grace or happiness, for the anticipation of dire and sudden loss. It is, the poem begins, A tipping point of sorts and later: That point which snuffs out tenderness / with need – ragged and drooling. The finish is foreboding, even chilling:

Brace yourself, reader; what can come next? Several seemingly related poems follow, which could constitute the brief, but hectic roller-coaster ride, of a particular love affair, or even several such. Equally they could be a trawl through the aspects of the ‘universal’ love-affair ranging through hotel rooms, to a peek into a Japanese pillow book, ‘Lovers in an Upstairs Room’ (after Utamaro), to the bucolic ‘Ecologue’ with its recollection of past love en plein aire:

finishing on the inevitable return to the spot where the beloved is among the things I could not see.

On the back cover Michael Symmons Roberts comments, “Any attempt to forge a new nature poetry in the English lyric tradition is a bold undertaking, but Malone’s sensibility and assurance make this possible.” True. In Cur there is Northern toughness and humour, particularly in the poems that are connected to the poet’s upbringing. ‘Egging’ a touching father-son poem is focused on what the boy poet learns from his father about nature. The hedgerow is the father’s cashpoint from which he withdraws the small currencies of wonder. ‘Butch and Sundance Ride Back into Town’ is a narrative piece where father and son have a dodgy adventure on a milk float:

A favourite of mine is ‘Like I was you’re your girlfriend’ where the poet shaves his mother’s head during her treatment for cancer:

What I find most astonishing about Malone is his versatility. He rhymes easily and naturally as in ‘Doing Words’,

while appearing to slip effortlessly between poignant reminiscence, and sophisticated literary material. His suite of ekphrastic poems, which constitute the middle section of the book, are a short course in art education over a period spanning the two world wars and featuring artists such as Eric Ravilious, Wyndham Lewis, Lucian Freud, Magritte, Giacometti and Paul Klee. His choice of artists’ biographical details is as precise as it is tantalising and challenging to readers prepared to do the research to fully grasp each piece.

In ‘Helen and Eric’ after Ravilious, the painter’s infidelity is delicately understated in the way he casually kisses his wife, Tirzah, goodbye to go off for the day with his lover, Helen Binyon: …A last quick / Brylcreem slick in the hall mirror, Tirzah’s kiss / and the grudging chug of an Austin engine … It is not enough simply to know of the artist and the period, everywhere the detail is painstaking: …that Thirties palette? / those browns, a decade-long autumn endlessly / taking leave of the branch…/ Brown Windsor soup, goose-stepping shirts; (‘Pensive Head’, after Wyndham Lewis), the puppet theatre created by Klee for his children (‘Ghost of a Genius’):

Everywhere Martin Malone impresses with his cleverness and knowledge of the nooks and crannies, the lesser-known, the surreal, including a short, moving piece on the Irish potato famine ‘Sweeneys’:

I do still find myself most drawn to the more personal pieces where relationship and nature mingle with tenderness, humour, and sensuality. He ends in this vein with two poems to his son to whom the collection is dedicated, ‘The Inkling’ and ‘Lung Jazz’ which references the poet’s sound world:

This is a varied, skilled, and in my view, important collection; likely, with its wide sweep, to stand the test of time.

.
U.S.-born Wendy Klein has lived in England most of her adult life. Winner of the Havant, the Buxton, the Cannon Poets Sonnet or Not, and the Cinnamon Press Single Poem Prize in 2014/15, Wendy has two collections from Cinnamon Press: Cuba in the Blood (2009) and Anything in Turquoise (2013). She has a new collection from Oversteps due in spring 2016.