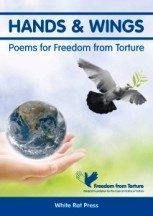 Philip Pullman CBE, author of His Dark Materials, will launch a new anthology with poems by over 50 contemporary and award-winning poets, in aid of the charity Freedom from Torture. 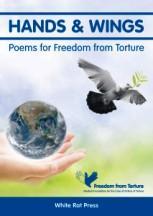 Pullman, who has also written a foreword to the book, will launch Hands and Wings’on Wednesday 25th November 2015 at Blackwell’s Bookshop in Oxford, from 12- 2.00pm.

A perfect Christmas gift, the anthology explores human connections, with other people and the natural world. It reaches out to very diverse individuals and their experiences – from refugees to exploited workers, to the strangers who touch our lives in unpredictable ways.

Philip Pullman says that this “marvellous group of poems” ultimately evoke “empathy”, which he calls “the finest antidote to the cast of mind that makes torture possible”.

Now more than ever, with vulnerable Syrian refugees soon to begin arriving in the UK, many of whom will be survivors of torture, there is a huge demand for Freedom from Torture’s unique services. The proceeds from this book will help fund vital work such as psychological and physical therapies, practical assistance and creative projects.

The book costs £8 (plus £2 p&p). It will be available to buy at the event, or through the Freedom from Torture website www.freedomfromtorture.org or the White Rat Press website www.whiteratpress.co.uk. The Oxford Freedom from Torture supporter’s group thanks all those who have contributed, and Henmans Freeth and Turpin & Miller for kindly sponsoring the book.

We have wrapped the wounded
in warm quilts while
we struggle with hospital corners
Stanley is shaking out
a wave of white cotton
, and I catch a glimpse of Christ
in his outstretched arms.

This is the last thing
we can do for them—a sacrament.
Nothing is more comforting
than the sweetness of clean sheets;
heads laid on soft pillows,
just below pin-ups of loved ones.
Even a priest couldn’t match
the way we tuck them in.

Sole passenger on an early morning tram
I’m half asleep when the driver brakes,
dashes past me, dives into a copse of trees,
gone for so long I almost get out to walk.
Then he’s back, his face alight.
I saw the wren! Explaining
how he feeds her when he can
and her restless, secretive waiting
We talk of things we love until the station.

I tell him of the Budapest to Moscow train
brought to a halt in the middle of nowhere,
everyone leaning out expecting calamity
but not the engine driver, an old man,
kneeling to gather armfuls of wild lilies,
wild orchids. He carried them back
as you would a newborn, top-heavy, gangly,
supporting the frail stems in his big, shovel hands.
These are small things, but I pass them on

because today is bloody, inexplicable
and this is my act, to write, feeling the light
against my back.

About Freedom from Torture
Freedom from Torture (charity no 1000340) is the only UK-based human rights organisation dedicated to the treatment and rehabilitation of torture survivors seeking refuge in the UK. We offer services throughout England and Scotland to torture survivors, including psychological, and physical therapies, forensic documentation of torture, legal and welfare advice, and creative projects. We support torture survivors to speak out about their situation to those in power; and to help break down negative attitudes to those who seek refuge in the UK.