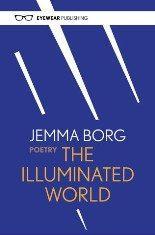 With giant strides Jemma Borg whisks her reader into the dawn of time and out across the universe. Nothing, if not ambitious. I didn’t know this poet when, browsing in a bookshop, my eye was drawn by Eyewear’s striking covers and I picked up her debut collection. I bought it after a few minutes flicking through the pages, seduced by her elegance of form as much as by her content.

Jemma Borg is an evolutionary geneticist and through her lyricism there runs an active, precise imagination , constantly seeking the truth of the matter and using a spirit of scientific enquiry to find it, drawing upon resources from physics, biology and geology.

From the first poem, ‘How it is with the circle,’ we know what to expect. It opens with: Actually it’s just a line and then goes on to explore all the physical attributes of line and circle, leading to a question in the second stanza:

Then in the last three lines, the poem turns surprisingly, facing us with another question, one that informs much of this collection:

Borg revels in high registers and uses terms many contemporary poets would avoid, such as soul, heart, bliss and the Shakespearean our absurd realm; but just as easily she will use conversational phrases such as but I tell you which comes at the start of ‘The lover of Amazonian catfish’. That poem ends with a characteristic sensuality, capturing the sense of wonder of the world and its/our vulnerability that emerges in several of the poems:

Explicit in all the poems is a recognition of our connection to the physical world. In ‘The Cave’s art’, describing the early Lascaux cave paintings, comes the statement There is nothing that is not us.

Borg’s poems explore unlikely associations, often through startling images drawn from the natural world, and sometimes with a self-deprecating humour (which also appears in the inventive titles of the poems) as in ‘A short treatise on a squid’ which explores metaphors themselves, starting with:

There is the danger, of course, that an unusual metaphor can over-reach itself and kill the poem, but I enjoyed this one with its topsy-turvy switch between the position of shark and religious icon (with a possible nod to Damien Hurst’s artwork?) leading us to re-consider the shark’s spiritual and aesthetic value. Through her images, Jemma Borg expresses an ecological awareness of decay, destruction and beauty of the planet, and the relative brevity of our moments of bliss. Her epigraph to the collection is from John Donne and she clearly follows the British metaphysical tradition in her welding of sense and spirit; but wider literary interests also emerge in her poetic conversations with Hopkins (in ‘Vow of Silence’ the first line is: The mind, yes, the mind has mountains…), Rilke, Akhmatova, Elaine Feinstein and Michael Donaghy among others. Echoes of Eliot, Neruda and Celan can also be heard. She uses a variety of forms including sonnet, ghazal and elegy, which all contain big ideas and sing in their own right.

Several poems are about grief and in ‘Can I only tell you about the rain?’ a lovely elegy with a Michael Donaghy epigraph (making what comes next be/what we mean…) she writes of the limitations of words when we attempt to express it:

The book’s last poems shift towards more intimate experiences without losing the scientific enquiry. ‘A Summer Diary’ takes us achingly through a woman’s experience undergoing IVF. The penultimate poem, ‘Goodnight in Bethnal Green’ is also deeply moving, physically present and, as always, precise and truthful:

The words I’ve italicised struck me as being an admirably concise way of expressing the contradictions of love: what we want to express, and so often can’t.

These later poems may point towards a new direction in Jemma Borg’s next collection, which I’m already looking forward to.

Caroline Maldonado lives in London and Italy. Her publications include her pamphlet, What they say in Avenale (Indigo Dreams Publishing,2014) and a co-translation with Allen Prowle of poems from Italian by Rocco Scotellaro Your call keeps us awake (Smokestack Books, 2013)