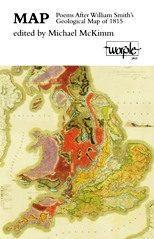 This anthology of specially-written verse commemorates the two-hundredth anniversary of the publication of a map that many might have taken for granted, if they knew about it at all. Yet Smith’s Map was the birth of modern geology and, as I have noted previously here, McKimm’s enthusiasm for the science of the ground beneath our feet has proven to be very a rich seam of poetic inspiration. The collection is a testament to this wealth in the diversity of response from more than thirty contributing poets – a response almost as layered and complex as the strata of the ground itself. This review can be no more than a single shaft sunk into the layers and folds of poetry found compressed into the slim, pale volume.

There are poems here that delight in nomenclature of geology – in fact, most of the poems reserve a moment for relishing a country’s crust and strata, / layer, vein and pore like Isobel Dixon’s ‘The Painted Soil’. Even the words that surround geology become prompts for reminiscence and music, as when Alison Hallett lists the red marl, gypsum, oolite that testify to Smith’s creativity in ‘Mappa sub-Mundi’. I particularly enjoyed John Freeman’s brief but amusing ‘Shades of Hades’, exploring the terminology of a fault plane. He describes his pleasure in plain terms:

A significant part of the value of this collection is in allowing the poets to share the pleasure and meaning they have found in the science of geology. And it is not just the vocabulary of geology that excite, but the ideas. I found Isabel Galleymore’s ‘Sequence’ a beautifully natural poem that emerges from an enthusiasm for the wonder of coal – its latent power and significance and mysterious place in a sequence like a word in a daily phrase. The simplicity of the loosely trimetric form matches the purity of the enthusiasm perfectly. Most poems play with the idea of layering and strata – some visually, like Hallett’s ‘chroma:mapping’, which turns a simple couplet into a vertical exploration of verse form. John Greening’s ‘Complex’ takes layering and uses it dig through the deposits of personal history into unimaginably deep seas.

There is strong parallel in this shared exploration of geology between Smith’s own life or the life of a poet or family – human life – and the rocks that he discovered follow their own patterns and order. David Orchard, in his ‘Clever and Capable Men’, calls this the blossom of biostratigraphic correlation – and if that isn’t playfully poetic, I don’t know what is! But it is everywhere in the anthology, from Freeman’s funny ‘My Brilliant Career’ to the ode to Mary Anning in Elizabeth Cook’s ‘greensand and gault’. But it is Matt Merritt who really explores the greatest breadth of ideas in his ‘Smith’, where the ancestor-geologist becomes an everyman, his experiences parallel to our experiences, from his imagining a map that will remake it [the world] whole to his decision to new-mint words to write a new sort of map – a ‘Map as story’. I think this poem, to pursue the metaphor, is a seam of wonderful thought and language fused together.

One shared metaphor that crops up again and again is the image of the earth – or Britain’s rock – as a body, described in the language of opening a vein / to spill the riches of the long-dead. These words, taken from Jane Commane’s ‘On Discovery’, draw another connection with Smith’s legacy: his is the unravelling of subterranean patterns, and the poet’s is the unravelling of memory and experience.

The diversity of the poets’ response to the map is witnessed by the continuing debate within the collection about the spiritual significance of Smith’s discoveries. Did all his unpicking of the ground lead to burying old myths of Flood and Creation, as Andy Brown would have it in ‘Lithologies/Mythologies’ or the proof of no vestige of a beginning / and no prospect of an end as in Andrew Motion’s ‘The Afterlife of William Smith’? Or perhaps the greatest gift Smith gave us in new translation / is the perfect record of Truth’s imagination, as Maura Dooley expresses in the beautiful and, for me at least, very moving ‘Treasure Island’. There is a lot of thought and cleverness in these poems, but I think I conclude that my favourite are the most effortless, even childlike. ‘William Smith’s Poem’ by Jonathan Davidson expresses, for me, the heart of poetry, geology and all human passions when he writes

The collection contains many more excellent poems I am sorry to be unable to mention or discuss, but like the strata Smith mapped, the juxtaposition of all these very differently-constituted poets only displays their characters more clearly and for that I am very grateful to McKimm, who I think has possibly found a metaphor for the act of anthologising itself. Long live the poetry of geology!