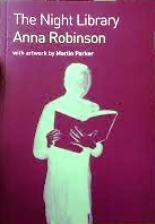 Out of a list of books and pamphlets waiting for a review I chose Anna Robinson’s The Night Library for two reasons. One was my blatant positive discrimination for female writers due to the issues I’ve discussed at more length here  The second reason, however, was quite simply the intriguing title. Show me a writer who doesn’t love libraries and who doesn’t yearn to wander among the stacks in the dark stillness of the night and I’ll show you a liar!

Of course, once the pamphlet arrived it sat on my bedside table for weeks without being opened as life has an annoying habit of distracting you from reading time. Turns out though that the pamphlet was right where it needed to be. Because a time came when I sat on the bed, holding a person dear to me who was upset and sad, while I was out of words to help, muted by the unfairness of life. But there was the book, within arm’s reach, and so I picked it up, said: “Shall I read a bit?” and opened it to the first poem. It began so:

“Oh,” we thought, “yes,”’ and held each other tighter. I read through most of the pamphlet that day. Some poems we really liked, some less so, but all were intriguing, transporting us briefly beyond the messy bleakness of everyday to a place more orderly and magical. Without a doubt, the very first one remains by personal favourite as the idea of words that swarm and buzz – spin heat and light is irresistible.

But it’s not just words that reveal their secrets to the reader’s voracious gaze.

We are somewhere in Italy, the narration discloses, slyly. This is unclassifiable. The librarians on these pages, birthed by places too numerous to mention, come in as many varieties as the books they guard. One lies awake in his underpants, dreaming up endless shelves, another one mixes up stain removers, late going home. They love…

…and are loved in return.

The libraries too, far greater than the sum of their books, have their stories to tell. They are limitless, burning, or made of stone, protected by ivy and little birds that are the indexers and can sing you any précis you like.

And never before has the decimal system sounded so, well, poetic:

Anna Robinson’s well-crafted poems are accompanied by Martin Parker’s delicate drawings that effectively bring the collection to life, enhancing the dreamlike symbiosis of libraries and those of us who love to dwell in them. I recommend you step in to The Night Library and allow yourself to get indulgently lost.

Kat Soini is a Finn living in the UK, trying to keep a foot in each country but often falling somewhere in between. An over-educated academic by day, she’s been writing fiction and poetry for a long time and is finally getting organised enough to actually put it out there for strangers to read. Recent publications can be found in poetandgeek.com, The Missing Slate and Glitterwolf.  A geek at heart, she is fond of all things otherworldly as well as woolly socks, cats, tulips and cinnamon-hazelnut coffee. Kat blogs at https://katsoini.wordpress.com