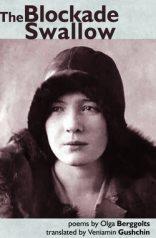 Poetry Review – THE BLOCKADE SWALLOW: Merryn Williams is amazed by the poetry which Olga Berggolts was able to make out of her tragic life

‘No one is forgotten, nothing is forgotten’. These words, from a poem by Olga Berggolts, are inscribed on the Leningrad memorial to the million and a half people who died during the siege of 1941-44. And who was Olga? She was a passionate Communist, born in 1910, who was brutally treated in the Stalinist terror, losing a baby in prison, and then enduring the dreadful siege. One of her husbands was executed, another starved to death and all her children died young. It seems miraculous that she managed to live to the age of sixty-five and write inspirational poetry.

I don’t know Russian, but have found that poems often leap the language barrier if they have something important to say. This is a bilingual selection, in no particular order, of Olga’s poetry before, during and after the war. She worked on Leningrad radio, broadcasting to the citizens whose privations she shared, and of course her blockade poems stand out from the rest. The voices of women predominate. ‘Song of a Leningrad Mother’ was written in August 1941:

The poem ends with the grey-haired mother defending the city herself, armed with a hand grenade. We may well be disturbed by the image of women encouraging their sons to go to war, but this was about survival. In another poem, Olga talks over the phone to her sister in Moscow and shares happy memories of their childhood, assuring her that they will meet again. She remembers her little daughter who died in the town of Pushkin (Tsarskoe Selo) and swears that one day she will go back and mourn properly. In ‘Conversation with a Neighbour’, written four months into the siege, when people were on basic rations, she says:

This poem is so good because it acknowledges people’s feelings of despair and helplessness; she knows how easy it would be for herself and her friend to give up. But she promises that one day, they’ll meet again; the war will end, they will enjoy good bread and good wine, and there will be a statue of a woman civilian in the city square. She gave a voice to ordinary people living through a nightmare and their astonishing powers of endurance.

Olga died in 1975, having, so far as I can make out, been divorced from her third husband. She had worked hard to make sure that the siege of Leningrad would never be forgotten. Some of her other poems, however, could not be published until the political thaw that started in Khrushchev’s time.

Incidentally, the ‘blockade swallow’ named in the book’s title is a badge that several citizens wore during the seige when no letters could be sent or received. It is a small tin bird carrying an envelope in its beak.