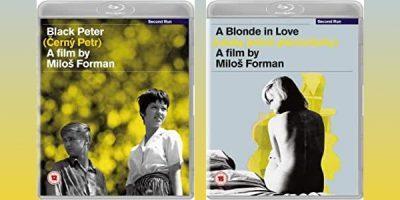 Re-acquainting myself, after many years, with 1965’s A Blonde in Love was akin to meeting an old friend and seeing how much they had changed.  Of course this is a film now digitally restored to ward off celluloid decay: flesh gets a better deal on film than real skin.  Would this movie blonde (Only one love please and not the sexy, but wrong, American title, Loves of a Blonde) still prove enchanting?  Yes, Forman’s film remains fresh and engaging: its bitter sweet perception of the tribulations of young love having now matured, alongside of my own maturing self.

Andula (winningly played by Hana Brejchova) is the young blonde factory worker.  Today she’s an East European icon of illustrated World Cinema books.  Three or four generations of cinephiles have seen the reproduced film stills of the naked Andula, with her man, for the night, carefully draped over her bodily parts as Milda (Vladimir Pucholt) tells her that her body was ‘like a guitar done by Picasso.’ Hana may not have had a great acting career, after A Blonde in Love, but her image in this exquisite comedy drama, will long live on.

The film tells a simple story that’s the stuff of rom-coms or puppy love soap opera.  Yet A Blonde in Love gracefully transcends all that.  Milos Forman was a master of social observation.  Casting mainly non-professionals over professional actors he was able to coax out a compelling authenticity.  All the performances in A Blonde in Love chime together so well and true.

In the town where Andula lives women outnumber men by 16-1.  The factory supervisor arranges for an army officer to hold manoeuvres near the town and order the soldiers to attend a big dance where the women my find ‘’the young men of their dreams.”  Unfortunately it’s not the young males who turn up but the balding, middle aged reserves, already married, and eager for a night of seduction with the women.

Forman and his scriptwriters orchestrate the dance crowd movement and table talk in a masterly fashion.  Much affectionate comedy is displayed.  Strikingly the moment when a soldier removes his wedding ring then accidently drops it on the floor where it rolls away.  His pursuit takes him to the underneath of a table and three seated women.  Forman directs this with a balletic skill comparable to Chaplin (Forman was a great admirer.)

However the most prized humour of the superb A Blonde in Love isn’t slapstick but its tone of neo-realist farce: Milda is forced to share a bed with his disgruntled parents (The hopeful Andula has arrived, late at night, at their home, and been given Milda’s bed).  The family bedroom scene is hilarious not simply because of its exact body language, constant tossing and turning and sharp dialogue.  It digs in deep with screenwriting examining socialist and family generational conflict – here loving parents attempt to absurdly over-control the morality of their cavalier ‘freethinking’ son.

As Andula searches for the right man to rescue her from her dreary life, in a factory town, we realise she will make the wrong choice, be let down and hide her disappointment by putting a false gloss on her sexual encounter.  Yes, Milda, the pianist in the band, is sexually promiscuous.  But if on the surface Milda appears to have a more glamorous existence, than Andula, his freedom also has its limits.

Ken Loach reveres A Blonde in Love.  He watched it before directing his celebrated TV film Cathy Come Home.  Forman’s sensitive and unpatronising view of working class life became the template for Loach’s filmmaking.  Commentators on A Blonde in Love tend not to mention the factory scenes.  I’m sure Loach did.  They are very brief but important.  The supervisor affectionately patrols the shoe production line.  He approaches Andula and places a friendly hand on her shoulder as she places the seal of quality control on a pair of women’s shoes.  Near the end of the film we return to the working Andula (after her boyfriend disappointments) and without ever labouring the point Forman allows you to consider the Cinderella metaphor – minus any fairy tale dressing.  The correct shoe will be the ‘right fit’ for the ‘right man.’ It never happened to Andula.  Yet the dream of it happening, for genuine love and not for any socialist political convenience, hopefully lingers.  And as for the whole film, well it’s unforgettable.

Black Peter (1963) was Milos Forman’s first feature film.  First love and its shy, embarrassed attempts at dating are beautifully entwined with the experience of having your first job and a generalised critique of the state system.

Sixteen year old Peter is employed as a store detective in a small supermarket.  He is awkward and gauche.  The manager wants him to “keep an eye” on the customers.  This surveillance idea is carried over to Peter’s father who relentlessly harangues his son about his social life and work (whilst being very funny moments they’re also disturbing for father appears to represent not just a patriarchal but a quasi-authoritarian control.)

A further example of Chaplinesque humour occurs when Peter pursues a supposed shoplifter along the streets, fails to confront the suspect, then eventually gives up and goes home.  Later on we learn that this man is a bureaucrat friend of the shop manager.

As in A Blonde in Love Forman beautifully sets up a dance sequence which reveals the ‘aggression’ between Peter and a younger man named Cenda (Vladimir Pucholt) who’s drunk and hopeless at dating women.  He also has a romance between Peter and Pavla (Pavla Martinkova-Novotna) only to puncture its already questionable progress – when Peter is walking away from Pavla’s house she calls him back, but not for greater intimacy but to ask Peter if the shop he works at sells gherkins.

Black Peter comes across as a series of very entertaining vignettes about youth and authority.  And as such it feels a bit sketchy – though Forman is already revealing great sympathy and empathy with a generation who will demand much more than the basics that their parents received.  Music is important to both films.  A Blonde in Love has a pop ballad to begin and end its narrative.  Black Peter also has pop songs, one being a satirical rock version of Tchaikovsky’s Nutcracker suite.

Black Peter is one of the first early sixties films of covert dissent and ushered in a new kind of Czech cinema.  It is a remarkable calling card.  But A Blonde in Love is Forman’s even more confident realisation of his original tender, angry and humane authorship.  Both are essential viewing.