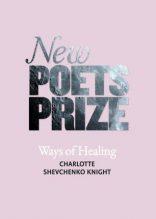 Charlotte Shevchenko Knight’s poems explore conception, the end of an affair and loss. They are not dismal but push their speaker and readers towards the light at the end of the darkness. There’s a sense that however grim today is, there’s hope, which might not arrive tomorrow, but it is on its way. ‘Moondaddy’ shows one way of beginning to think of the future

However, the “it” doesn’t appear to have been conceived in love,

Two people barely speaking and drifting apart are not in a position to become parents. Although the last line could have two readings – firstly the “it” was created as a relationship fell apart or secondly that it was not properly formed and was doomed not to reach full term.

This paints a picture of a woman out of sync with her world and the relatives who assume the relationship is happy enough to produce children. The woman is unsure of whether she wants to fulfil her role, whether she wants to be mother or comforted like a child. The books don’t seem to be much help. She is trying to work on herself when stuck in a dying relationship with someone unsupportive who seems happy enough to drift along while making little contribution. It seems as if she’d be better off with someone intervening and telling her to stop trying to please others and figure out what she wants.

Black onyx crystals are used for grounding and self-control. The speaker is trying to regain control instead of drifting. It’s also a symbol for sadness and, in some cultures, bad luck. Pushing her hands into the sand points to the symbolism of grounding. The speaker has reached a turning point.

The theme of rituals and symbols is picked up again in the title poem,

The reasoning behind these suggestions is that they give someone who feels powerless a sense of agency and the ability to do something probably harmless that makes them feel as if they have started to lose the sense of hopelessness and find a path towards a solution. The rituals buy time for emotional healing and offer possibilities.

These poems are haunting: after the book is closed, ideas or phrases surface again prompting either a return to the poem or thoughts around their subject. Shevchenko Knight bears witness to early womanhood, first love and the vulnerability both entail. Ways of Healing has a lyrical, persuasive tone that refuses to dictate to the reader.