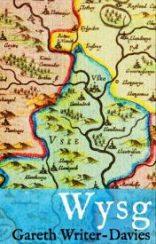 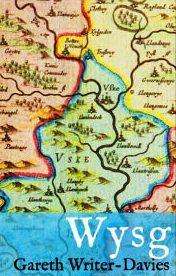 Those who are familiar with the work of Gareth Writer-Davies will immediately recognise his pared back, stark writing style in this, his fifth collection. The delightful cover includes part of the 1645 engraving by William Blaeu depicting old Monmouthshire, immediately setting the scene for a journey along the banks of the River Usk.

In his first poem ‘Water Under the Bridge’, we are reminded of the power of water and of the way a river flows where it will. Writer-Davies compares this to the course of our lives, the way it is impossible to predict the direction of flow, “to hold a moment of water in your hands”.

Writer-Davies examines his relationship with the river, its sound “a cacophony of glass bubbles”, and considers the workers, the animals, the language and culture he encounters as he explores the area through the changing seasons. Of course, if you live in near a river, it is inevitable you will find rats: hence, in ‘Tooth & Claw’, the poet has to “be the master” and rid his house of the creatures and their smell:

Later in ‘Rats’, the poet is kept awake by their “bantering and scurrying” and places bait as if he is “the God beyond the plasterboard”.

In Wales you are never far from religion and the impact it has had on the way of life and on the landscape. There are churches, chapels, graveyards and ruins scattered everywhere if you take the time to find them. Writer-Davies muses on our humanity and on our short time alive in ‘A Fatal Mistake’, speaking of neing afraid to “wake/buried in an unmarked grave and forgotten thoroughly”. Even the great and the good, memorialised in stone like the soldier in ‘Knight, Knight’, meet their end and lie “aslumber/in his petrification of seven hundred years and two thousand sermons”. We’re a long time dead.

Another feature of this journey through Wales is the reminder of how the Welsh and English have fought it out over many years, establishing and re-establishing borders. On his trip to Tretower Hall, Writer-Davies cannot help but recall scenes from a Japanese film and in ‘Kurosawa’, he sees “a hundred samurai ride out/banners unfurled, swords sharpened, breathing fire” and questions his own longing for home or hiraeth as it is known in Wales.

The collection includes many references to plants, fish and birds. Writer-Davies notes rather beautifully in ‘Flora’ that:

The line breaks are themselves in ‘unexpected places’ here, adding a note of irony and careful wit.

If you want a poem that is playful in its use of language, both English and Welsh, look no further than the title poem ‘Wysg’. Here the poet invites us to think about the origins of words, their roots, their meanings. How marvellous to find the word ‘cochgangen’ meaning chub (a kind of fish), and ‘cognate’ meaning related or of the same origin. Take care if you dare to look up ‘Wysg’ as the urban slang meaning might surprise you!

The poet does not only venture into the past in these pieces, but brings past and present together such as in ‘5G’, where he finds “a strong, powerful signal” enabling him to take photos and share updates on social media. However, he is clearly struck by the beauty of water “running/four different ways down the darren” and knows this belongs best in a poem.

The final three poems in this collection return to thoughts of our existence and to our inevitable demise. This is territory quite often on the poet’s mind it seems to me. Maybe standing in the midst of such stunning ancient landscape is drawing him to feel he wants to stay put and to try to “catch what the water is saying”.

Throughout the book, Writer-Davies is on a mission to learn, to delve, to draw meaning. He is careful to take the reader with him, to help us share the many wonders he finds. I feel the poems are celebratory in many ways, familiar at times in their description of natural wonders, and revelatory in the writer’s own discovery of language and imagery. Writer-Davies gives us endless ambiguity as the writing constantly bounces between different meanings, layering the possibilities, “words flowing/from mouth to the many tongues of the sea”.