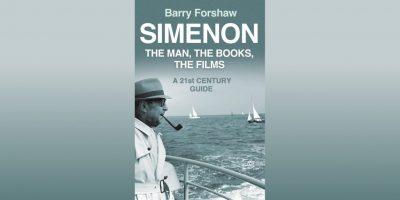 Simenon The Man, The Books, The Films by Barry Forshaw

I came very late in the day to the works of Georges Simenon.  It was five years ago whilst talking, with a friend, about the early 1960’s BBC TV series of Maigret (then impossible to find anywhere but now on Blu-Ray) when I picked up my first Maigret novel.  It was The Misty Harbour (1932) newly translated by Linda Coverdale in Penguin Classics (2015).  This story of a disturbed man found wandering the streets of Paris, with no recollection of who he is or how he got there was remarkably compelling.

Its brilliantly condensed and deceptively simple prose, packed with such acuity of psychological insight, took my breath away.  I devoured the book in a day and a bit (you wont be satisfied with a sole Simenon, only your first batch of half a dozen, read over several weeks, will suffice, for he is so readable) and then took stock to analyse its power.

Unlike more conventional crime writers a litter of pragmatic clues to the mystery proved unimportant.  The reasons to why, according to the Penguin Books blurb, these quiet citizens of a small harbour town are concealing a “poisonous malice” were obviously clue-full.  But the clues followed on so naturally behind the revealed vagaries of human behaviour.  It was the subtle process of psychological unravellment, the unearthing of motives and self-discovery en route that mattered much more.  ‘These fellows…the trouble they caused me, with their half truths and evasions!’ sighed Margret.

Through my subsequent reading of five Maigret novels Chief Inspector Maigret never condemned or moralised about his suspects, criminal associates, relatives or victims (whether dead or surviving).  What we do have is Simenon operating much canny wisdom through his detective character.  Maigret has a dispassionate mode of reasoning and a remarkable empathy.  As Simenon says of him.  ‘My motto, to the extent that I have one, has been noted often enough, and I’ve always conformed to it.  It’s the one I’ve given to old Maigret, who resembles me in certain points ‘understand and judge not.’

And this non-judgemental approach can be found in the non-Maigret novels – Simenon’s romans durs (“tough novels”).  Simenon is a great writer of moral complexity whose story positioning is one of sharp objectivity and detachment.  But he’s never cold: frequently tragic, sometimes pitiless, capable of a relentless frightening exposure of character and yet remains calmly philosophical.  Very few adjectives are to be found in Simenon’s prose, to console or melodramatically excite the reader.  His writing can be as nakedly honest and pared down as a Beckett or Camus.  And Simeon at his best is as great as those two giants.

Take the powerful and very bleak, The Snow Was Dirty published in 1948.  Not only Camus but Kafka is evoked.  Set in a city under military occupation it’s the story of nineteen year old Frank Friedmaier – a thug, thief and son of a brothel owner.  In the opening pages of the novel Frank kills his first man and is chillingly indifferent.  He then commits a string of violent and sordid crimes.  Frank’s consciousness turns into a wretched and abhorrent place infected by brutality and confusion.  We are beyond crime novel territory in The Snow Was Dirty and into an obsessively psychological ‘horror fiction’ of cruel intent and desire from which Frank can never escape.  Simenon felt this novel should have been awarded the Nobel Prize.  It wasn’t.  Yet the nominee, in my opinion, wrote a masterpiece.

I must now introduce Barry Forshaw’s admirable Simenon The Man, The Books, The Films.  Some of the points, which I’ve briefly made about Simenon’s work, are comprehensively covered in Forshaw’s fine book along with much more fascinating information on every aspect of Simenon’s life and work.  This is not a biography and more than a pocket guide, more a succinct Simenon primer.  Forshaw writes very well and engagingly, allowing interviewed writers, publishers and editors to speak about Simenon.

We have a brief biography; Maigret’s Paris (a tour of the locations associated with Maigret); adapting Simenon for radio; translating

Simenon; plots and commentary on all his books (and there are hundreds) and how Simenon has fared on TV and cinema screen.

I felt only two things were missing from the book – a list of the books and articles published on Simenon and that Oldcastle Books could have given us some photographs of Simenon and maybe the actors who’ve played Maigret (of course the general consensus is still that Rupert Davies’s portrayal in the BBC TV series remains unsurpassed.)

Forshaw’s Simenon The Man, The Books, The Films is the ideal companion to Simenon.  An exemplary and insightful work of reference that I highly recommend.