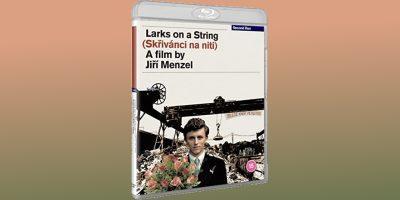 The first shots of Larks On a String are grim and determined.  Smoke belches out of the huge Kladno steelworks in Czechoslovakia.  The camera slowly pans, accompanied by an electronic hum, over its ugliness.  This could be a colour image from Antonioni’s The Red Desert (1964).  A title declares that the victorious February of 1948 has seen the establishment of a Soviet socialism.  The revolution has occurred yet the dissidents must be re—educated.  To lyrical orchestral music the camera tracks, in a Tarkovsky manner, over the waste of a scrap yard.  It rests on a man, lying indolently on the scrap, watching a barber cutting the hair of a seated, balding man.

The works supervisor introduces these men and other workers: an ex-barber, former public prosecutor, a sacked chef, a dismissed professor of philosophy and saxophonist.  This bourgeois group, along with a group of vivacious women workers, will smelt the scrap for re-cycling (“Iron, the blood of our five year plan” says a banner.)  When asked how he is today the professor says, “I’m getting better thanks, spiritually at least.” The supervisor then tells the film director, who’s turned up to make a documentary, that communism aims to smelt these people into new men and women.

The filming is interrupted by the foreman who asks the workers, who’ve gone on strike, to return to their work.  They refuse and filming stops.  During their meal break the young chef attempts to communicate with a woman worker.  A police guard intervenes and stops it.  There’s a cut to the recent marriage ceremony of the policeman and his Roma gypsy woman.  From the dry wit of the scrap yard scenes we are thrown into the wild antics, of a wedding reception with wine ceremoniously poured over the heads of the couple, with the jealous groom looking unhappy.  Afterwards, inside their Stalinist state apartment, groom pursues bride, accompanied by ballet-like music, as they try out the electrics and playfully flush their new toilet.

These opening twenty three minutes of Larks on a String are exhilarating.  They set the tone for the rest of this marvellous film whose lyric and comic surface has a deceptively light touch barely masking the pain experienced in its totalitarian landscape.

Alongside of much tragic comedy flows the charming romance of Pawel (Vaclav Neckaf) and Jitka (Jitka Zelenohorska) desiring to be married before the state intervenes.  Pawel is to be sent to prison for two years for addressing a befuddled politician about the disappearance of “Milkman” one of the workers.  So the marriage is a surrogate one.  An elderly woman stands in for Pawel’s bride.  Whilst Jitka’s groom is replaced by a bureaucrat with his official form.

The couples’ not being together for the ceremony is at first absurdly funny until Pawel’s supplied woman is asked to leave.  Then the young man’s mother breaks down and cries, exposing the emotional cruelty.  It’s a moving and key scene in the film, a dark occurrence exposing the inept mindset of those who’ve created such a crazy socialist arrangement.

Larks On a String is based on stories by Bohumil Hrabal who co-wrote the screenplay with director Jiri Menzel.  Hrabal is one of the Czech Republic’s most famous 20th century writers.  Menzel also made a film of Hrabal’s novella, Closely Observed Trains.  A well known film and box office hit that was awarded an Oscar for the best foreign language film of 1966.  Sadly though Larks On a String was made in 1968 it was banned and not released until 1990 when it won the Golden Bear at the Berlin Film Fesival.

Both films share a playful sense of the erotic.  Both are satiric and tragic.  Both are warm and deeply humane films.  Given the great esteem held for Closely Observed Trains it might appear heretical to say that I think Larks On a String is the greater film.  It’s just as funny as Trains but I think Larks is more ambitious and deeper.  You could say that the film wears, though never didactically, its philosophy on its sleeve (The Professor quoting Immanuel Kant in the labour camp) for that moment and others, especially when he and his fellow workers are punished, by being sent to labour in a coal mine, the dialogue operates like blank verse.

“Fate forbids me to refine my philosophy” declares the professor.

He then speaks of his experience as being a purifying fire that’s given him a great happiness.  A remark understood by his workmates, and this watcher of the film, as being stoical courageously defiant, spliced with irony but exempt of bitterness.

Larks On a String is an extraordinary humbling and affirmative film.  Late in the day it should now be acknowledged as a classic of the Czech New Wave.