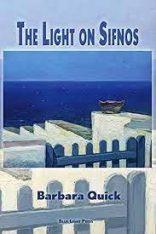 Poetry review – THE LIGHT ON SIFNOS: Charles Rammelkamp reviews a collection by Barbara Quick which travels through both time and space

Barbara Quick’s poems “break the rules of time,” as she writes in “The Bus to Apollonia,” transporting the reader to the enchanted Aegean island of Sifnos to contemplate mortality and humanity in this idyllic setting where she and her partner have gone on what amounts to a pilgrimage. As she concludes the final poem of this lovely collection, alluding to Homer’s epic, The Odyssey, “The Feeling of Earth on My Fingers”:

This may all be a “trick of light,” after all, casting us back to the timeless world of Greek mythology. In the title poem, indeed, Quick notes that “the dawn really does have rosy fingers” that reach down to touch tender human skin,

In The Odyssey, Homer describes dawn as rose-fingered almost two dozen times – it’s a familiar epithet to even the most casual reader of the Greek epic. Thus, from the start, Quick has framed this collection as a pilgrimage. This is nowhere more explicit than in the poem, “The Pilgrims’ Road,” ostensibly a poem about a hike up and down the glorious mountainsides of Sifnos. It’s a poem full of questions about the journey. “Who will guide us…” “How will we manage…”

Clearly, Quick is talking about more than a traipse up and down a hillside! Questions about our ultimate destiny and legacy abound throughout these thoughtful poems.

In the timelessness of Sifnos, where the pilgrim has come unstuck from the relentless sequence of linear time, Quick encounters people from years before, including her mother (“The Bread My Mother Gave Me”), her father (“My Father’s Maritime Compass”), her older sister who died when the poet was only eight years old (“The Poem My Sister Might Have Written Here”). In the already-mentioned poem, “The Bus on Apollonia,” where she explicitly alludes to the broken rules of time, Quick encounters her friend Jude, “thirty-five years younger / than you are now.” Quick is in the present, of course,

Jude’s son Jordan was murdered years before, a tragedy nobody ever gets over, but “I wanted to protect you / from the sorrow in your future.”

Quick also vividly describes memorable island characters, including “Old Men on Their Motorbikes,” “The Farmer-Owner at His Bistro,” “Christos, Who Collects the Trash” (“Kalimera!” – Good morning! – he calls out to every passer-by”), and especially “The Mad Car-Washer of Kamares,” who “evokes the ghosts of Ancient Greece,” joys brief and violent, “whose only comforts were women, drink and sleep.” He is constantly at war with his boss, Apollo, owner of the rental cars that the tourists drive around. “They shout at one another. / It sounds as if they’ll come to blows.”

“Skinny-Dipping in Vathy” is a singularly lovely poem in which two people (the poet and her companion?) throw caution to the winds to revel in their nakedness, bathed in the “turquoise blue Aegean Sea… / with the power to heal / all kinds of wounds.”

The poem’s implicit reference to The Odyssey here gives pathos to its loveliness.

Barbara Quick takes us on a mystical journey through fluctuating time in The Light on Sisnos, winner of the 2020 Blue Light Press Poetry Prize. Comparing herself and her partner to Telemachus, Odysseus’ son whom the goddess Athena guided on an excursion to gather information about his father’s whereabouts, Quick wonders, in “What News Awaits Us Here?”, just as their own pilgrimage is starting:

Quick’s discoveries in the light-drenched land of Sifnos add up to breakthroughs we all must make in the journeys that make up our brief lives on earth.