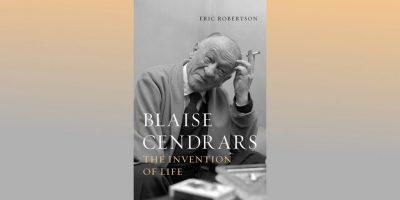 “He repeatedly expressed impatience at the demands of being a writer, preferring life spent outdoors, travelling or in the company of others to the solitary confinement of the writing desk.  Cendrars was widely photographed, most famously by Robert Doisneau, but never at a writing desk.”
Eric Robertson

I love that Blaise Cendrars, one of the leading writers of early European modernism, and later on much literary innovation, hated to be photographed writing.  It would be against the spirit of a man, who was constantly on the move, whether by ship, train, boat or humbly walking the streets in order to have subjects to write about.  Cendrars’s priority was to be always deeply engaged in life and explore the world.

So who is this Blaise Cendrars (1887 – 1961) the Swiss born restless traveller who augmented his peripatetic existence with a huge body of writing?  His real name was Frederic-Louis Sauser.  Only later did he adopt the name Blaise Cendrars.  “Blaise” recalls the English word blaze, Cendrars is a compound of the French word for cinders and “ars” meaning art.  So we have a phoenix bird rising from the ashes: a well balanced practical being, constantly re-inventing himself, who scorned the idea of being a sedentary man of letters.

The poetry, stories, film scripts, essays, radio plays, novels and autobiographical writings, audaciously challenging norms of form and content, poured out of him.  Cendrars also collaborated with painters, a film director, cinematographers and photographers to break new ground: artists such as Chagall, Leger, Sonia Delaunay.  Writers like Henry Miller (who venerated the expressive energy of the man) and John Dos Passos (whose novel trilogy USA is heavily influenced by Cendrars’s style.) Apollinaire was known to have made changes to his own, about to be published, poetry once he’d read Cendrars’s Les Plaques a New-York (1912).  And Cendrars even assisted Abel Gance on his 1923 railway film drama La Roue (The Wheel.)

Although early on Cendrars flirted with the surrealists and Dadaists he wasn’t a man to join movements.  Cendrars was far too much of an individualist and artistically mischievous for that.  As a creative explosion he is a spiritual heir to Rimbaud, without the abrasively anti-social manners of Rimbaud.  A visionary both content to be solitary and exceedingly gregarious (Henry Miller admired both those qualities.)  You might even say this tense split in Cendrars’s personality remained well balanced yet never boringly so.

Eric Robertson’s book attempts to tackle the often messy (for a biographer) contradictory existence of this remarkable writer.

As an example of what Cendrars creatively achieved this book is exemplary.  Robertson conveys great, but never uncritical, enthusiasm; exact scholarship and an insightful reading of Cendrars enhanced by

his own fine English translations of French quotations.  However there were times when I felt I wanted Robertson to biographically give us more of the elusive and restless personality of Cendrars and his effect on others.  His personal relationships are presented in this book but not investigated with the same depth that he gives to Cendrars’s prolific and uncompromising output.

However Robertson rightly returns to the important fact that Cendrars lost his right arm in 1915 fighting in the First World War and that this profoundly affected Cendrars subsequent career as a writer (He taught himself to write with his left hand.)  In 1946 La Main coupée appeared which draws upon Cendrars’s experiences as a soldier in the trenches.

We are presented with a horrifying and surreal moment that must also be referring back to Cendrars’s injury.  “We had jumped up and were looking in stupefaction at something only three steps away from where Faval was standing: planted in the grass like a huge flower in full bloom, was a scarlet lily, a human arm streaming with blood, a right arm severed just above the elbow.  The still-living fingers were digging into the soil, as if trying to take root there and the bleeding stem was waving gently in the air to balance itself.”

This is startlingly brilliant writing (It recalled for me the surreal moment of panic in Georges Franju’s film Thomas the Imposter where a terrified horse, with its mane on fire, runs through a French village, near the front, during the Great War.) Cendrars’s imagistic prose and poetry is often as memorably cinematic.  Indeed all his work has a spontaneous filmic energy.

I can’t finish this review on that psychic scar.  Instead I’ll return to the early poetry of Cendrars (of which Robertson writes of very well.) Prose du Transsiberian et de la Petite Jeanne de France (1913 -14) – a famous collaboration between Cendrars and Sonia Delaunay about imaginary train journeys.

I deciphered all the garbled texts of the wheels and united the
scattered elements of a violent beauty
Which I possess
And which drives me.

Cendrars’s train was his mind and body capturing, through the windows of his observant eyes, whirlwind impressions and sensations.  His restlessness and compulsive travelling, physically and internally, makes for a fragmentation, sensuality and wit that are still very modern.  And Robertson’s excellent book does the amazing Cendrars great credit.