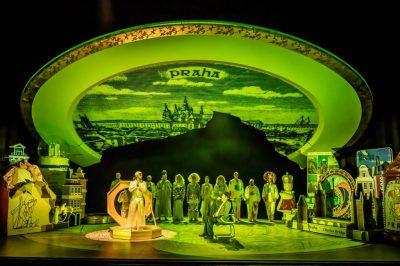 The Excursions of Mr Broucek

The Excursions of Mr Broucek is an opera like no other – or as Wasfi Kani, the founder and power behind the bold, brave and never daunted Grange Park Opera, puts it: “Cosi fan Tutti it isn’t.”

As such, it does not deliver the usual rewards of a great emotional release and overwhelming joy or sorrow.  The closest thing to a moral message is that any hope of a happy outcome is just the illusion of a drunken fool.  In our uncomfortable times, however, acknowledging that somehow gives relief, especially when the production is a triumphant achievement of Janácek’s stated aims to “get to the core of the irony and sarcasm” and “to pluck out a smile of agreement on the face of the listener”.

Given a zany plot that shoots its unheroic central character to a moon peopled with pretentious art-lovers and then back to the cruel, crusading Middle Ages and makes a virtue of anachronism, we are more than willing to accept David Pountney’s updated libretto.

It references partygate, “another Boris balls up” and Vaclav Havel, all born long after Janácek managed to first stage Mr Broucek in 1920, following a decade of struggle to get Svatopluk Cech’s novellas moulded into operatic form.  It also sends up the critics and corporate sponsors who are doubtless in the audience and ridicules surtitles even as we read them.

As Janácek wrestled with a series of librettists, his friend Max Brod advised the piece would only work as burlesque.  In that spirit, the humour of Pountney’s production, with set design by Leslie Travers, is broad.

The theme of beer and drunkenness is writ large.  We have a Pegasus made from a giant beer can, the 15th-century burghers and fighters glide around on stacks of beer crates, looming over Mr Broucek and exaggerating his lack of height as he drinks away the rent garnered from his property that is mortgage-free – his one proud boast.

Almost confusingly and definitely soothingly, any lack of stature, moral or physical, is offset by the outstanding lyricism and harmony of Janácek and the cast’s musicality.

Peter Hoare gives Broucek a voice that belies the littleness of his personality, while Malinka, the Sakristán’s daughter (Fflur Wyn) and her painter-lover Mazal (Mark Le Brocq) harmonise perfectly, regardless of the ups and downs of their relationship.

London Now and The Art of Literature. Review by Barbara Lewis. Blaise Cendrars, The Invention of Life – Eric Robertson. Review by Alan Price.