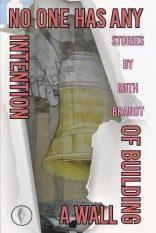 NO ONE HAS ANY INTENTION OF BUILDING A WALL

NO ONE HAS ANY INTENTION OF BUILDING A WALL: James Roderick Burns finds considerable power in a slim volume of short stories by Ruth Brandt

Much of Ruth Brandt’s short story and flash fiction collection, No One Has Any Intention of Building a Wall, is written in the present tense, an approach which at first glance can be slightly jarring. But over the span of 18 stories it resolves into an inspired choice: dedicated (beyond family and friends) “to everyone who finds themselves on the outside”, these are urgent investigations of the misfit, the wounded, the alienated, the damaged and the lost – precisely those people society deems expendable, and of no further use. For Brandt, that dismissive attitude makes telling these stories all the more pressing, and the resulting immediacy and punch of the present tense serves this purpose.

The opening story, for instance – ‘Happy ever After’, with even its title freighted with a sense of foreboding – finds one of the two main characters, a desperate mother and damaged son, pausing in a typical liminal space, a week after his disappearance:

As the story moves to its conclusion (alienation scored in by the world’s reaction to disability eating away at Alf’s mental state, relationships and finally his ability to care about another human being at all) each part of this extraordinary marker-paragraph is fleshed out: most clearly, Alf himself is discarded as the riverbank flotsam, but also moves in a similar desultory fashion from place to place, event to event, at the behest of forces outside of himself. He is almost a cypher, a ghost, and the killing at story’s end completes the cycle of destruction Brandt hints at through the river’s casually acknowledged violence. It is a pattern repeated throughout the book, particularly in the flash fiction pieces of a few condensed pages.

‘A Contemplation of Rain and Ducks’, for instance, hides a deep study of grief inside a slice of surrealism, pitting Geraldine, a woman drinking wine from a thermos in a park while mulling over terrible circumstances, against Harold, a bilingual duck acting as a sort of external conscience:

While superficially amusing, charming even, the alternating duck discourse and interior self-examination grows darker and darker, as Geraldine broods in the rain on a bereavement and an almost-bereavement of a job coming to an end. By the close it isn’t clear if the process has worked – she will perhaps spark up, and back into life – or is instead a portrait of complete mental collapse. Brandt is careful to allow multiple readings, and to suggest that life is never so simple.

Some of the longer, sustained pieces of fiction are equally good, turning a dextrous scalpel on society’s ills while never condemning the patients. In ‘Heading West’ we encounter Leo, an elderly – but spry – man inexplicably walking to the seaside along the side of a motorway at three in the morning. He is (perhaps intentionally) an opposite to Alf – clearly dinged-up, even derailed by experience, he seeks in each moment of forward motion the impulse to joy, honour and excitement, rather than detachment or nihilism:

In travelling towards the sea, albeit in his own idiosyncratic way (and assisted eventually by Alex, a young person of indeterminate gender who offers him a lift in a rickety hoarder’s car), Leo is attempting to seize the momentum from another difficult past, and to reunite himself in spirit with his lost love, Matilda, or perhaps more widely, with life. He is trying to escape being “a fellow ghost in a half-world”, as ‘Letters from Prague’ has it – someone, as in that story, emerging as their true self from a life of slowly-dissolving lies, or in this, a person who refuses to bow down to the crushing apparatus of time and loss.

These themes coalesce, and reach their height, in the most startling story within the collection, ‘Stop all the clocks’, a companion piece to the flashback childhood sections of The Imitation Game which explores a young Alan Turing’s keen sense of loss, and dislocation, on returning to the public school where his best friend Christopher is newly-absent after death. The story is both expansive and concentrated, as if to underscore both the intensity of thought which clearly marked off Turing from his contemporaries, and also to allow for moments of perfect characterisation a brisker narrative might have overlooked.

Before we are introduced to Alan’s intense, almost brooding need to comprehend the fate of his friend and his intelligence – a relationship mirrored by that of the narrator, a rather waspish master awaiting his own friend coming to the staff room, who does not come – we see Turing’s own unsparing, clean intelligence at work:

This slight exchange is telling. When Turing later comments on his near-obsessive concern with his friend’s whereabouts in the universe – “what has become of his mind? … I feel sure we will meet again somewhere and I will need to account to him” – the master is unable to comprehend what is being said, despite his evident forbidden love for a colleague, and takes the coward’s way out, dismissing Turing as adolescent or worse:

Anything out of the ordinary, then, either too large and complex or too small and intimate for society’s limited, allowable range, is to be despised, sniggered at, and ultimately squashed. It is an extraordinary story, both vast in scale and small in canvas, much like Turing’s own life, and underscores the achievement of the volume as a whole. It occupies just over a hundred pages, with some works short as half a page, but No One Has Any Intention of Building a Wall punches well above its weight, and is a glorious poke in the eye for bigots, gatekeepers and small minded Little Englanders everywhere.