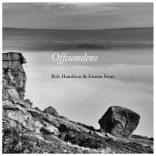 This is an outstanding collection arising from a collaboration between photographer Bob Hamilton and poet Emma Storr. I am not surprised it has been shortlisted for a Saboteur Award 2022 for best collaborative work (final result still awaited). What particularly struck me was the way in which the poet often shapes the form of her poems in response to the photographs, although sometimes it is the poems which inspire photographs. Sometimes they are just picked to mirror each other.

‘Mirror’, a skilful concrete poem, was inspired by a photograph of trees reflected in water, one of my favourites among the photographs by Hamilton. The poem has text in the shape of an upside-down pyramid meeting text in an upward pyramid. The words ‘water’ and ‘white’ meet each other at the midpoint, very apt for water meeting the light in the black and white photograph. The first and last lines are repetitions but in inverted order. The first ‘stanza’ dives down, whereas the second is more expansive in tone:

‘The Leeds Library’, a sonnet, faces a photograph of book stacks in this library. The sonnet, of course, has particular literary overtones as a form and is book-shaped. The poet writes in the rather lonely voice of the book:

‘Wall’ is another example of a sonnet. This form implies the solidity of the wall although it has its tensions:

I enjoyed the mention of ‘Crackpot Hall’ in this poem, such an evocative name (and a real place according to the notes). The collection is very much a celebration of Yorkshire and place names provide a tether to its history. The poem, ‘The Naming of Stones’, is a good example of this with Ilkley Moor’s ‘the Twelve Apostles, the Cow and Calf’, / the Lanshaw Lad’ and ‘Badger, Neb / and Pepperpot’ stones. Hamilton and Storr visited Yorkshire Sculpture Park together in September 2020. This resulted in the photograph and a series of haiku, ‘Upright Motives’, where Storr describes Mick Johnson as he ‘tickles out dirt’ when cleaning Henry Moore’s ‘Upright Motives’:

The simplicity of the haiku form also works very well in the poem ‘Worship’. Here, with three haiku, Storr conjures a moment of reflection in a serene and peaceful atmosphere, next to the photograph of a ruined stone barn:

On the other hand, the photograph which inspired ‘Your Kissing Gate’ has a brooding sense of absence. In this poem, ‘Curved arms hold / damp air’ and the gate waits to

Another striking photograph features cumulonimbus clouds over the landscape. A collaborative decision was made to place the poem ‘Nephology’ alongside this. The poet makes full use of the page to add air into the poem; text runs across the page but also hangs in a central section

Some of the poems have a welcome humorous touch. In ‘Resignation’, written in the voice of Santa, the reader is treated to Storr’s response to Hamilton’s photograph of a Santa Claus figure walking with his dogs, pulling a shopping trolley down a high street. The poet highlights the incongruity of the scene: ‘They’ve sent these scruffy mutts, not Rudolph and his mates’. The poem ends ‘Goodbye to Ho Ho Ho, the smelly kids, I’ve had enough.’ ‘Dog Days’, in the voice of the dog, is an affectionate portrayal of owner, ‘Mabel’, and dog:

In ‘Swinner Gill’ the poet creates compound words ‘grassgroove’, ‘rainrunnelled’ and ‘slipdripping’ which add to the impact of the pantoum’s repeated lines. The poet explains in the notes that ‘the repetition emphasised the fear’ she felt walking in a steep valley with the ‘more sure-footed’ Hamilton. She also uses this technique in the light and airy poem ‘Hawthorn’. In the photograph, a solitary hawthorn tree clings to a rocky slope. Compound words featured are ‘footrooted’, ‘windblast’, ‘barkknot’, ‘budburst’, ‘songstretched’ and ‘thornsharp’. They add to the musicality of the poem already established through the use of end rhyme throughout the poem:

‘Engagement’, was written as a response to a poetry prompt about forming a relationship with an inanimate object. The accompanying photograph is very evocative of the cotton mills of Yorkshire’s industrial past. In the poem, Storr captures the to and fro of a loom with indented lines:

She uses indentation again, along with rhyme, in ‘What I Want’ to create a sense of the galloping horse ‘dappled in dove-white and grey’ captured in the photograph. The rhythm reminded me of Robert Louis Stevenson’s poem ‘Windy Nights’ in ‘A Child’s Garden of Verses’:

The Yorkshire term ‘offcumden’ is explained as ‘someone who was not born in that county’ –both Hamilton and Storr were born in London but moved north. Throughout the book, the photographs and poems work seamlessly together leaving the reader with a deep impression of the county. Clearly, Hamilton and Storr are attuned to each other’s perceptions and engagement with their adopted landscape, whether rural or urban. The collection has a very useful set of notes at the back which flesh out the context for the pairings of image and poem and also explain the creative approach taken.

Beautifully produced and printed, this is a collection to treasure. I know I will return to it again and again and use it as inspiration for my own collaborative efforts.

As You Like It. Review by Barbara Lewis. NO ONE HAS ANY INTENTION OF BUILDING A WALL