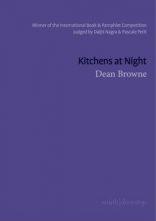 At first sight the title looks straightforward, suggesting some cosy comfort and domesticity. It nudged me towards a sense of ordered calm, evoking that winding-down feel at the end of the day in a familiar setting, with some warmth and the doors closed on the outside world. However, the poems don’t bear this out. The title isn’t nearly as transparent as it appears. Instead, it leads me to consider how a title plays with the reader, teasing out a response based on our own lives—or kitchens. The more I think about this title, just the three words, the more questions emerge. Are these kitchens seen from outside, perhaps through lighted windows—with a connotation of separation and distance—or from the inside, with a different level of closeness? What time of night? Are they inhabited or empty? And why do I assume they are domestic rather than institutional?

Some poets like to lift the title from one of the poems for the whole collection. Alternatively they might lift a key phrase from one of the poems to encapsulate the general subject area. Dean Browne has done neither of these, although towards the end of the collection the poems do refer to cooking, making supper at home, and there’s even the phrase ‘kitchen at night’ (in ‘Listening to Joni Mitchell’s Blue While Cooking Peposo’). But that’s singular, not the plural of the title. This is a collection where even the title is elusive.

When you’ve read these poems the necessary solidity conveyed by the title becomes apparent. There’s a level of surrealism in the collection that needs the contrast with the reality of everyday material and routine. This can be a difficult balance and, for me, Browne generally gets it right across these twenty-one poems. The pamphlet won The Poetry Business International Book and Pamphlet Competition, judged by Daljit Nagra and Pascale Petit, and it’s easy to see why. There isn’t a weak poem and the subtle links between them reveal a poet who knows exactly how to make the total effect greater than the individual poems.

Memory is a key theme, made visible in ‘Aide-memoire’, the opening poem.

There follows a journey through the city (‘Leaves are smeared on the street, a salad of dragged newspaper.) while no one notices the goat. The nagging question is ‘What am I meant to remember?’ It’s the real details of experience that the poet clings to:

The goat, previously a slightly surreal element, has become subsumed into the mix of memory and reality—but nothing is stable in this poem. In the final two lines—

This works—but how? Perhaps because the scenario has been so carefully crafted, and because the goat is now entirely at home within it, there’s an opportunity for a final spin into another dimension. That version of living is, in the following poem, (‘Curriculum Vitae’) through a job ‘demonstrating the excellence of this potato peeler/ to an audience who could well be allergic to spuds.’ It’s a precisely focussed image of futility, a state that Browne develops in the sonnet’s octet before a dream of reality takes over in the sestet—

This time the vision of perfection is compared to one sold by an advertiser and, though we know it’s just as unlikely as the excellence of that potato peeler, the yearning for freedom and that glorious soaring feeling is all too recognisable—as is the deflationary bathos. In ‘Pine Box in the Flea Market’ the box itself—‘The japanned pine box/ with its cold brass handle and clasp’—remains on the stall but opens up its possible contents to the imagination, (‘Maybe a bunch of shrunken heads;/ a rosary of goats’ teeth …’). This is an invented future, a type of memory in reverse.

This future that Browne imagines for the box is visible and physical; he makes tangible what happens only in his mind, ’your shoulder killing you all the way home’. Nothing happens—and yet everything does.

Wardrobes, wire hangers, door knobs, buttons: just some of the props surrounding the people who inhabit these poems. ‘Rachael’s Coat Inside Out’ is marked ‘i.m.’ with no further explanation; it’s part dream, part fantasy about her winter coat, hanging now in the forest, the ‘shifty material lining’, the ‘slit left by a torn-away button’. Rachael, with her ‘nothing shoulders’ is a wraith, while what’s left of her coat, with its worn stitching, is still very much in this world. This poem is haunting in the proper sense; out of material details Browne has created a precise image of a ghostly memory.

‘Pinball — for Matthew Sweeney’ is another poem concentrating on someone close. The late Matthew Sweeney—he died in 2018— appears in the list of friends in the Acknowledgements and this poem shows how much Browne has absorbed of Sweeney’s clarity and ability to stick to an image, however unlikely it might appear initially. Here, he has Sweeney slipping off his oxygen mask and dismissing the idea of a headstone—‘no wings, no spidery gothic script’—in favour of a pinball machine. Browne reaches into the future to see what this would look like—

Like Sweeney, Browne is sparing with adjectives letting the solid nouns fix the scene in the reader’s eye. The stone angels are real so why shouldn’t they have an interest in the mounting scores? Of course the coins will be cold, at night, in a graveyard, and from a dead man’s hand.

In the same way Browne uses ingredients to give emotional substance to the domestic life he sketches in ‘Approach to Chilli’. An apparently loose opening stanza, one third of the poem, explores seemingly idle questions: about filtering the garden light through a colander, about the ‘essence’ of the kitchen table if he cuts it up— ‘… at what point exactly would it cease// to be a table?’

In the move from philosophical speculation to bringing the ingredients together he changes the emotional colour: ‘kills’, ‘vicious’, ‘spitting’, ‘tantrum’. This isn’t a cosy kitchen but one where the heat is too intense, the food too angry. A kitchen at night, when the day has been simmering, can be like this. In the final third of the pamphlet there’s a sense of a broken relationship in the margins of the poems, and sometimes in focus. The majority of Browne’s poems are in the first person, or in that self-reflective ‘you’ that lets a little distance in to what might be memory. To read these poems as any sort of life-story would, I suspect, be a mistake but there is pain and loss within them, mixed with fragments of the material reality of ordinary things, especially in ‘Fado with Garlic Crusher’.

It’s ‘association’ that Browne works with, links that are both real and surreal, but which never feel un-real. Writing of this order requires the confidence that comes from long apprenticeship, one which gives the poet the ability to build up associations that do not exclude the reader but which create a shared imaginative space. Daljit Nagra calls the poems ‘quirky’ Pascale Petit describes them as ‘packed with exuberant images’. Whatever you call it, Kitchens at Night crackles with energy.