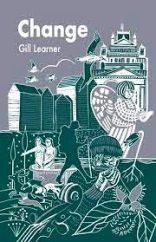 Gill Learner’s third collection, Change, is a joyful and indomitable work from a poet who only started to write after her retirement in 1999. The poems are assured, full of energy, well-crafted and unfussy. They grip the reader immediately. They repay re-reading and reflection for their depth and subtlety.

This collection reflects Learner’s great passions: her life with her partner Trevor; the interaction of family and intimate life with History; making art; the horrors of war and injustice; the interdependence between humanity and the natural world; travel; the centrality of subjective experience and music. Learner has structured her collection in seven sections, like chapters or movements, each framed with an epigraph. She is never far away from sound and music, combined for instance in “Soundtrack: 1795-1821”, a re-imagining of the life of John Keats, and she has included three fine poems on Beethoven. She is particularly skilled at beginning a poem and the imagery and rhythm in the opening line are often the source from which everything else flow – as in “Night Visitor” which begins: ‘We woke to the mellow flutes of golden orioles’.

She is daring, sometimes allowing a poem to flirt with disaster in the near breakdown of a line before restoring momentum. Her ear and eye are alike discerning, as she shows in her nature poems –especially when writing about birds – with the musicality of her lines and the fine judgement of line endings. She works verbs hard, as they should be worked. She shows rare skill in managing irony and modulating from one emotional level of intensity to another with dramatic effect. If Poetry is ‘making it new’ then Gill Learner’s Change is a book about making art and building a world which might last, and about how to do this by listening to awkward voices that can often be blanked out, but that need to be heard. Her supremely well-chosen opening poem, “Great-grandad’s journey”, reflects on a legendary pilgrimage to the cathedral of St John of Compostela and on the results of this journey, a trial undertaken in response to a calling, like the calling of a muse:

This poem is about carrying through a mission, starting with a mystery, and moving to its resolution. There is compulsion, guilt: effort must not to be spared:

Can it be a coincidence that the pilgrimage setting, with its endless hot roads, extreme weather, and ever-present mud, is reminiscent of the trenches and battlefields of the First World War, never far away from the preoccupations of this collection? What is the purpose of Great-grandad’s journey? Learner hints at an answer, which lies in his commitment to a challenge which brings unexpected rewards

Note the resonant imagery in ‘shell-marked way’, yoking together different worlds of extremity experienced in both religious asceticism and making war. This is a poetry of solitude, set in the middle of a teeming world which is full of bustling, sometimes violent activity, where everyone is going about her or his business. Such activity comes at the cost, Learner suggests, of not listening to the call to life in the moment, to the enjoyment of simple things, of solace. The poem concludes with Great-grandad’s return:

Endurance is a powerful theme in this collection, which is dedicated to the memory of Learner’s life-long partner, Trevor, who died in 2018. His death and the desolation of his loss are the subject of a memorable poem: “How it was”.

So simple in appearance, laconic, made from ten couplets riffing on hexameters, a metre strongly associated with elegy, the poem disguises itself as an inconsequential record of a sleepless night and early morning rising:

The couplets are skilfully used to build a picture of the little intimacies of a shared life, memories of a recent holiday in Cornwall, the enjoyment of an episode of Poldark, the first coffee brew of the day, the first and second perusals of the morning papers, the listening out for the other’s first stirring, the preparation of morning tea to accompany waking up, and then, the final discovery:

You feel the power of her ending on this shortened line.

Learner writes wonderfully about grief: “Strange beast”, “Caught Out”, “Ephemeral”, “Beech”, “Aerophobic”, “When the music stops”, and “Resurrection” all explore this complex emotion. What she absolutely gets right, is the bitter-sweet ambiguity of our relationship with grief: how we cling to it as a remnant of the person death has taken, whilst resenting its intrusions, its power to hurt. In “Strange beast”, she observes grief’s arrival and its colonising technique:

In her wide-ranging, multi-faceted, collection, Learner paints the albatross, the lapwing, swallows, and the slug (in a compelling shape poem), turns the tables on abusers of power (“Double exposure”, “Jersey 1941”), bears witness to injustice (“Bitter harvest”) or the long reach of PTSD (“Hastings leave “ and “Ex”) or double standards (“Heritage”, “The watchers”). She unpicks the making of works of art, is fascinated by artists, celebrates her heroes, named and un-named, and friends no longer with her, but continues her way, unconquered: