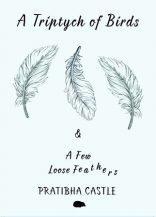 A sense of wonder and a deep connection with nature are among the inspirations for Pratibha Castle’s poems in this debut collection. Her lyrical voice is strong and confident and it also consistently focuses on her Irish-Catholic heritage through childhood and girlhood until the rebellious 1960s. Keen observation and detailed descriptions of birds are expressed in fresh imageries and compelling sounds, conveying the poet’s feelings and symbolising her journey through life:

Birds are also connected with the story of Castle’s family; her parents split up when she was a child and this left her to deal with the absence of her father. Her mother ‘snatched’ her from her father’s embrace and the child laments that he let her do this. The loss is painful and pervading and is expressed in her father’s tears, which are hidden behind his glasses. She wonders how this could have happened, exploring the implications of the traumatic experience. Figures of birds are recurring images which map her journey towards the awareness of her past and present situations. Birds become metaphors for important moments in her life: a sparrow arranging its family nest reminds her of her father; and the memory of ‘the swans gliding gracious/above the tarry Blackwater’ adds an emotional touch to relationship difficulties as she cares for her mother in later life.

The conflict with her ‘mother’s tough love’ becomes clear during her girlhood and is compounded by difficult years spent in a Catholic boarding school. In “Plums” the ‘chalk-cheeked/clique of nuns,/bully girls/in chilly dorms,/priest pontificating/from the pulpit’. This leaves her empty and lonely and suffocates her desire to know, experience and expand. Rebellion follows in her search for love in a world that is changing:

Thinking she deserves love after the delusional relationships of her childhood and girlhood creates a need that makes her vulnerable and human. The conclusion is unsettling: ‘My heart/tenderised with grief discovering/the night my mother died,/love is an ether you can choke or float in.’ The image is unfulfilling though open to further understanding and to hope.

A provisional end of the journey develops in the last poems, such as “Afterwards” and “Dawn Walk”, in which a reconciliation with her past – and above all with her relationship with her mother – occurs during her mother’s illness and after her death. Regret and hate dissolve at her funeral; the protagonist faces death, which is an end that might be the beginning of a new relationship. She opens to love mediated by nature; her garden is a refuge but also a haven where she can recover from grief and let the wonders of nature settle her troubled self:

The best of Castle’s poetry is in these fresh crisp lines with their striking images and mesmerising sounds. She evokes an intimate dimension that blends with the environment and from which the self emerges renewed. Her work is a constant and humble excavation of her past; family relationships and her Anglo-Irish background are important starting points, but Castle goes further, shaping her identity from scratch. The contact with nature is crucial and helps her in her journey towards love and a more confident self. Her condition is still uncertain at the end, but it is more hopeful and open to further developments.