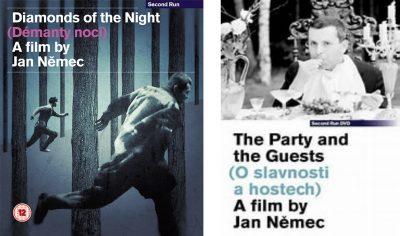 Is Diamonds of The Night a holocaust story or not?  Or a generalised depiction of survival that only backgrounds the holocaust to subtly shift the film into a more ahistorical perspective?  It’s of course set in a recognisable time and place: Czechoslovakia, WWW2, a German train, containing remarkably few prisoners, with two teenage boys escaping from transportation.  Yet Diamonds of the Night is full of menacing imagery so as to create a surreal dream journey: here the boys struggle, in a feverishly sensual state, through forest, town and village.  Atmosphere and physical endurance matters more than given real facts or back-story.  We are never even told the names of the boys in a purely visual film lasting 68 minutes with only twenty lines of dialogue.  (This is a mysterious film that although listed in the index of Annete Insdorf’s “Indelible Shadows, Film and the Holocaust” is not examined in her seminal book.)

Their trek through the forest brings them to the house of a peasant woman from whom they are given (?) or steal food after maybe physically attacking her – Nemec’s dislocating editing, owing much to Alain Resnais, has you doubting.  The boys are captured by an elderly group of hunters (probably Sudeten Germans).  A trial followed by their killing will happen.  It doesn’t.  The boys are set free and return to the darkness of the forest.  So much is pared down in this adaptation of the novel by Arnost Lustig.  The essentials of their flight matter most.  Diamonds of the Night is magnificently photographed.  Nemec’s camera conveys a palpable sense of texture.  It pursues the boys through woodland, muddied earth, streams and menacing buildings to give their plight an intense urgency.  Very strikingly so in close-ups of faces part covered by crawling ants.  A Bunuel reference (Un Chien Andalou) whose symbolism ambiguously suggests they might be already dead or the German occupation has even pervaded the natural environment.

The greatness of Diamonds of the Night (After several viewings I regard it as a poetic masterpiece and one of the best films of the 1960’s) resides in the density of its imagery and direction which hints at a great deal of dramatic subtext.  The visceral effects of war, a never ending bad dream, from which you will not wake, as experienced by the boys, the peasant woman and the hunters is unforgettable.

Take the hunter scenes.  They possess a raw, ugly horror.  Partly decrepit old men dance, sing, drink beer and devour portions of meat in front of the tied up boys in the village hall.  These are predators of the young; a bunch of repellent, ancient villagers making up a home guard that’s both ludicrous and sickening.  They’re like the monsters from Goya’s The Disasters of War, emerging from the psyche: intent on grotesque conduct, humiliation and torture.  “I was not interested in psychology in the true sense of the term, in a faithful depiction of man’s mental processes, but in an examination of the subconscious.  That is what appeals to me in films – the possibility of discovering man’s subconsciousness and dreams.” (Jan Nemec)

With Nemec’s The Party and the Guests we are in different territory.  Both films can be roughly interpreted as an allegory or parable and share an exact sense of the absurd.  Yet in style they are dissimilar.  Both are shot in monochrome.  The black and white of Diamonds is raw and immersive.  Whilst Party’s is cool and sinister.  Diamonds isn’t an amusing film.  Party is darkly satirical.

A group of friends are having a picnic in the country.  On going for a walk they encounter a group of officious looking men who take them to a small clearing.  The leader of the group is a sinister man named Rudolph.  He invites them to a party, in the open, near a large house.  He will set the “rules of the game” as they eat their meal with other detained guests.

There was once a phrase to describe communist rule in Eastern Europe.  It was “a velvet fist in an iron glove” and this feels appropriate for The Party and the Guests.  On the surface things, appear congenial until you attempt to question and perceive the threat below the surface.  One of the guests, played by real life film director Evald Schorm, refuses the invitation and escapes. When asked why he won’t go he says that he doesn’t believe that these people are capable of love.  At the end of the film we hear the barking of search dogs.

This is very much a film about conformity, control and the absurdity of human behaviour.  Nemec has always denied it was a political satire (though it was officially “banned forever”).  I think that’s being ingenuous as it so obviously feels like a thinly disguised critique of the communist authorities.  In this respect its message, though powerful, appears obvious, even simplistic – totalitarian states create a group mind which is hard to renounce.

The guests suffer minor humiliations.  But no one is tortured or murdered in The Party and the Guests only horribly encouraged to eat, drink and become part of a manipulated bourgeois community.  However I found the film to be more successful depicting absurd reasoning than political control.  When it evokes Bunuel, Beckett and Ionesco the full madness of group conformity is revealed. Then it’s really sinister but unfortunately not as bitingly funny as I was expecting.  I think this is partly to do with the performances.  No professional actors but members of the1966 artistic establishment.

It’s the guests’ body language, the film’s acute framing, sharp composition and photography that lingers more strongly in the mind.  This is a consistently teasing, audacious and oddly cruel trapping where everyone must stick with the party or else!

Both of these Nemec films have been beautifully restored on Second Run.  They are essential viewing for an understanding of how brave and uncompromising 60’s Czech cinema dared to be.