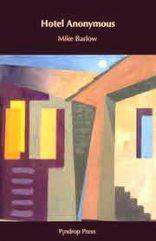 Mike Barlow, who runs Wayleave Press, is himself a prizewinning poet and Hotel Anonymous is his fourth full collection, the first since Charmed Lives (2012). His poetry is concerned with questions of identity, with what is real and imagined, and the way in which our inner lives shape our perception of the world.

The book opens with a poem about a seaside resort, ‘A watering hole, all front and seasonal smiles’, punning on the idea of a welcome put on for visitors, who in turn bring their own illusions:

In “The pause”, people don’t just imagine their own lives, but others’ as well: ‘the stranger on the train … / glancing up to take in the cipher of your face / and for a second attribute to you a life / not like theirs but a version of it all the same.’ This can be disorienting, but even what we think we are sure of may not be true and we depend on others for our sense of self

Living among strangers can, on the other hand, be liberating. In the collection’s title poem, hearing someone practise the oboe in a next-door hotel room evokes teenage memories of listening to Tchaikovsky in an attic room, ‘while in my head the oboe / made me want the world to stop / so I could sit there forever.’ But the music moved on, just as the neighbouring oboist stops playing and goes out into

Stopping time or stopping in a strange place are both ways of standing outside the world.

For Barlow, like MacNeice, the world is crazier than we think. There are poems about a juggling priest (“Father Floris”), a shambolic man with the precision demanded of a clockmaker (‘… At the workbench the man himself, // glasses on his forehead, hunched and peering through / an eyeglass at a galaxy of cogs and springs’) and an elusive odd-job man who is all over the place, but keeps the tools of his trade immaculately ordered in the back of his van (“Sourdough”). It’s not quite as simple as telling us not to be fooled by appearances. Barlow sees duality as an inevitable part of existence. ‘Whichever life we live, it’s the other calls’ he says in “The painter in the barn”. (As well as being a poet, Barlow is also a visual artist, one of his own paintings being reproduced on the book cover.)

There is often a surreal quality to his work, juxtaposing the real with dreamed or imagined worlds. But this isn’t a hazy, liminal state between waking and sleeping. Like much surrealist art, the images are pin-sharp—surreal with the emphasis on the real.

“Somnambulists”, the title poem of the first section, has the poet calling on an old flame late at night, remembering, ‘you’ll be out yourself by now, abroad / in the city of sleep, also looking for a door / to knock on, so we’d miss each other / again’. He’d ‘like to think things / might have changed, that we could sit together / round your kitchen table’, but admits nothing would really have changed: ‘you’d want me to stay and I’d respond / by talking about something else. Still not sure / I was ready for this …’ The poem has the illogicality of a dream. He can’t actually have sleepwalked to the house, as the poem starts with him ‘Taking the long way home’. On the other hand, the poem can’t be remembered as a dream either, since it ends: ‘in my own bed I’d wake up with an uneasy sense / of what I might have slept through.’ The whole thing is an illusion woven around the central illusion that his lack of commitment might have changed. He’s acting out of habit and old habits die hard.

In “On the run”, ‘Driving down a small suburban street / somewhere in the heart, I begin, as I often do, / to imagine a different life’. Stopping his car outside a suburban semi, he swaps places with the ‘man my age but older’ who opens the door and takes his car keys. The man’s wife, appearing from the back, seems not to notice. But in “The Lost Name” he is less willing to change his identity:

Offered the prospect of release from his life (‘… a gate // I knew was always chained and locked, / only to feel it open like a siren’s breath, / the way beyond, a beckoning blank’), he funks it (‘Better to stir awake my sleeping drunk / for all his partial recall of events.’)

One shouldn’t look for consistency here: vacillation is very much the point. Nor should we be too serious. An essential feature of Barlow’s poems is the fun he has in playing with the surreal scenarios he creates, as with “Flash mob”, in which during ‘a normal day in the town centre’:

When order is restored, he hears ‘way off / in the mind’s fog the booming of a world / still at odds with its own promise.’ There are similar flights of fancy in “The origamist”, a poem that reminded me of Ian McEwan’s short story, “Solid geometry”, except that in this case the woman is ‘wanting perhaps / to become invisible’. She ‘draws back curtains to reveal / the day’s blank page, reaches up // to each top corner of the window, pulls away / the sheet of possibilities’ and goes to work ‘throughout the day, pleats and crinkles multiplying, / the sheet shrinking accordingly until handkerchief-sized, // beginning to fray and tear where too many lines cross’. Play is literal in the Lego poem: “Building a church with Maddy and Lewis”.

There are poems towards the end of the first section that apparently draw on Barlow’s experience as a probation officer and others that deal with old age and death. The second section, which takes its title from a poem about a funeral, “Before the song”, contains some comparatively straightforward poems about people and objects from the past (a grandmother clock, an Iron Cross his father took as a war trophy, an ex-comrade who worked for his father after the war, real uncles and a courtesy uncle, an ex-POW, who taught him to cheat at cards). But even among the reminiscences there is trickiness:

The same poem speaks of ‘false memory waiting in ambush’ and includes a doppelganger. (“Tales from the town maze”, in the first section, was about the discovery of an abandoned baby leaving a park-keeper with a compulsion he can’t find his way out of to search the maze after dark.)

Also in the second section is “Someone Else”, a reworking of a poem from Barlow’s 2007 collection, Another Place, extending it from three to six stanzas. It’s about a moment of panic on a rock climb (‘So scared I couldn’t spit I swear / I’ll take up golf or Scrabble, / long for office politics, / a lukewarm pint in a smoky bar’) and describes the dissociation that happens to people in extreme circumstances: ‘Someone else, not me, draws a deep breath, / swings past a bulge of rock to seize / a pinch grip on the edge of all that air.’ But whereas the first version left him dangling, the revision sees him safely to the top. Although the original works perfectly well, I liked the added drama of the revised poem with its punchy descriptions and the self-mockery of:

The final section, “Worlds”, focuses on rural Lancashire, where Barlow, a Londoner by birth, has settled. The title poem carries an epigraph from Derek Mahon and the poems have the same close eye for detail of so many Northern Irish poets, although Barlow typically introduces problems of subjectivity and unreliable memory: ‘But how are we to know the difference, / each with our own world / through which to see the world?’.

Barlow does not withdraw into a rural retreat: he belongs firmly in the modern world. “The Delft school” connects the munitions explosion in Delft that killed the artist, Fabritius, and destroyed much of his work with the 9/11 attacks by way of visits to the National Gallery, then a nearby pub, where the news is on the television. (Donna Tartt creates a similar link in “The Goldfinch”—painted by Fabritius—by beginning her novel with a fictional explosion in the Metropolitan Museum of Art in New York.) “From a little book of passwords” deals with the nightmares we all face with our computer security and “The surreptitious life” references a computer and mobile phone, although admittedly in a poem imagining doing without such things, as well as bank account.

I very much enjoyed this book. Hotel Anonymous contains poems that not only entertain, but also jolt you out of lazy assumptions about the everyday without getting lost in a fog of incomprehension. Reading them, you share some of the pleasure that Mike Barlow must have had in writing them.