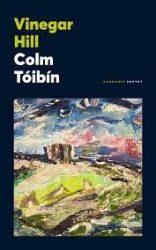 Tóibín is responsible for some of the clearest prose we’ve seen in a while. I have to begin by declaring myself a fan of the novels – having read one I read them all, and so I should be pleased to see this volume of poems spanning many years and looking like a small ‘Collected’. But sometimes ‘completism’ can have a downside. There’s plenty of gold in Vinegar Hill, but there might be a case for saying base metals can hamper a search. I also wondered if some of the long narrative poems using one or two-beat lines would lose anything if they came in longer lines.

That said, what ‘a good read’ this turns out to be. Tóibín’s erudition means we occasionally need to lean on google but otherwise we can go cover-to-cover without a glitch, as in a good novel. The second poem (‘In Los Angeles’) is among the best, an apocalyptic piece:

He goes on to glance in the direction of Auden on suffering, and ends with Icarus crawling injured on the highway: ‘Even the dear old hymns would not // give light its shade, shade its dark.’ It looks stronger than the opening poem that precedes it, and that’s my second point: ‘Prayer to St. Agnes’ will later eschew metaphor in favour of saying ‘exactly what I mean’, yet the poems using metaphor are surely his best. Some others are either short or short of gas, of the lift needed for take-off. Even so, ‘Curves’ is an exception, achieving a great deal in a small space:

Both these poems coming near the start have in common a heft that is not merely in plain sight but buried in their way of saying. Even 39 small stanzas of ‘Mysterium Lunae’ are unexpectedly funny (as Stoppard’s ‘Jumpers’ was in satirizing the end of romance), but in this case about the moon’s actually vanishing: ‘It was all the rage, once / the Moon… a lovely / old saying // long eclipsed’. Apocalyptic scenarios are not yet fully with us., so this is Sci-Fi, except where the sinking of the Estonia is imagined after the event in seven eight-line stanzas using pentameters (‘The Long Trick’). There are powerful emotional moments: ‘December’; ‘Two plus One’; ‘Father and Son’ and a paean to great marginalised men in ‘Late’. In the first, a quiet contemplation of ‘what has remained unsaid’ opens with, ‘ I wondered that December day / what I would miss’ and proceeds to ‘personal’ universals without sentimentality. A difficult poem to write. It’s followed by a memory of parents: ‘I have their two weak hearts in one / weak heart’ – a tentative poem on physical vulnerability. ‘Father and Son’ relates a scene so unusual it has to be fact, focusing on a loss of speech, surely a metaphor whether or not it’s meant to be. In ‘Late’, the speaker looks back and down to list profoundly influential ‘greats’ who managed to keep their heads down and avoid the glare. It’s an enjoyable polemic with sting. Apparently, having only initials before your name marks you out:

There are many expertly handled narratives: ‘The Nun’ (a jape in which the mother dresses up and visits her family); Kennedy in Wexford (showing the innocence of children); Vatican II (on allowing nuns to drive); ‘Life’ (where GM Hopkins calls in to the studio of JB Yeats) and ‘Dublin: Saturday 23rd May 2015’, this last an odyssey in 62 unrhymed quatrains in which two gay friends search nostalgically for their pre-legal past. ‘In the White House’ tells of a novel way to let guests know that a party has ended and ‘November in America’ covers the unlikely tale of Trump’s victory. Perhaps the most surprising is ‘Eve’ which pushes the idea of a jealous God to its limit in presenting an unlikely threesome: ‘Nothing bothered Adam, but God…

The title poem partly focuses on the United Irishmen Rebellion (1798) and their escape through Needham’s Gap; also partly on the town reservoir and a landscape the poet’s mother tries to paint – but mainly on a place that ‘changes as the day does’ and where ‘there is no point in invoking / History. The hill is above all that…’ The ending shows clouds personified as an army that can ‘envisage no way out’. Packed with metaphors, then. Inconspicuously (p.125) ‘Prayer to St.Agnes’ looks to be an attempt to clarify or apologise for the method in most of what came before:

It’s a squib rather than a manifesto, not inviting us to quibble about metaphors that might say exactly what we mean, but the five verses include two attacking innocent daffodils:

In return for banning certain utterances the poet ends by praying for his reward, ‘so I can see what really is’. Sturdy blooms are used to taking care of themselves, but two out of five spent scything a topic so oft visited may be two too many, and I’d need convincing that Wordsworth wasn’t capable of seeing and showing what really is. The lower slopes are littered with the ruins of fell opposed points, even of the mighty, who dared cross swords thus – and we must beware of sounding like Tyson Fury trying to teach Federer to adjust his backhand. 130 pages of plain speaking, clear or clean verse will have charmed or taken their toll by now anyway, and they too would perhaps be better served by confidence and being allowed more room to stand up for themselves. But to return to my earlier claim, the book is in any case a delight, a ‘good read’.

John Forth was born in Bethnal Green and retired from teaching English after thirty-odd years in West London, the East Midlands and finally at Weston College. He has published several poetry collections and a ‘New & Selected’ (Rockingham Press, 2015). He has reviewed poetry for London Magazine and his twenty-first century reviews appear in London Grip. More recent books are available on request. forthsevern@btinternet.com