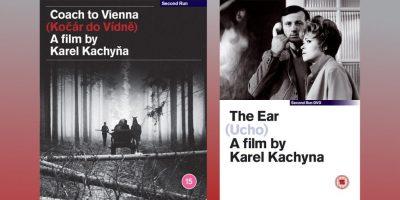 The creative partnership of director Karel Kachyna and screenwriter Jan Prochazka was one of the most remarkable to have been allowed to operate in communist Czech cinema of the 1960’s.  It certainly couldn’t have been easy for them to have projects authorised.  And then producing films that were either highly critical of the state apparatus; exposed the hard lives of a real working class; challenged collective farm ownership and religion or proved to be uncomfortably analytical about Czech citizen responses to the Second World War.  Prochazka did have some influence in political circles.  Without that Kachyna couldn’t have made such audacious even dangerous films.

Of their ten films I’ve only managed to see five.  Two from deleted DVDs (Long Live the Republic 1965 and The Nun’s Night 1967)).  Plus a taped TV broadcast of Christmas with Elizabeth 1969.  The other titles Coach to Vienna (1966) and The Ear (1970) having been re-mastered and released on Second Run are the subject of my article.

Coach to Vienna has been described as a road movie.  Yet it’s not easy going or graphically violent in the manner of most British or American road trips.  There’s no car.  No highway.  Just a cart and horse.  And a rough track through a dense forest.  Set in 1944 it has a simple and gripping story.

The husband of Krista (Iva Janzurova) is murdered (we never witness the killing) by the Nazis.  After she buries him two German soldiers (innocent of the crime) confiscate Krista’s horse and cart.  They order her to drive them through the forest to the frontier.  Krista hardly speaks.  For a long time all she utters is Brrhh Brrhh to slow or speed up the horses.  This command and her constant looking back at the wounded soldier Gunther (Ludek Munzar) invest her with dark intent and mystery.  For she’s waiting for the opportunity to kill Gunther and his younger companion Hans (Jaromir Hanzlik).  But she can’t do it.

This journey through the forest is superbly shot in black and white to give the film a dream-tinged quality.  Coach to Vienna has the extraordinary ability to step outside the programmatic war film and its conventions.  Its psychological depth creates a film of warring factors.

The conflicts of control and punishment are played out and are disturbingly intermingled in its characters.  No one is sure of the right action or correct response anymore.  Is the war really over?  They are lost in the fog of their behaviour more than any military fog of war.

Brilliantly directed, written and acted Coach to Vienna’s journey thwarts everyone’s ability to escape.  To employ the old cliché “the enemy is within” is appropriate for there are constant ironic viewpoints and sub-texts in the film.  Just to read the film’s title hints at cruelty.  A coach suggests imperial luxury not found in a humble horse and cart.  Whilst this basic transport is accompanied by the music of Jan Novak – a grand symphonic work for organ and orchestra whose jauntiness gradually feels mocking and bitter.

The power of the moral dilemmas in Coach to Vienna (an acute war film, tender folk legend and haunting allegory) is cutting and incisive.  It’s a bad dream of a ride not some grand tour through the woods to a welcoming village and the army of liberation.  This visually beautiful, moving and continually surprising work is hard to forget.

Equally memorable is The Ear a film bursting with concern for a failing marriage, state surveillance and party corruption.  What it shares with Coach to Vienna is the fact that when these films were first screened they were condemned for being anti-socialist and withdrawn for twenty years.  Jan Prochazka was carefully watched by the authorities and died from cancer at the age of forty-one.  Initially dismissed Karel Kachyna was later hired to direct much safer mainstream cinema.  The claustrophobic The Ear marks the end of their partnership and is a bomb thrown at the communist state.

Ludvik (Radoslav Brzobohaty) is a senior Prague official who is married to Anna (Jirina Bohdalova).  Their marriage is in a bad way, and they are very bitter.  Returning home after a political dinner party they discover their home has been broken into and the electrical power is off.  House keys go missing.  Phone lines go dead.  An innocent but worried Ludvik begins to destroy any possibly suspect papers.  A group of drunken party member friends arrive.  Have they come to socialise or spy on the couple? After they’ve left recording devices are discovered.  The government has placed Ludvik under surveillance.

There have been many fine films about surveillance (The Lives of Others, The Conversation) but The Ear might just be the most relentless of all for its deliberately narrow focus is informed by a high political intelligence about why and how such acts are carried out.  By skilfully cutting back to the function that Ludvig has attended Kachyna keeps his camera inquisitorial to combine states of suspicion, apprehension and paranoia feeding of one another.  His bad marriage brings further unease – it’s a drama where the support of a partner is not on offer.  True they cling to one another in fear but not out of genuine affection.  You never feel authentic escape or redemption is on offer: only the intense stress of being watched and how are you supposed to cope.

In 1963 Mike Nichols filmed Albee’s play Who’s Afraid of Virginia Woolf?  I wonder if Kachyna and Prochazka had seen that blistering film?  For the caustic verbal attacks that Ludvik and Anna launch feel close in tone to Martha and George’s living room fights.  Anna takes delight in shouting at any possible hidden microphones.  “I don’t like being recorded when I am enjoying myself.”  Her marital war with Ludvik needs to be private.  Yet the discordance of their partnership doesn’t interest the state.  Loyalty to party ideals matter more.  The tragedy of The Ear is that intimate and political allegiances have broken down.  One might have affected the other.  Either way trust and privacy are shattered.

The Ear is a marvellous if bleak film but never without compassion for its characters.  We sympathise with their plight and experience ninety five minutes of tension in the face of political voyeurism.  It’s all superbly acted, meticulously edited, lit and framed.  The execution and process are of a particular state and set of 1970 Czech politics.  Yet the human natures of the watched and watchers haven’t changed at all making the scorching The Ear live disturbingly on.