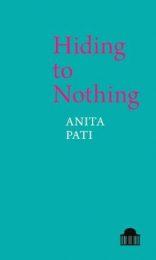 Poetry review – HIDING TO NOTHING: Emma Lee admires the boldness and sensitivity with which Anita Pati deals with difficult issues

Anita Pati explores the legacies of hostile environments, e.g. structural racism, and, in particular, their effect on women from the Asian diaspora, which can stop lives reaching their full potential. The central sequence ‘Bloodfruit’ is based on interviews with women who have struggled with infertility and the toll this takes not just physically but also on notions of motherhood. It starts with “Train Triolet (16.46 to Brighton)”, the last lines of which are,

The woman who mistook shopping for a bomb was making a racist judgment, but it wasn’t just its racism that was incorrect. The majority of suicide bombers have been male so the woman’s racism was overriding her common sense, which might have told her that bombers aren’t going to splash out on a designer label rucksack to put a bomb in either. (Anita Pati clarifies in the notes that she likes and uses Cath Kidston accessories). The point of the poem isn’t the white woman’s racism, but the fact it created a sense of defensiveness in the poem’s speaker: instead of a simple journey home, it’s become tense and put the speaker in a position where she feels she might have to justify being on a train with shopping. She can’t relax and exchange small talk with a fellow passenger, as the white woman could.

Even going to see a doctor is fraught, “The Good Doctor” ends

At the bottom of the page just above the page number, there appears in faded grey text ‘don’t deserve‘. It’s well-documented that medical staff tend to dismiss women’s pain and black women have an extra hurdle of racism. The power imbalance between doctor and patient is shown: he ‘nooses’ the blood pressure cuff (a loaded word in the context of race) and dismisses her complaints as hormonal. She is powerless to complain.

The section, “Bloodfruit”, a mix of prose and poetry, explores fertility in terms of the difficulty of becoming pregnant, baby loss and the sad fact that, for some, there’s no positive outcome and they are left with the grief of not being able to become a parent. It begins by exploring body hang-ups and how medical staff treat women they regard as overweight, ‘Obese they keep telling me but I pump iron like the best of them. The NHS makes me feel like some fat, disgusting whale that doesn’t deserve to have kids. I’m 26.’ Some women blame themselves, as can be seen in the sadness of a rape victim who believes she didn’t do enough to avoid being raped, ‘maybe because I let it happen it was my Fault/ and that was the reason behind the infertility’.

Another speaker observes how she enjoyed chatting to other pregnant women until… ‘And then there’s that moment –/ I’m scratched from the group./ Ghost-mum against the allies.’ The pregnant women who had babies feel that they can no longer include the mother who lost hers due to a combination of being too busy, not knowing what to say or feeling that talking about their own babies will be difficult. However, the ghosted mother (who is still a mother despite her baby not surviving), feels the isolation. There are support services, but you have to know where to find them which is not easy at a time when someone is grieving for a baby and the loss of friends.

One section repeats instructions for feeding a baby in a neo-natal unit in different fonts, representing different voices. It’s repetitive – these babies need feeding at least 8 times per day and night at around one and a half hour intervals. Some mothers are able to express breastmilk but have to buy a pump or scrabble round hospital wards to find one because staff don’t have time to keep track. One voice asks ‘why so many are women of colour here’ but it’s not answered.

There’s no clear distinction between the end of “Bloodfruit” and final five poems. In “Silver Jubilee” (dated as 1977), a girl draws a picture in crayons,

It’s shocking that thugs have targeted a girl, someone who won’t fight back. In shock, and not fully understanding the import of the thugs’ shouts, she’s focused on her picture. Not that telling her to go home makes sense when she’s already home. However, despite her youth, she’s already learning that home is not safe and the world outside it could explode with violence at any moment.

Hiding to Nothing is a hard-hitting, lyrical exploration of attitudes towards women, particularly black women, and how those attitudes shape lives. A lot of the individual poems focus on racism. The central section “Bloodfruit” explores motherhood, particularly when women struggle to conceive or have stillborn or premature babies and reflects how the sense of failure impacts on perceptions self-image and self-worth. Anita Pati writes with uncompromising sensitivity and an forensic eye.