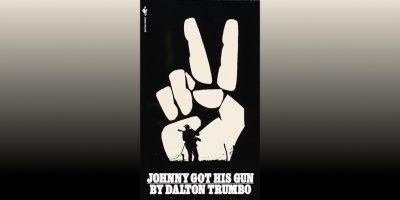 There’s no doubt that writer/director Dalton Trumbo sincerely wanted to convey the futility of WW1 as experienced by a young horribly injured soldier.  In theory he did.  In practise he misfires.

In 1938 Trumbo wrote the novel Johnny Got his Gun and after nurturing, for many years, the idea of an adaptation got to make his film in 1971.  Remarkably Trumbo interested Luis Bunuel to work with him on the script.  According to John Baxter’s biography of Bunuel it was a few months of Bunuel talking, Trumbo taking notes and a large consumption of alcohol.

The problem with Johnny Got His Gun is that Trumbo is too close to his subject matter and he’d no experience of directing.  This is an over-written and stagey film combining childhood memories, fantasy, combat action, hospitalisation, and a voice-over to explain soldier Joe’s plight which all proves to be weightily ambitious.

Joe, as played by Timothy Bottoms, is a quadruple amputee who’s also lost his eyes, ears, mouth and nose.  His mind is still functioning normally and Joe is able to comprehend the ghastly state he’s in.  Joe’s thoughts drift between his real life as a child and adult before enlistment, fantasies about his girlfriend, parents operating a carnival with their son on show and his serious conversations with Jesus.

The hospital staff remains indifferent to Joe’s plight, convinced he’s in a vegetative state, with the exception of a new nurse (Diane Varsi) allocated to care for him.  She attempts to communicate by using her fingers to spell out her name on Joe’s bare chest.  He understands and responds.  A temporary bond is formed (this ‘relationship’ becomes the sensitive core of Johnny Got his Gun and almost redeems a film of emotional over-kill).

Johnny Got His Gun begins well and ends well, movingly so.  Unfortunately, there’s too much flawed material in the middle.  The fantasy sequences are hard to take seriously.  We see Jesus (Donald Sutherland) working as a carpenter, signing off a delivery of wooden crosses and then addressing Joe (before his injuries) about what’s real or merely a dream inside the head of an amputee!

Equally risible are the moments when Joe pursues his lost girlfriend now mooning round the columns of a Greek temple or standing against a mountain of rubbish to supposedly represent human endeavour.  This has a pseudo-Jean Cocteau look.  Whilst the parents’ brash carnival scene is imitation Fellini.

Far better written and acted are Joe’s child and adolescent meetups with his father (Jason Robards).  Here lies a warmth and tenderness.  And I loved the bedroom scene between Joe and his girlfriend Kareen (Kathy Fields) as it honestly captures the couple’s coy then confident first sexual engagement.

Over the years Johnny Got His Gun has become something of a cult film.  It has its solid admirers and solid detractors.  I hover on being a detractor but not quite given its sincerity of intent now matter how misjudged that turned out to be.  Performances are generally good.

I like the contrast that Trumbo made between the black and white photographed hospital setting and the colour footage of Joe’s previous life.  Jerry Fielding’s militant music score is expertly arranged.

As anti-war films go, this is a very anti and frequently powerful.  I just wish it had been far less talky and better directed.  Perhaps Bunuel ought to have sobered up and accepted Dalton Trumbo’s invitation to direct.  Now what a film that might have been!