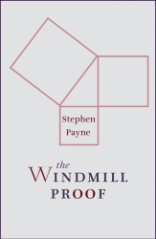 Poetry Review – THE WINDMILL PROOF: Adele Ward enjoys the beauty of mathematics in this polished collection by Stephen Payne

As a perfectionist myself I get a particular thrill from the perfectionism of others, and this was certainly the case with Stephen Payne’s collection. Each poem shows a poet who knows what he is setting out to achieve and he hits the mark every time. If a few poems stand out in a collection I feel satisfied and can enjoy the less successful ones, but in cases like this where it would be hard to pick out the best from such a strong bunch the enjoyment is greater. It is a book I will pick up many times to re-visit the poems as each re-reading would surprise again.

Some of the poems tempt the reader to go through them many times because of the wordplay and games, including various types of mathematics. If this all sounds a little too scientific, then the surprise comes with how the love of language and mathematics suddenly opens into philosophy and the deeply emotional.

‘Triangle’, which is quoted on the back cover, is an example of the poet’s mathematical knowledge being used to say something about human relationships, in this case with wit. The first verse shows Payne’s wordplay:

while the final two verses take the geometrical rules and apply them to a different meaning for ‘triangle’:

The poems are sometimes in free verse and sometimes in form, including a set of three poems set in Paris, which comprises two of fourteen lines and one of twelve lines, all with complex rhyme schemes. The Paris sequence shows variety in Payne’s themes, as these diverge from the mathematical wordplay and focus more on animals and humans and our interactions. In the first, a carousel in Jardin des Plantes has both familiar and extinct creatures saddled up for our entertainment, while in ‘Statue of Lion and Foot’ in the same location, the poet decides in favour of the lion:

The third poem in the sequence takes our actions with each other and animals to its conclusion, using the ‘Shop Window with Rats’ of the title to show how our use of pest controllers typifies our other behaviours. It sets the scene in Gothic detail and yet is contemporary and authentic:

The poem then questions why the dead bodies are displayed in this way, ‘in pristine condition too’, ‘dunked in formaldehyde/then sunk in alcohol the day they died’. This is a stand-out poem for me in a strong collection, putting the reader right by that shop window where the rats are almost tangible and definitely visible. Payne makes his decision on why they are displayed:

There is something Audenesque about the dark-humoured wit and the use of poetic form and rhyme to emphasise the themes in the Paris poems and others written in form. Another sequence sees the wandering poet taking us through São Carlos in free verse and in a more casual frame of mind, but bringing the scenes to life with the same closely observed attention to detail.

In some collections it is easy to select the strongest poems and lines to quote, but in this one I could refer to many more. Payne also shows how effective brevity can be, particularly in his opening poem, which brings the geometrical theme to the personal in an especially moving way. Here is ‘The Big Leap’ in full, dedicated to ‘Peter Payne, 17.12.1929-19.02.2019’:

A final word goes to the publisher: the quality of the book production by Happenstance makes this a beautiful book to hold, due to the quality of the paper and cover, the page design and the understated cover that reveals intricate geometrical drawings and equations on the interior.