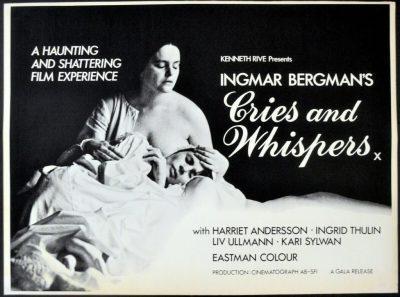 Whenever people mention Cries and Whispers (1972) they cannot escape talking about its use of the colour red.  Sven Nykvist’s Oscar winning photography saturates, without recourse to red colour filters and employing lighting from one source only, the red interiors, of a period manor house, to create a place with as much soulful character as its three female inhabitants.

Sven Nkyvist and Ingmar Berman visually construct a life of the soul with its red excitement, red despair, red exhaustion and red triumph.  Only the creamy whiteness of women’s elegant dresses; the sombre browns and blacks of large rooms and the dazzling sunlight of the garden attempt to subdue the force of red.

Is this red blood, death, a life force, a release from fierce repression, old rising conflicts, fresh anxieties, sexual longing or a violent blood ritual?  For me it’s all these things often operating unconsciously: the restricted colour palette of the magisterial Cries and Whispers hints at a gothic symbolism projected by its heightened, though frequently dream-infiltrated, realism.

I was once fortunate to see Bergman’s stage production of Hedda Gabler where redness cloaked the play.  And a few days after revisiting Cries and Whispers a London revival of Ibsen’s When We Dead Awaken.  In Ibsen’s final play one of the characters says that one day everyone will wake up to find that they have not really lived.  That could almost be a continuation, in cruel parenthesis, of the title of Bergman’s film.

Three sisters and their maid live together in a Swedish manor house in the early 1900s.  The youngest sister Agnes is dying of cancer.  Maria and Karin experience unhappy memories of their relations with men and the housemaid cannot forget the loss of her daughter in childhood.  The death of Agnes only brings temporary solace and reconciliation between the sisters.  And the maid, the one who gave unconditional love, is paid off and dismissed.

For this film Bergman assembled his regular great ensemble – actors who perform like instruments playing in a string quartet (According to Bergman the film’s title was borrowed from a music critic who wrote in a review of a Mozart quartet that is was “whispers and cries”).

We have grown very used to the intimacy of Bergman’s chamber cinema approach, his editing, precision and pure use of close-up.  However in Cries and Whispers faces continue to be examined and command our attention.  We here have performances that achieve an intensity to equal, and at times, even excel the acting in his early great film Persona from 1966 or The Shame from 1968.

Liv Ullmann, Harriet Andersson, Ingrid Thulin and Kari Sylwan are magnificent.  Men figure less so in the film.  Yet those bitter and controlling husbands / lovers are finely observed personalities.  Particularly Erland Josephson who is wonderful playing the doctor – the most sympathetic of this monstrously rigid male upper class set.

The film has many brilliantly directed arguments and feuds that expose the pain and disappointment at not achieving a less repressive and more liberating life in a certain class, time and moment in Swedish society.  However its concerns are also timeless – the need to understand and come through suffering (even momentarily) that deeply impresses, simply the basic human requirement for moments of self-forgetfulness.

The film’s earlier lyrical scenes of the younger sisters together in their garden) retain their power to comfort because of their spontaneity.  They have a tactile sense of play producing a happiness (transitory or not, almost cocooned but safely away from the imposition of men) being in sharp contrast to the domestic and internal battles they have had to fight.

And all this conflict is made to seem even more mysterious and metaphysical in such a stifling material world: for behind Cries and Whisper’s fraught dialogue lies a sensual accompaniment – a subtle sound-design of continual cries, chiming clocks, rustling dresses, violent breakages and whispered complaints.  With his technical music Bergman constantly positions and repositions the characters in his magic theatre / cinema trying hard to free them from the prison of a conditioned doll’s house.

In a remarkable career that has produced so many masterpieces, Cries and Whispers, along with Persona, is for me Bergman at the height of his powers.