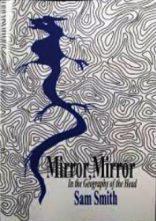 Poetry review – MIRROR, MIRROR: IN THE GEOGRAPHY OF THE HEAD: Alwyn Marriage looks squarely at Sam Smith’s uncompromising poems about mental health patients and those who care for them

This book is not for the faint-hearted. Every poem in the collection focusses on what is often charmingly called ‘mental health’ but more often relates to ‘mental sickness’; and it is clear from the insight and power of the poems that Smith has inside knowledge of the institutions that care for those afflicted. I suspect that he has worked as some kind of carer in an institution in the past, but I don’t actually know. One hint may be on page 56: ‘we new attendants wait / listen hard’ – though it is not, in general, a good idea to read biographical details into a poet’s work.

There are 13 Case Studies scattered throughout the book, some of which are searing, but all of them, I suspect, genuine or at least loosely based on fact. One of these is a two-page description in prose, but the others are rendered in blank verse.

Not content with the graphic descriptions of mental illness, Smith also, for good measure, throws in a scene from Israel, seen on a television screen:

As well as many word-pictures of troubled patients, Smith also includes a description of a new asylum which could apply to many another uninviting institution:

That slightly uncomfortable heavy alliteration in the first two lines here evokes the concrete solidity of such buildings very effectively.

It might be instructive to look at the poet’s attitude, on the one hand to the patients and on the other to the staff. Many of the poems describe the sad and troubled lives of those deemed ‘mentally sick’, and he reminds us that one in six of us will at some stage of our lives experience some form of mental illness (page 131). That fact alone gives edge to the common feeling of ‘There, but for the grace of God, go I’:

Mental illness is, in any case, a somewhat slippery concept:

The characters peopling Mirror, Mirror scream, self-harm, are deluded and frightened, and sometimes attack those who are trying to help them. Sometimes, they also discover that they get more attention when they ‘act mad’:

There are a few poems that are highly critical of the psychiatric nurses and doctors who, faced with the constant strain of interacting with people who can be violent or just plain obnoxious, sometimes crack.

Doctors, too, come in for occasional criticism for being unsympathetic, arrogant or even incompetent (page 116). However, later in the collection the poet appears more sympathetic to the hard-working staff. Smith subtly exposes their trials and tribulations, the weariness of having to make allowances and bear abuse for year after year.

He also takes us deeply into the pain and confusion of patients in mental institutions, which might well remind us to resist judging them harshly. He also suggests that a degree of humility and self-awareness is required in our dealings with them:

This is a substantial book, giving a clear, unsentimental insight into what it is like to suffer mental illness or to care for those who suffer. As I wrote at the beginning of this review, Mirror,Mirror is not for the faint-hearted; but I would nevertheless encourage you to take the bull by the horns and read this moving collection. Apart from introducing you to some robust and perceptive poetry, it may change your attitude to mental illness and make you grateful for what health you enjoy.