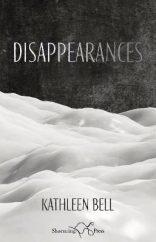 What are the disappearances Kathleen Bell speaks of? Who or what has disappeared? Her poems mostly dwell on characters from the past, dead Mediaeval spinsters and magicians and a sense of loss is what binds the poems together thematically. The strength of the collection is in the way that Bell ‘gives’ voice, to those who are ‘voiceless’ or absent from society by choice (or through having no choice because of what society dictates) and also in the range of forms in which it is, seemingly effortlessly, executed.

The book is divided into two sections, the first, ‘Balance Sheets for Mediaeval Spinsters’, is the longer and is dominated by an affecting sequence of sixteen poems addressed to or spoken by various Mediaeval spinsters and sometimes referring to aspects of their lives. Religion permeates poems which are not about women in religious orders – as might well be expected at a time when the Church was all powerful, commanding servitude, penance and pence, and when the power of the Father was translated into power of fathers. A woman speaks of being forcibly taken away from an existence she would have preferred in a community of religious women called a béguinage:

The closing couplet repeats the opening. The others are insets of what has been left behind. The matter-of-fact tone does not denote acceptance. Assonance and alliteration attest to a sensuous way of life not religious purgation although the fact that these women are in cloisters and unseen by society is symbolic of their actual status within it. Patriarchal dominance – seen in the father’s actions – shows that the daughter is property and that her status so low that she is forced to serve a younger male in the family, presumably sexually as well as other ways. That the women are not given names, only generic terms (e.g. anchoress, wanton) further renders them ‘invisible’. The wanton, at twelve years old, refuses to be married to a blacksmith so going against her father’s wishes. Anglo-Saxon inflected language denotes the passionate nature of the young girl reaching puberty who will, as much as she is able, walk her own path:

There is a tension in the poem between a young woman expressing her natural sexual desires and of a child being taken advantage of by older and younger males, as if it would be almost expected that she would be left pregnant by someone – here a male harvester – and that he would leave her. The poem isn’t in two parts but works as if it is – as the child grows in the womb and the pregnancy becomes more visible, so does the woman’s shame, and it almost seems as if she has to strive hard to stay alive and not drown herself, “for I testify against demons / who would drag me to self-slaughter.”

The fate of such a child is signalled in another poem which proceeds by negation:

The point about this sequence of poems is that status did not necessarily ‘save’ a woman from a fall from ‘grace’ or anonymity. This is shown in the triolet, ‘Epitaph for an Unknown Princess’:

The poems remind us how closely the fortunes of these women relied on the fortunes of the land. Beneath the feet of the wanton is “the fierceness of ridged furrow.” Enclosure of land to take away ownership meant evictions. In ‘Enclosure’, a poem in three sections, a single woman stays behind “with the old folk” after “the liveried men” from the lord of the manor has driven families out, but eviction is the inescapable consequence after the “hedgers and ditchers” carved up the land. The third section is a plea for mercy; monks offer shelter and meagre food, yet the woman’s destiny is to wander “the tall town” like a lost soul. It could be the same woman who speaks in ‘Loss’, where the lark’s song “Entered the world / alone, and without my name.” There is a kind of blessed freedom in nature but one which is also perilous. This poem sums that up succinctly. Small comfort for the childless woman who, will either share the long harvest or, in “a bad year”, will nurse her hunger alone.

The poems tell us that loss was personal and communal, in whatever ways the land was taken or altered. Sometimes a compromise is necessary although what is lost doesn’t necessarily resurface. “After the Valley was Flooded” is a poised unrhymed sonnet in two stanzas of seven lines. In the first part, the woman, after marrying:

In the second part of the poem remembered losses (“a blue brooch”, “a father’s crumpling smile”), are still remembered but “the old shapes lost their force.” But even though a flooded valley might be built over and repopulated, there are hauntings in dreams, of “distant bells” and especially of a lost language, of which, “the unused words twisted about her heart.”

History and art are prevailing concerns with poems that contain loss, disappearance and/or displacement. Vermeer’s art belies the fact that his home city of Delft was wrecked by a massive explosion of a gunpowder store in 1654. Seven years later, in a painting, “Roofs, sturdy brickwork / must have been here for ever … “. But if we look closer at any seemingly placid pastoral it’s likely that there will be something more sinister, “small smudges of people / … up against walls.” (‘Delft, 1661) In more recent history, the consoling expectations of the sonnet form become a bulwark about the troubling situation it evokes:

‘The Little Book of Illusions: scenes from a history of magic’ occupies a little less than the final third of the collection. ‘Transformation’ sets out the magician’s stall where by trickery and sleight of hand one thing is transformed into another and the audience will believe the truth of what they’re seeing, whether it is rice turning into coffee or wine, or an egg into a hen. The image of the dove in the final section which the magician lets:

The final words of the poem are what the dove has become, “Nothing / A blank, white page”. I wondered if this referred also to the act of transforming ordinary language into a poem, or indeed, whether such a transformation happens or not.

Incidents in the life of French magician and illusionist, Robert Houdin (1805-1871) are central to this series. ‘Instructions from Robert Houdin’ is a prose poem advising how a magician should conduct his life and once again, I thought about Kathleen Bell’s comments on what she intends for her own poetry:

A pair of connected poems suggests that both father and son were involved in fighting in Algeria. The father says ‘The Emperor sent me’, in what exact capacity we don’t know though he says, “I have French magic. I use it only for good, peace against war.” (‘Robert-Houdin in Algérie’). ‘The Aetherial Suspension’ takes the form of a letter written by Robert-Houdin’s son, Eugene in 1870. He has been badly wounded and someone is writing the letter for him in which he recalls the tricks he learnt from his father and those performed as an accomplice, specifically the one where:

It is a moving poem, which concludes with the son wishing that the father could alleviate his pain by performing the seeming miracles of magic:

One of my favourite poems in the collection is the concluding pantoum, ‘At the Station of Montparnasse’ in which a magician, who could be Houdin but isn’t named, says “I am your entertainment for today” and practises sleight of hand with a white sheet. The “you” being addressed is almost certainly “us”, anyone who would be distracted to ignore the sacrifices and poverty of those around them: “old men who stand with medals and banners … The star child [who] weeps for his stolen tomorrow … “, the beggar and the workman who “fixes the cardboard of his home.” Form and content match perfectly, with variations on the line “It has nothing to do with you. You are here for the show.” becoming more insidious on each repetition as are the disappearances which have occurred by the end of the poem, and what the “Café of the Future” betokens:

In a recent talk and reading she gave for the Cultural Exchanges festival at De Montfort University, Kathleen Bell said that she aimed for a combination of familiarity and strangeness in the poems in her first full collection and that she very much had the reader in mind and sought “to make the words dance.” She has succeeded. Disappearances is a collection where the poet’s social conscience is threaded throughout.