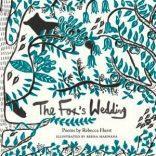 Rebecca Hurst begins her deliciously dark, magical, spiky book of poems with this instructive list in the poem “The Unreliable Narrator”. Reminiscent of the fairy tale world of Angela Carter and Sisters Grimm, her collection has familiar tropes of grandmothers, forests and animal enchantments that twist and turn onto less familiar paths.

In “The Art of Needlecraft” a child walks down a path of pins exploring what shape they might take.

(The title is possibly a reference to the dark fairy tale musical by Stephen Sondheim). This is such rich language, full of local folklore and words. Look them up and be inspired to visit.

Each poem in this collection casts a spell, catches you with a pin. But be careful. There are pins and needles aplenty here and some may draw blood. In “The Needle Prince”

Oh, such subversive violence here. Not necessarily in the shadows, but in the bright broad daylight of the Ashdown Forest.

In Hurst’s version of “The Frog Prince” we are back in her childhood.

English rain and wetness oozes though the poem.

Hurst knows the origins and psychology of fairy tales like the back of her hand. Numbers are magical, as are doors, golden keys, goose girls, the crone at her spindle, the cottage in the forest, the scuffed red shoes. Round and round we go with no escape, no way out. We are trapped in the spell of the tale like a spinning magic lantern show, or the play of light and shadow in the wood.

One of the most unnerving poems is “Teeth” the tale of a girl who cannot be tamed, cannot be bolted in, despite the best efforts of the hunter and his wife.

This reminded me of Charlotte Mew’s wonderfully unsettling poem “The Farmers Bride”, except that in Hurst’s poem, the girl does not end up locked up in the attic. Instead, she is heard barking and howling, biting her way out.

Another animal which dominates fairy tales is of course the fox, and here he is, in full red grinning regalia in “The Animal Bridegroom”. Woe betides this poor human child ….

Spared from what though? And what is to be the punishment? I’ll leave you to turn the page on that one. All we can hope for is a row of stones to guide us home, but even that may be imagined.

This is a fantastically daring and assured piece of work. My only criticism is that I found the illustrations a little twee, more like the drawings in a children’s book. I would have preferred something darker. However, that one quibble aside, The Fox’s Wedding deserves to be out with your best fairy tale books. Every poem earns in place and asks to be visited again and again.

That is if you dare to.