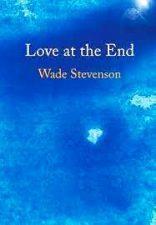 Poetry review – LOVE AT THE END: Charles Rammelkamp comments on the syntax and the substance of Wade Stevenson’s poems

The first thing you notice about Wade Stevenson’s verse is the lack of punctuation. Since all the lines begin with capital letters, this can make it difficult to parse sentences, but the sense of longing and the celebration of love are unambiguous throughout. It’s a deep, cosmic, metaphysical longing for all the women of his life, the relationships both real and potential, and, mystically, a longing for love itself. “Where Is the Amor of Ages Ago?” echoes the longing of the famous ballad by the 15th century poet François Villon, “Ballade des dames du temps jadis,” in which the concluding line laments, “Mais où sont les neiges d’antan?” Stevenson writes:

Earlier in the poem, he enumerates these lost loves: “My wife, my child, my lover, my mother.” As he writes in “My Birthing Lament,” this sense of longing comes with the territory of being alive, from the very “salty trauma of the coming / Into being.”

The word “longing” recurs throughout, in “In the Night Room” (“Will you find the lost face your longing was seeking”); “Racing to the Light” (“all the days / Of a limitless longing”); “Tell Me a Tale” (“the longing / Lasting until the darkness comes”); “I Had Ideas of Death” (“I wanted summers of August, / Aprils of spring, mornings of May, Septembers / Of longing”); “My Future Invisible” (“But the longing I had was to go beyond life”), “What’s Left of Love” (“What is endured is a life-long longing”), and “Danger” (“You always wanted to belong / To your own infinite longing”). This intense longing amounts to a “Sorrow in a Minor Key,” a poem in which Stevenson describes and celebrates that yearning, always lurking in the background, for some ideal state of being – love, Amor – that’s been part of us – part of the poet, at any rate – from the very beginning. “What remains is the pain in a minor key / Of what we lived but never knew enough of love.”

The word “Amor” likewise recurs throughout, as does “love.” In “The Journey to Amor” he asserts that sorrow could be “consciously redeemed / By one wordlessly whispered soul-sabering / word: AMOR, AMOR, AMOR.” In “Wait and See” he is just as emphatic:

Though he mentions a specific person, Maria, in “One Summer Night” (“I went there looking for you, dear Maria”), the women he addresses are nameless, general (Love at the End, notably is dedicated “To Cynthia, who was with me at the beginning”). “I Never Suspected” mentions “Women known/unknown, promised, denied/fulfilled.”

“What Was the Name,” indeed, is an ode to a ballerina briefly glimpsed from a train window on the way to Switzerland, whom he does not meet but is left wondering “what would have happened / If I had only stepped off.” “To My Much-Missed Bitch” ends:

Love indeed is Stevenson’s ultimate theme. “X marks the invisible spot” he asserts in “The Body Has Charms,” “Where the fact of love will never unhappen.” And again, “What’s Left of Love” ends with the lines:

Even the poem, “An Equestrian Event” which tells the horrific story of being raped by a fellow employee at a racetrack stable in Kentucky, contains the message. When he reported the violation to the stable manager, he was fired. But even here Stevenson is able to celebrate love.

Now three-quarters of a century old, Stevenson’s tone is saturated with a kind of regret, but the old hope and deep faith are never far away; indeed, his conviction seems actually to have strengthened with the passage of time. As he writes in “I Never Suspected”:

That knowledge is love, and it doesn’t need to be qualified in punctuation marks.