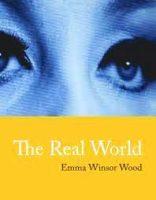 In a back-cover blurb the poet Kyle McCord describes Emma Winsor Wood’s The Real World as “an invitation to a schizophrenic internal monologue.” That invitation comes as a “business suggestion” in the first – and shortest – of the seven sequences that make up this intriguing collection, a poem called “Cold Open”:

And then comes “The Killing,” organized as a television series with nine episodes and a series finale. The series features “two damaged detectives,” hostage, criminal, gun…”Cue haunting instrumental melody” and in the end, “the good guys get away / with murder and the bad guys / aren’t really so bad.”

Clearly, The Real World, which after all is also the name of a decades-long MTV reality television series (often credited with launching the reality TV genre), plays on the notion of scripted reality, which necessarily brings in the ideas of “free will,” “authenticity,” “purpose,” etc. As the historian Daniel J. Boorstin ironically wrote (one of the epigraphs to Wood’s collection), “Nothing is really real unless it happens on television.” Or, as Wood herself writes in “The Good Place,” “This is a true story. It was on the news.”

Season 2 of “Saturday Cartoons,” which like “The Killing” is organized into television-like segments, concludes:

What is “reality”? What underlies it? Perhaps it is this nonstop internal reflection, a sort of solipsistic self-reflective observation, not unlike the Shepard-Risset glissando illusion, a cyclically repeated chromatic scale.

Indeed, the lines of “the internal monologue” often read like Taoist or Confucian aphorisms, bold statements of wisdom, the poet talking to herself. This is particularly true of the title poem. “The Real World” includes lines like:

The poem ends with the thought:

The middle poem, “Commercial Break,” probably the most comic of the bunch, breaks it all down.

Indeed, so much of the “real world” is driven by the fear of missing out (FOMO, yeah?); it’s like a religion. Or, as Wood continues later on in “Commercial Break”:

Or, as she gushes in an earlier fragment:

Everything becomes a commercial opportunity, slickly packaged; otherwise, it has no intrinsic value, no reality. Another of the collection’s epigraphs, from Don Draper, the protagonist of Mad Men, explains “The reason you haven’t felt it is because it doesn’t exist. What you call love was invented by guys like me to sell nylons.” And so, later in “Commercial Break,” Wood writes:

The concluding poem, “Westworld,” continues the onslaught of aphorisms but succinctly spells out the underlying realities, at least according to Wood. “The human machine,” she writes,

And both the poem and the book conclude:

Above all, The Real World is FUNNY. Wood’s sense of irony is razor-sharp. The third of her three epigraphs comes from the poet, Chesey Minnis: There is no differentiation between life and a costume party…Indeed, Emma Winsor Wood’s verse wears lipstick and makeup and wears bizarre outfits! The concept and construction of this collection are brilliant, and some of her lines – “The sky is a very nosy librarian,” “Feelings are solid-gold toilet seats.” – land with the power of deadpan.