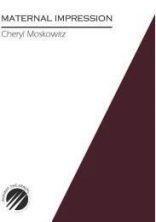 Here we find just eighteen poems beautifully presented in a slim, unfussy volume. The pamphlet title, which is also the title poem, takes the reader to a place where birth leaves a mark, makes an indentation like a footprint, and sets a permanent reminder that both mother and child are inextricably linked.

In ‘Carrying’ the poet talks of a baby “all covered up”, being carried on the underground, and proposes that,

This presents the intriguing – and very current – idea that visibility is everything and that without it there is suspicion and mistrust. The question about who is a right and proper mother and whose responsibility it is to rear children is repeated in the next poem ‘Earlier today’. In this poem, “a child becomes everyone’s / to lift up and hold, protect from harm”. There is a suggestion also that we are quick to blame and give negative labels which is a tendency that is harmful to all of us.

The next poem delves into the related theme of everyone’s right to life and respect. In ‘Breathe’ the poet evokes the words uttered first by Eric Garner and then ten years later by George Floyd, I can’t breathe. There is a prayer-like quality to the poem which calls repeatedly on Jesus to let the dying man breathe, a word spelt out in a number of different languages, adding power and universality. ‘A Son, Awake’, set out in couplets, has a similarly mesmeric feel with its repeated use of “there is” and it too gives a sense of helplessness, as does ‘You had no hands the last time I pictured you’.

There are then three poems about daughters. In ‘Shirtless’ we encounter a child who does not want to be a girl as they “are too easily broken”. This is followed by ‘Wolf Girl’ who needs to find her “own dark cave”. Finally we have a rather wonderful poem, ‘Daughter in Garden’, which describes a girl preparing to do a cartwheel. The jeopardy of this gymnastic movement stands well as a metaphor to suggest the act of seeking independence as the girl “takes a step / forward, away from the wall”.

I was quite taken by surprise to encounter next the formality of the very dense poem ‘Omne trium perfectum’, set out in six seven-line stanzas. I was reminded of Desiderata because of its many words of advice, its somewhat idealistic platitudes and the notion that everything that comes in threes is perfect. The words seem very earnest but perhaps they are spoken with some irony, more in hope than expectation?

As well as the focus on nurturing children, some poems are preoccupied with death. In ‘Grandfather’ a child realises that the suicide of the grandparent she never knew is bound up in secrets that are not hers “to undermine”, rather her mother’s. She concludes that “surely what’s dead is not an unexploded mine / but a story that, remembered, grants us feeling”.

Other poems consider the rituals surrounding death such as the washing of bodies. There is a dignity in ‘Instruction’ where the details of every step to take after the death of a loved one are listed. If these are not taken directly from existing religious practice, they certainly sound real and feel very sacred:

It was a good experience to be able to read this book in one sitting. Each poem felt purposefully related to the one before and I was aware of the clash between being carer and being cared for, between feeling alive and yet being always close to death. Moskowitz shows sensitivity and a command of different styles and forms. This is poetry that makes you think for yourself rather than imposing ideas as if by holding your arm behind your back. These are poems that stay with you and have much resonance in these current troubled times.