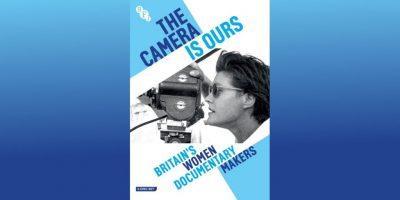 “The British documentary movement that began in the 1930’s culminating in the late sixties” is the description of this BFI two DVD set.  Today there is no cinema equivalent of that state funded movement.  Yet there are many more female documentary filmmakers presently working now, though more than likely employed by British TV.  The Camera is Ours celebrates the women employed by an earlier, much more conservative, patriarchal and patronising film industry than the present.

Women had to challenge, with intermittent success, the philistinism of a J.A.  Arthur Rank and his accountant John Davies (The men who hated Powell’s The Red Shoes which went on to become a mega hit) or a Michael Balcon (Read the indifferent letter responses to the work of feminist director Jill Craigie).  Yet somehow important documentaries got made, though too many with the standard Oxbridge male voice declaiming “a voice of God” authority perhaps trying to reassure us, the audience, if these “ladies” overstepped their mark.  Thankfully these very creative women often did.

The longest of these short documentaries is 23mins.  And the shortest is 9mins.  Yet brevity is an artistic nod to the aesthetic concision of their achievements.  None of these films is a masterpiece but that’s not the point.  They are all important, generally challenge social mores and are well made (Only Muriel Box’s film The English Inn (1941) can be called worthy and a bit dull, though even that manages to slip in normally unheard of, at that time, lively images of women enjoying a drink with the men folk).

Before viewing this set Muriel Box and Jill Craigie where the only names that registered with me.  So what about the lesser known filmmakers?

In 1935 Marion Grierson (The daughter of John Grierson – a godfather figure of documentary) made Beside the Seaside: here the workers and their families escape the city streets, of a hot summer, to hit the coast and cool of.  Images of the British relaxing are accompanied by a short poetic commentary of W. H. Auden to the sound of brass bands; even the John Ford favourite “Shall we gather by the river” departs from the sea to go inland and be played, at night, over an Odeon cinema in Brighton.  Lots of lovely touches like this make for a witty and engaging social portrait of the nation determined to have their hard- earned fun.

After the human animal we have the different wild ones who are admitted as new occupants to London Zoo in Evelyn Spice’s Behind the Scenes (1938).  I loved the shots of zoo employees massaging the stomachs of a young frog and alligator.  The British appear a calming race working their wonders on the agitated.

They Also Serve (1940) comes with a dedication to “the housewives of Britain” who serve with a strong matriarchal power as much as their sons on the battlefront.  “There’s one thing I’ve got Dad at home this time.” says a grateful Mum after entertaining a soldier, and the boyfriend of a young neighbour, on leave.  There’s a suggestion of Humphrey Jennings in the beautiful series of dissolves, for the family, at the end of this warm and maternal film.

The male narrator of Four and Twenty Fit Girls (1940) would have it known that to be successfully maternal and housewifely then women must be physically fit.  “Well exercised feet keep you fit for your housework” he enthuses in the women’s keep fit class.  Hardly anyone stumbles in their well choreographed dance movements.  It’s a routine that now looks twee and dated yet director Mary Field efficiently directs, no doubt influenced by Busby Berkeley, though the women are not glamour fluff but strong in a military, verging on Amazonian, way.  No matter the film’s propaganda objective: it is war-work more than housework that appears to be their real calling.

Birth-day (1945) gives us some shocking statistics on infant mortality in Scotland; a paternalistic army officer (who lectures a soldier on the process of childbirth); a wife trying to shake of her neighbours folklore round childbirth all intercut with a composition or two that had me again thinking of Humphrey Jennings.

Homes for the People (1945) Kay Mander would have been aware of Edgar Anstey’s 1935 Housing Problems and it’s depressing to learn that ten years after that expose there’d been little social improvement.  Women who live in city centres, the suburbs and in the countryside are allowed to voice their frustration at the state of their homes.  And they protest with an honesty and resigned humour that impresses.  We know its all scripted dialogue but that doesn’t matter.  A film of neo-realist zeal and it has a female voiceover!

Children of the Ruins (1947) War robbed children of their childhood as they had to take on adult work responsibilities.  Not only that but in peace time they were malnourished and possibly orphaned.  Jill Craigie’s sharp reminder of this injustice takes an internationalist and socialist view.  This was also the time of the formation of UNESCO and for a second I glimpsed the English writer J.B.Priestly – another socialist that Cragie presumably respected.  A strong, gritty film and very targeted.

Back in the UK mental health is the issue of Margaret Thomson’s The Troubled Mind (1954).  This is a compassionate and sensitive account of a young nurse adjusting to her new job in a hospital / asylum in the country.

Its opening scenes are remarkable.  Inside the chapel of the institution a middle aged woman plays, on her violin, a pleasingly tonal, light classical piece whose lyricism is enhanced by sunlight shining on the stained glass windows.  Outside the trainee nurse and her supervisor remark on the music.  They are pleased.  Then the violinist makes a harsh, scraping and discordant noise.  The nurses enter the chapel to calm down the distraught anxious patient attacking her instrument.  Sobbing, the woman is taken away.

The sequence has a poetic force that took my breath away.  It’s strange and disconcerting and might have looked at home in a surreal film by Georges (Eyes without a Face) Franju.  Nothing else in The Troubled Mind has quite that intensity, however this is a public information film whose remit is not to shock but educate on the treatment of the mentally ill.  And it does this admirably.

The box set is finished off with Something Nice to Eat (1967) that’s an advertisement film for the Gas Council with a brief appearance of the iconic model Jean Shrimpton.  Admitedly a lightweight piece though filmed in a beautiful Technicolor that made each meal look like a hallucinating work of art and very 1960s!

Finally the outstanding extra on the set is the Lizzie Thynne’s Independent Miss Craigie (2020) a dramatised documentary on Jill Craigie who was one of the first woman directors in British Cinema.  It’s excellent and achieves an intelligent balance between biopic and documentary.

Craigie was a strong, independent socialist filmmaker.  You want to cheer her efforts to get projects realised in the face of often stupidly stubborn and mindless opposition.  It’s an affirmative film but not without a certain sadness and regret.  For its Craigie’s life and struggles that take, and should take, centre stage more than her finished films.  Many of her completed films are very good and the unrealised ones sounded so promising.  For in Craigie’s case it wasn’t just a case of her gender creating obstacles to film work but politics – being a committed socialist can often brutally obstruct you in the creative industries.

The Camera is Ours is self-recommending.  The BFI are to be congratulated for producing this absorbing set of films.

All About Our Mothers London Grip Poetry Review – Cheryl Moskowitz