Hope is a Girl Born in a Kyiv Bunker 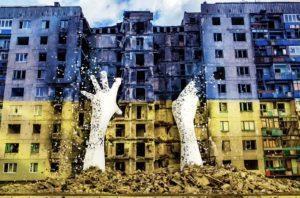 Suspended in a moment’s silence, Time gathers herself.

How are you today? Her voice tells me she has not recovered from COVID.
Have they sacked that awful delivery man from Sainsbury’s who attacked you?

Not a word from Sainsbury’s or the police. The bruising in my hand has turned blue and yellow in sympathy. Pain takes her own time to heal. My mind will not let me rest, keeps me awake, raging against the injustices of the world.

Our bodies, minds and souls may be forced to live with the injury of injustice, but they never forget. Just the way we will never forget waking up to the news that Russia invaded Ukraine. The way we remember 9/11…

I’ve not forgotten the day Saddam Hussain marched into Kuwait. Or the Tiananmen Square massacre. After a pause, I ask: How is your mother? My friend lives in London, her mother in Moscow.

She refuses to believe Russia invaded Ukraine. What war? She asks, as if I was feeding her lies. I used to buy food and medicines for her online, my credit cards no longer work. My niece and her daughter have fled to Poland from Dnipro. I can’t bring them here. What is our government doing?

When in trouble, we are on our own, I sigh. Friends in Kyiv tell me how their family and friends in Russia no longer speak to them. They support President Putin’s claim that Ukraine is not a sovereign country, but a satellite state like Belarus. They don’t accept Kyiv is older than Moscow. Ukrainians no longer want to be part of Russia. They are not one people.

Putin reminds me of my ex-husband, she sniffs. He used to beat me, rape me, claimed he loved me. Even after I managed to escape, got divorced, he thought I belonged to him, that I had no independent existence of my own! I felt unsafe until he died of a massive heart attack.

There is hope! I exclaim, despairing of the injustice of Shane Warne dying of a heart attack. Can’t one his generals dispatch him in an Et tu, Brute style coup d’état?

No one can get close to him. He’s paranoid about catching COVID, isolates himself in a dacha. Life is full of surprises. The Ides of March are almost here.

If he wants to make Russia great again, be ‘Emperor of All Russia, Great Father of the Fatherland and the Great etc.’, why not emulate some of his ways – come closer to Europe, lead his army personally into war, not send young conscripts to be killed?

Who would have thought Putin would transform Zelenskyy into a real hero? Talking of conscripts, did you know those sent to Tiananmen Square had been drugged, hypnotised, turned into killing machines unlike Putin’s conscripts.

You don’t have to be drugged to turn violent. The delivery man attacked me without any reason. Women are killed all over the world by their partners, children by parents. It was Indian soldiers who responded to General Dyer’s order to kill their own people in the Jallianwala Bagh massacre. If only they had turned their fire on Dyer… If Russian conscripts and soldiers refuse to fight… If Hitler’s men, if Putin’s generals…

Humans are the worst of all animals. Under Stalin’s regime millions were killed. He was a small man, not unlike Putin.

Zelenskyy is not exactly tall, but he is a decent human being. Peter, the Great was tall, but he was brutal. There is no accounting for character and height.

Putin wants to colonise Ukraine like Stalin. The intelligentsia were jailed, deported, killed – teachers, writers, artists, thinkers, political leaders. Ukrainian churches were destroyed. Thousands sent to labour camps, families were separated, children sent to Russian homes to be ‘educated’, peasants were starved. The dead and deported were replaced by non-Ukrainians. In Crimea half the population perished. Hitler and Stalin soulmates… Even Ashoka did not wreck so much devastation on Kalinga. Surveying the aftermath of his victory, he is supposed to have said ‘If this is victory, what’s defeat?’ He converted to Buddhism. Can’t see Putin becoming a Buddhist.

Me too. In Kyiv people had gone out the previous evening to have a good time. They did not think Putin would start WWIII. He kept on saying he would not invade.

Biden had been warning that an invasion was imminent. Why then did the USA nd NATO not do more? Disinformation is not new. These days it is disseminated with the press of a button. Truth takes a long time to be revealed. We are what we see, are capable of seeing. Among the first people killed in Kharkiv was an Indian student. Yet, Indians, intelligent and educated, justify Russia’s attack, do not think destroying a sovereign nation without provocation is an outrage. Cannot believe India abstained from voting in favour of the UN’s General Assembly resolution seeking to reprimand Russia, demand Moscow withdraw troops.

Putin has lost his marbles, the invasion of Ukraine is his swan song. The question is how much damage will he inflict? Something needs to be done. Putin has to be stopped. This invasion is a violation of the Budapest Memorandum that was meant to assure Ukraine’s sovereignty and territorial integrity in exchange for her nuclear arsenal. Is there no honour left among men? Remember what they did in Syria, Yemen, Afghanistan… lives of women and children shattered. Again and again.

UK, too, has a lot to account for – laundered money distorting the price of everything. The EU’s dependence on Russia is tragic. Feels like Putin has been grooming the EU just the way predatory men groom young girls for prostitution. When will NATO wake up? I can no longer listen to the news. There has to be some good news. All this sacrifice and agony cannot be for nothing. It is absurd to look upon the enormous amount of pain that abounds everywhere in the world as serving no purpose at all…

As long as there is pain, there is hope. In the middle of so many deaths and so much destruction, think of the little girl, Mia, born in a Kyiv subway bunker.

Shanta Acharya was born and educated in Odisha, India, Shanta Acharya won a scholarship to Oxford where she was among the first batch of women admitted to Worcester College. After being awarded the DPhil in English, she was a Visiting Scholar in the Department of English and American Literature and Languages at Harvard University. The author of twelve books, her latest poetry collections are  Imagine:  New and Selected Poems (Harper Collins Publishers,  2017)  and  What Survives Is the Singing  (Indigo Dreams Publishing,  2020).  Her poems have been translated to Bengali, Chinese, French, German, Hindustani, Odia, Russian, and Ukrainian.
www.shanta-acharya.com