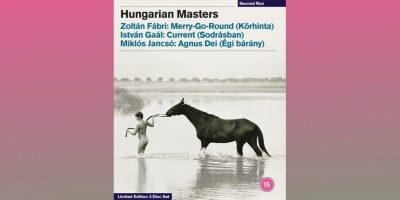 We usually categorise the “New Wave” film movements of the 1960’s as principally originating from France and Czechoslovakia.  The Hungarian contribution tends to be over-looked.  It also produced distinctive and innovative filmmaking.  Second Run, who has a specialist interest in East European cinema, has just issued a box set containing three films by Istvan Gaal, Zoltan Fabri and Miklos Jansco.

Miklos Jansco is with fellow Hungarians Istvan Sabo and Marta Meszaros an internationally well known director.  So just after the 100th year since Jansco’s birth it’s gratifying that his films are being reissued by Second Run.  Zoltan Fabri’s films (more old school than either Gaal or Jansco) have been totally forgotten though he was once a regular festival prize winner.  As for Istvan Gaal his early features were highly praised by famous directors and critics in the 1970s, then he went to work in television and fell into critical neglect.

Although all three directors are obliquely or directly critical of the nation state or Communist rule their filmmaking styles are very different.  With Fabri we have the decline of a socialist technique and manner (A marked East European humanism).  Gaal brings a cooler and existentialist eye to character and situation (drawing on Italian art cinema and the Renaissance).  And with Jansco we see an expressive concern with form closer to radical contemporaries like Godard.

Current (Sodrasban) 1963 has the simplest of stories.  It’s a hot summer’s day and six young man and two young women are picnicking in the country near a deep river.  The men go for a swim.  They dive to the bottom of the river to bring up a handful of clay so as to show off their underwater skills.  After their swim the men meet up with the women only to realise that one of the swimmers (Gabi) is missing.  They anxiously search for him but to no avail.  Next day the police are called.  They drag the river and find Gabi’s body.

Current has been compared to Antonioni’s L’avventura (1960) where Anna mysteriously disappears on an island whilst a group of friends are on a boating trip.  Unlike Antonioni Gaal’s missing person is found.  Yet similarly both films explore the emotionally piercing effect of death on the lives of others.  “What would you do if I drowned?” asks one of the young men to his mother.  It’s almost a reflective aside on how much it would really matter and an adolescent anxiety of generational differences and concerns.

It’s a film about loss, remembrance and responsibility.  To die young and healthy is so cruel and Istvan Gaal records this in a most moving way.  His restrained detached camera employs eloquent medium-long shots of exteriors and a subtle editing of objects in rooms suggesting a Cubist aesthetic commentary on events (my one minor criticism here that Gaal’s mainly judicious editing occasionally jars).  However the honest and soulful mood of Current is so memorable as to erase any tiny flaws.  This exquisite and poetic observation of youth, violently shocked into change, is universal and richly deserves its reissue.  I shall often return to the haunting Current.

The Merry Go Round (Korhinta) 1956 reminded me of an age long before blu rays and videos existed when your only opportunity to see foreign films was on BBC 2.  They’d screen 50’s Russian cinema classifiable as social realist and directed with either great skill or academic solidity.  I’m afraid The Merry Go Round (though highly praised by Truffaut in the fifties when he was a film critic) for me doesn’t quite justify its great reputation and fell awkwardly between a duty and a pleasure to watch.

First the pleasure.  The Merry Go Round is an attractive love story of a young peasant girl and boy whose parents support the collective farm organisation or reject it: indirectedly this a critique of communist directives disguised by youthful romance.  Unfortunately I frequently found the pace of The Merry Go Round inexorably slow when it came to the numerous reaction shots (not long-takes) held far too long in angry conversations between children and parents.  This constant holding back proved wearying.

The film’s most exciting moment, and a tour de force, is the scene with the young Marie (Mari Torocsik) joyously riding the fair’s merry go round and looking down at her disapproving mother and father.  A technical triumph repeated in flashback or dissolves.  But like the domestic scenes it becomes over-emphatic and the sensual dance sequence between Mate (Imre Soos) and Marie harks back too much to escape on the merry go round to weakens an otherwise earthy display of erotic defiance.  Still The Merry Go Round is a hard film to dislike given the sincerity of its acting and affecting romantic detail.

Agnus Dei (Egi Barany) 1969 has been described as the most enigmatic of Jansco’s films.  I would describe it as puzzle film whose choreography of actors is alternatively stimulating and forbidding.

And I suggest you let it spread over and bite your senses you before you read Tony Rayn’s excellent booklet notes.  Both victims and perpetrators appear to be acting out a mad political ideology in a sort of hypnotic Brechtian trap.  Agnus Dei is set during the “Republic of Councils in Hungary” which lasted for 133 days in 1919.  This communist imposition proved to be harshly violent and de-stabilising.

Jansco films as if events are a riotous, but artfully structured, modern dance and those who ‘dance’ are shot dead to rapidly rise up again and again in political turmoil enacted in a field on a summer’s day.  Allegory, political satire, and poetic realism make for much agile action as Jansco’s mobile camera attacks, confronts and circumvents the constantly killing of a priest, mass shootings, the stripping of prisoners and torture delivered not physically but as a read-out-aloud list of practices (an amazing scene revealing how forcefully words can convey the horror of torture more than actually showing it).

Tony Rayn’s parallels Agnus Dei’s fascism and the fascism of Pasolini’s 120 Days of Sodom made six years later.  Yet where Pasolini’s film is sombre and horrific Jansco’s feels crazed and cinematically exhilarating.   Agnus Dei is a flight and/or fight film in the face of a brutal, though historically brief, authoritarian order.

There is some dramatic repetition in Agnus Dei but Jansco has such a commanding sense of ritual that grips you even when you never quite grasp the meaning.  I cannot think of a political drama quite like Agnus Dei with its original swirl of ideas and events.

Theatrical tableaux combined with a dreaminess that’s never didactic: instead of preaching we have games of punishment.

Hungarian Masters is a remarkable and rewarding trio of films.