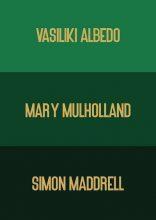 All About Our Mothers

Poetry Review – ALL ABOUT OUR MOTHERS: Sue Wallace-Shaddad admires a powerful collaboration by Vasiliki Albedo, Mary Mulholland and Simon Maddrell

All About Our Mothers is the remarkable result of a collaboration between three poets in response to a call-out from Nine Pens. The theme of ‘mothers’, emerged from the poets’ discussion on how to approach the publisher’s challenge. Interestingly they did not write in response to each other; they mainly brought existing poems to the table and then collaborated on selecting, editing and ordering the poems. The result is a collection of highly distinctive voices which share a common bond – the impact of mothers on their children.

The relationship between mother and poet is at the heart of each selection of poems. None of the poets shrink from the intimacy of this. A sense of threat imbues Albedo’s poem ‘I watch a bear with her sick cub’. At the end, however, the child becomes the one who threatens: ‘My heart ripens like a nightshade’. In her poem ‘Hard-boiled’, the intransigent nature of the mother is exposed as she forces her child to eat a raw egg ‘Blended, broken yolk and see-through slime’. The poem ‘Therapy Cat’ recounts cruelty to a cat (given to the child by her therapist) which is in fact cruelty to the child. She creates her own survival strategy:

‘Last Day’ has great poignancy. Albedo writes ‘Seven years of cancer and still we haven’t reconciled’. The difficulties of the mother/daughter relationship are evinced in the couplet:

The poem ends ‘I love you, I’m sorry echoing between us’.

Mulholland portrays a very different relationship with her mother, using a painterly and mystical style. In ‘Mother’s Child’

The prose poem ‘Comb’ picks up on some of these themes, ending with: ‘You were Pisces, liked dreaming. You would gaze at the moon as if she belonged to you’. I particularly enjoyed the poem ‘The art of daydreaming’ with Mulholland’s imaginative leaps and rich mix of imagery:

The reader is told ‘Her breathing is the ocean’ and ‘My butterfly mother is sky’. There is an element of elusiveness and unreachability about these images and a sense of a child’s wonderment. In ‘The Canal du Midi where I find my mother’, Mulholland describes her mother as part of the landscape: ‘At first she’s a road / edged by plane trees’ and later in the poem ‘She yearns to be organic / like the river’. The villanelle, ‘Daisy Ring’ is a beautiful poem about inheriting a ring:

Simon Maddrell opens his selection of poems in a sparse blunt style in ‘There was a hole’, transmitting a child’s feeling of abandonment:

The detailed description of the child using flattened-out cricket ball leather to repair the sole of his shoe, grounds the poem. ‘Only a Mother can look with’ is a poignant list of the ways a child, now grown man, remembers his mother. The poet’s uses statements about eyes and seeing to create emotional complexity:

The mother’s difficult past is recounted in ‘She never came unannounced’. In the first few lines, the repetition at line-end of ‘did’ is very effective. creating the sense of her presence, as well as the sound of a knock on the door:

The second line is then repeated in the moving last section of the poem:

Repetition is also used in the striking poem about the death of the poet’s mother ‘Penny’. ‘The moon cracked open / with a crackled breath’ becomes ‘the moon promise cracked / with a rattled breath’ and ‘A cardiac rock grief-spilt’ becomes ‘her cardiac rock lung-split’. Harsh consonants and short lines express grief. ‘Elegy’ is a short poem which also packs a punch:

Maddrell’s final poem, ‘The church’s oak creaks into silence’, has ‘mother carried in a ship of griefs’ and ends with powerful imagery:

The poets have all mined deep memories and feelings in writing these poems. It is a privilege for the reader to be allowed in to these powerful expressions of complex relationships.

Hope is a Girl Born in a Kyiv Bunker The Camera Is Ours – BFI dvd set 2022. Review by Alan Price.