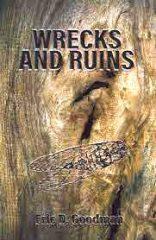 Eric D. Goodman’s new novel, Wrecks and Ruins, is all about bonding. The protagonist, Stuart Miller, is devoted to his high school buddies, Skip, Clint and Dana. Over the years, they get together periodically for stag weekends, to reminisce and reality-check. Bonding with a member of the opposite sex is more problematic for Stu, and that’s really the heart of this charming, thoughtful story.

After an introductory chapter in which we get the basic gist of Stu’s character, a collector of broken objects – wrecks and ruins (“they have histories, not unlike the experiences that created character in people”) – the novel begins in Las Vegas during the winter of 2020, that first year of the pandemic. Stu, Skip, Dana and Clint have gone off together for a lost weekend in Las Vegas. They are men in their early 50’s behaving as if they were still in their twenties. Stu is on the cusp of a momentous event. He and his wife Tiffany are about to divorce.

The three men gamble and drink and stay up all night, meet some bar girls and return to the hotel for some hot tub action. As they wander the streets of Las Vegas with the girls, they witness a car crash, a Rolls Royce colliding with a Toyota Corolla. Stu recovers the hood ornament, the Spirit of Ecstasy that adorns the Rolls. Even in the midst of debauchery, he is focused on his collection! His companions scoff at him, and Stu explains his philosophy:

Back at the hotel, in the hot tub, Stu relaxes into reverie, and we learn about his relationship with Tiffany and the seventeen-year rhythm of the Brood X cicada. Stu’s first love, in high school, a crush on a girl called Skye, occurred in 1987, when the cicadas had emerged. She breaks his heart, and he gets the inkling that all love is brief and evanescent, like the frantic mating of the cicadas. When the cicadas return in 2004, Stu attends Skip’s wedding with Leona, a relationship that endures, but Stu is skeptical. The “overbearing love songs of the cicadas” seems a metaphor. “For Stu, this sound and feeling came to epitomize the weekend, to represent love itself.” More explicitly, he reflects,

Stu is like the protagonist of the old Rolling Stones’ song, “Sitting on a Fence” (“All of my friends at school grew up and settled down, and they mortgaged up their lives”). Yet later that year he meets Tiffany Sher, a doctor, with whom he feels a real rapport, and they begin to see more and more of each other. Stu lives in Baltimore, where he works as a claims representative for an insurance company deliciously named Wreck of the Hesperus Insurance. Stu and Tiffany generally enjoy each other’s company and like the same music (music is an important element in Wrecks and Ruins: R.E.M., Nirvana, Counting Crows, Robyn Hitchcock, Frank Zappa, Tom Waits and others form the sound track; their first date is an R.E.M. show in DC). They go to museums together, attend concerts together in Baltimore’s Inner Harbor, Towson, Annapolis, the 9:30 Club in Washington, Wolftrap. They usually meet at Tiffany’s Mount Vernon digs, but Stu finally brings her to his home in Bayview and shows her his collection of broken objects. She’s kind of gobsmacked.

We learn all of this while the buddies are in Las Vegas, and then comes part two, in the summer of 2021. The cicadas are back and Stu and Tiffany have planned a sort of “un-marriage” ceremony in Sherwood Gardens. At this point they have been married for over ten years, but we won’t learn about this until later. Clint, Skip and Dana and their significant others are present as Tiffany and Stu let each other go.

Telling the reader “what happened next” in chronological order is unfair, because part of the charm of this novel is that chunks of time are related out of place, filling in the blanks of our understanding. For instance, we learn only later that Stu and Tiffany had gotten on each other’s last nerve during the quarantine, when they were constantly in each other’s company, that they’d gotten sick of each other. “Tiffany wanted to disengage, too. She loved him, but wasn’t in love with him. They were best friends…But they no longer seemed soulmates.”

The novel wraps up in 2023, the remaining buddies hiking in Bryce Canyon, Utah. Clint, an alcoholic, has died in a car crash in Ohio, a couple of years earlier, and they’ve given up the debauchery for more healthful reunions. Tiffany accompanied Stu to Clint’s funeral, and though they’ve both spent the past several years dating other people, gradually their relationship morphs into a more satisfying understanding. Stu has begun exhibiting his photographs of wrecks in galleries and has developed a following. The broken pieces bond in unexpected ways, and Stu’s philosophy is both vindicated and undercut. But no spoilers here! You have to read it yourself!

Wrecks and Ruins is best summed up in one of its epigraphs, from Oscar Wilde, both snarky and wise: “Some things are more precious because they don’t last long.” Goodman is a talented storyteller.