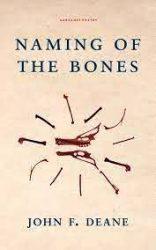 The house of poetry has many mansions—and John F. Deane’s is, on the surface, an unfashionable one. It takes courage to write directly Christian poems in a secular age, at a point when more people know more about the Kardashians than they do about Cuthbert, Aidan and Colmán. Not that I think Deane would be daunted. His witness is grounded, his faith unshakeable. And Naming of the Bones comes out of a tradition of writing from Ireland that celebrates the luminous beauties of the West, the islands and the sea (think of Ó Criomhthain and Flower on Great Blasket, Synge on the Aran Islands or Dairmuid Ó Péicín on Tory Island) and the rigours of a life lived with the sun and the stars vivid above your rooftree.

Deane himself grew up on Achill Island, County Mayo, and time and again he’s there, on the shore, in the churchyard, at the school gate… It’s an Eden with shadows, a kind of hortus conclusus. ‘In the enclosed garden there is the high proud mastery / of hollyhock and delphinium…’ but ‘Outside the walls there is the wilful human violence, darkness / of the common soul…’ It’s a quest for the resolution of this opposition that animates much of Deane’s engagement with life as a believer. How shall the poet remain true to his conviction when ‘Belief, with its creel of ritual and mystery, becomes / difficult. …’?

The answer lies in the sacramental nature of Deane’s created universe. Even the wind in the washing-line is pentecostal: ‘…the keen presence / of the breath of life, the way the Spirit came whispering fire / to the churches, that Spirit, more gannet perhaps than dove, // that white-flash down-dive welcome and daunting.’ If you didn’t know the trinity of Deane’s declared influences—Herbert, Hopkins and Heaney—it wouldn’t take you long to identify one of them from that last quoted line. Indeed, by the fourth poem in this book he’s inhabiting the Windhover’s nest with his own ‘Kestrel’

It’s a high-risk strategy, but Deane is a skilled observer-of-things and he has the gift of a silvery tongue, the true poet’s flair with words. He’s entirely at home ‘with heather-tuft and turf-bank, with curlew-call / and the constant love-nothings murmered to the coast // by soft-capped waves.’

His avatars are often the early Catholic monks who gravitated to the western islands to establish their communities. In ‘Found in the Margins: 6th Century’, he travels back in time to view the world through the eyes of a Brother labouring in a monastery scriptorium. For the unnamed monk,

Leaving aside whether the Brother is likely to have spotted a kestrel on a hare carcass, the language here is richly evocative: the shivering goose quill, the verbs ‘worry’ and ‘wrecking’, the sounds of the waves on the rocks, even the half-similes – ‘something like’ – for the uncertainties of faith. All this is the assured writing of someone who has spent a lifetime in the contemplation of such things.

The only danger when you have gifts like these – and Deane’s spiritual subject-matter – is that of over-writing:

Nothing wrong with this (from ‘Aidan: a Life’), but in comparison with his more astringent writing, the flame-Christ-fire-smoke metaphor trips rather easily off that silver tongue, and the listing, for all its alliterative foison, just seems a little on the lush side.

In general, though, it works well when the mysteries of belief are mediated through the rapt holiness of the monks:

The use of line and stanza break and repetition here enacts the reaching toward grace with consummate dexterity.

Deane’s talents are best employed in the lyric rather than in the Grand Statement, I think. ‘Quartet for the End of Time’—alternately in verse and prose-poem paragraphs—gets ravelled up in, well… words. And my other reservation could be turned upside down. You could say Deane is unafraid to face the big topics head-on. The Resurrection, for example, in ‘In the Small Hours’. (‘the whole cosmos must have drawn itself // together and shuddered.’) Or the graphic rendition of the Crucifixion in ‘No Offence Intended’. The same unflinching gaze is evident in the title poem, which follows. The first half of that poem again contemplates the physicality of the Crucifixion, but it modulates to a different perspective in the second half:

I have absolutely no doubt of the sincerity of this—the desire to illustrate the doctrine that God, in Christ, took upon himself the suffering of the world; to tell of the Saviour’s love which offers to the faithful succour at times of immense grief. But what happened on that day was not an ‘act of God’ nor an unforeseeable accident. It occurred as a consequence of human failings. To cast it in a purely spiritual context without reference to the societal and political ramifications is to risk muting its significance. It’s interesting that the line breaks seem less purposeful here, the ‘And yet’ more willed than explained. The figure at the window is a powerfully emotive image. The Saviour is not there, and four lines later at the heart of it.

The same identification of the child with Christ’s suffering occurs in the poem entitled ‘Refugee’, in which the photograph, much reproduced in the press, of the drowned three-year-old on a Mediterranean beach becomes an object of veneration:

Again, I’m uneasy with this comparison. The boy is Christ. Christ’s suffering was made in atonement for all our sins, and Christ is there in all suffering. I don’t know what faith the child’s family share, but the approach to a subject like this requires immense tact. Indeed, there may be some pain so raw and so personal, whereof, in respect, the outsider just can’t speak.

John F. Deane would refute this. In ‘Like the Dewfall’, the final, major sequence of the book, he’s not afraid to take upon himself a role many contemporary poets would shy away from: ‘the words I write’ he avers, ‘…seek to clarify, and they / – in their unruly way – attempt to prophesy…’ His is a rich, affirmative poetry, always seeking to reveal the purposes of a loving Creator. It understands its origins, and in the end transcends them:

You feel that in despite the efforts of the Brothers this is a man who was born in one part of paradise and whose spirit rests there still—a poet who will be always ‘on the verge of prayer, / conscious again of our world’s grace…’

I’d recommend this collection especially for its pinpoint observations of the island world and its atmospheric recreations of childhood. Also for its determination to grapple with time, mortality and eternity. At one point in the sequence ‘Grandfather Ted / John Connors’ Deane enumerates again, among the multitude of souls beyond death, his ‘good friends, Herbert, Hopkins, Heaney…’ With friends like that, who needs reviewers?