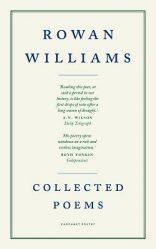 This is a substantial collection whose depth and variety will bring both pleasure and challenge to the reader.

In approaching the work of a man of such huge intellect and inspiring faith, one might expect the poetry to be either cerebral or pious, but I can assure you that this collection is neither. Instead, it ranges through time, around the world and into the heart of a contemporary human being. While many of the poems give up their secrets at first reading, others require more thought in order to follow Williams into the labyrinth of his explorations, but such necessary work is always worth the effort.

It is well-known that Williams is a fine linguist, and the many translations of work by other poets in this collection bear testimony to that. There are poems from Welsh, German and Russian, bringing works by such great poets as Rilke, Ann Griffiths, T Gwynne Jones, Waldo Williams, Euros Bowen, D Gwenallt Jones and Inna Lisnianskaya to wider notice. These translations are satisfying in themselves and such a compendium of international poetry is exciting; but given the length and breadth of this book, I think there might perhaps have been a case for publishing these as a separate collection of ‘poems in translation’. As it is, Williams’ most recent poems do not appear until the last 50 pages of the book. That may be inevitable in a Collected Poetry, but it would be a great shame if readers ran out of energy or time before encountering these treasures.

In the poems, not only do we meet Williams’ parents and children, but the pages are also buzzing with such characters as Augustine, Merton, Cranmer, Milton, Nietzsche, Tolstoy, Charles Causley and Simone Weil. There is a sequence of poems based on Shakespeare’s plays, reflections on works of art from Rublev to Antony Gormley – and in fact the book ends with a light-hearted reflection on being part of a “Panel on the Arts”. Despite Williams’ preference not to be categorised as a specifically religious poet (he is often quoted as saying I dislike the idea of being a religious poet. I would prefer to be a poet for whom religious things mattered intensely), it was good to also find a decent number of meditations on Christian festivals, events and experiences, including several in the translations from Welsh.

There is darkness as well as light, such as in “Yellow Star”, “Martyrs’ Memorial, Namugongo” and “Nagasaki: Midori’s Rosary”.

But there is also humour, as in “Post-vax Splott Community Health Centre” and in the fast-moving “Alone at last”:

There is environmental awareness:

There are charming word pictures, such as this one of tadpoles in water:

How I would love to have written that description!

And, of course, there are spiritual delights, many of the more religious poems coming towards the end of the collection.

It is surely to the benefit of us all, that after an all-absorbing, ever-moving professional life as Archbishop of Canterbury, head of the world-wide Anglican Church, Rowan Williams, in retirement, now has more time to devote to poetry. May he long continue to do so!

Among my personal favourites in this collection are the evocative “Jerusalem limestone,”
and “Swansea Bay: Dylan at 100” – a particularly musical piece that sways and swells with the movement of the sea. Others I warm to because of an affection of my own for their subject matter, such as “Nevern Churchyard. The Bleeding Yew”, “Caldey” and “Bach for Cello”. There are so many gems that I would like to share, but it is better to encourage you to buy the book and discover them for yourselves.

It will be obvious that I enjoyed this collection, but (sadly) I don’t think I can finish this review without expressing my deep disappointment that such an important book is marred by poor editing. If there were just a few typos and mistakes one could pass over them, but I noticed at least twenty glaring, inexcusable errors in the typesetting and printing. Carcanet is normally such a high quality publisher that I assume there must have been some sort of technical problem at the time of publication, or an important part of the process of proof-reading was accidentally missed. Whatever the reason, I very much hope that the publisher will correct and re-print the collection as soon as possible. This book deserves better than to be spoiled by such carelessness.