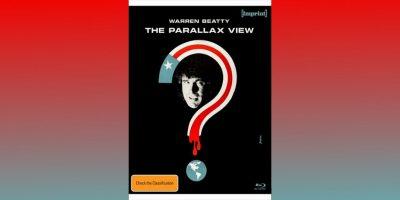 The Parallax View contains a celebrated film within a film.

Joe Brady a rebellious Oregon reporter, masquerading as a violent anti-social candidate, is tested by the sinister Parallax Corporation.  He watches a montage of incisive images both patriotic and subversive beginning with cloying conformity and ending on a jangling note of disturbing contradictions.  Love, Hate, Family, Country shout out their clinging allegiances until Nazism is equated with American democracy and apple-pie order is only a perilous step away from poverty, destitution and war.

This brilliant Brechtian rupture reminded me not just of Malcolm McDowell’s torture scene in Clockwork Orange but even more a sequence from Soylent Green.  At the end of that film Edward G.  Robinson takes a pill and goes off to lie down and die watching a huge film projection of images of nature accompanied by Beethoven’s Pastoral symphony.  I’ve always imagined that if you did survive as a hired assassin for Parallax then your induction course would be book –ended by a similar epilogue thanking you for your hard work: nightmares of control can so easefully overlap in the political thriller and science fiction.

After the death of presidential candidate Charles Carroll a government committee decides it was the work of a lone killer.  However three years later six of the witnesses to the killing have died.  A frightened TV journalist Lee Carter (Paula Prentiss) calls on Joe Frady (Warren Beatty) and says she’s going to be murdered.  Convinced his former girlfriend is paranoid Joe ignores Lee.  Shortly afterwards she’s found dead from a suspicious drug overdose.  Frady is shocked and begins to investigate only to uncover a very real conspiratorial force that threatens to eliminate him.

I’m glad that the screenplay of this terrific film shifted its emphasis to the assassination of a Robert Kennedy type character, and not JFK (which the Parallax novel did.)  Unlike Oliver Stone’s often ponderous JFK film The Parallax View avoids being trapped in a conclusion that becomes a laboured history lesson in gun ballistic details of an assassination and manifold conspiracy theories.  Yet like JFK, The Parallax View has well written and credible characters but its greater power as a thriller mostly operates with a dense visual language replete with mystery.  We know and yet we don’t know what’s happening.  Should this bother us?  Perhaps we’ve assimilated so much Kafka that we can casually shrug it all off?

Such acceptable ambiguity, rich in the best 60’s and 70’s American cinema, that then audiences took in their stride, is palpably menacing yet always pleasurably suggested and inferred: like a true parallax the position or direction of objects, admirably controlled by the lens of Gordon Willis’s moody photography, appears to differ and alter when viewed from different positions.

Again and again The Parallax View’s modern architecture and authentic locations attempt to expose, semi-hide and conceal killers and their victims – a blowing up of a boat; the delivery of a poisoned lunch to a news editor; a drowning by a dam and an overhead chase in a sports stadium.  The positioning of such lethal objects is exciting.  Particularly so in the last twenty minutes that’s breath-taking.  I won’t reveal what happens only say that it’s great filmmaking comparable to the build-up to the assassination in Altman’s Nashville.

The Parallax View is the middle part of a Pakula thriller trilogy that also includes Klute and All the President’s Men.  And deeply shadowing these films is John Frankenheimer’s The Manchurian Candidate.  So maybe it was mostly the Chinese, in Korea, and their brainwashing, behind everything and not Kafka alone in Prague?  His writings were saved from being burnt.  Though not perhaps the Parallax files, if the the bureaucracy really existed.  But they did have a printed manifesto, in suitcases, promising money and self-esteem for the aggressive loner desperate for attention in this now classic film.