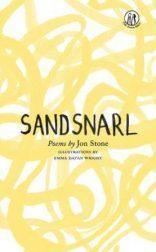 Having heard it rumoured that the title Sandsnarl has some connection with toys and possibly gaming culture, I chased the word as far as I could, with the help of DuckDuckGo, to discover that ‘Snarl’ is a Transformers villain, capable of creating a Sand Bomb, via the use of Sand Magic. He is aggressive, but not always on the side of the baddies. “Only the joy of combat washes away the ache in his spark.” At this point I admit that I’m out of my depth, leave the internet and return to the pages of Jon Stone’s sand-centric pamphlet, which certainly has plenty of spark.

This is engaging and inventive poetry, often reminiscent of (and explicitly referencing) the works of Borges, Calvino and other playful texts. Stone takes the idea of sand then twists and turns it to suit multiple purposes. Sand provides its own vocabulary, doing all the things sand can do; the poems scintillate with sifting and trickling, silica and storm. It offers tantalizing hints of insight:

At times, it seems to represent a breakdown of ‘reality’, a surreal invasion, a collective dementia, a glamour thrown across the world, even a pandemic. But its meanings remain elusive:

There’s a great deal of joy. Stone revels in narratives, often told in small glimpses; there’s a sand-domination origin myth (“Before there was a now, there was a jar…”), a sand smuggler “divests himself of evidence”, a “roboteer” struggles to resuscitate her flying machine. There are avatars and explosions, and in one poem the protagonist takes revenge for being excluded from a guest list by appearing as a marauding cheetah:

And everywhere there’s sand, sometimes entrancing, sometimes horrific, both the question and the answer.

Sandsnarl provides textbook examples of the genre of the long poem title. Readers either like these or find them too mannered. Reading through the collection, I veered from one side of the fence to the other, but in the end I gave in and enjoyed theor sheer extravagance and cheerfulness. To one brought up in the 50s on children’s books such as Kipling’s’ Just-So Stories’, they hark back to those times, an impression enhanced by the scattering of capital letters. For instance: ’Things the Sand Orphan Mumbles, Half to Himself and Half to His Distant Darling, as He Journeys Upward and Out of the Underground Station.’ Of course, these titles are knowing and ironic, with a 21st Century inflection. Very much a part of the poems, they question their own verbosity by extending it to comical lengths. They could be read as a wry comment on poetry itself, and on those of us who enjoy reading and writing it.

Rhyme is everywhere, too, adding an obsessive sense of inevitability or even of crazed ritual. I’ve re-read the Roboteer poem several times, simply to experience again the cascading pleasure of the line endings: quaking/ snakeskin/ instrumentation; girl/ agile/ gurgle; intakes/ joysticks/ diagnostics; and so on. In ‘Things the Sand Orphan Mumbles…’, fourteen lines are arranged in couplets that begin by following the abba pattern of a Shakespearean sonnet, then repeat it with the same rhymes, ending with an ab couplet. The poem is friskily rhythmic too, but at the same time Stone pulls off the feat of touching the reader on a deeper level as a theme of lost love becomes apparent. Rather than becoming bogged down in the form, as some rhyming poems do, along the way there are lovely, lyrical lines that seem conjured into being by it:

Sand protagonists proliferate; among them there are a ‘Thulr of sand’, a ‘Sandskinshifter’, a ‘Sandsinger’ and (my favourite, bringing to mind Michael Symmons Roberts’ different version of magic) a ‘Drysalter of Sand’. And as in a Borges story or a surreal painting, the poems are self-reflexive, celebrating their own artfulness. In the poem whose title begins ‘Two Makers of Sand Toys…’ there’s a description that seems to mirror the poet’s creative process:

In answer to the question of “what they’re for and what they further”, one of the makers replies teasingly:

Jon Stone is himself a multi-media designer and editor, and as in other collections from Emma Press, the pamphlet is lovely to look at and to handle. Every aspect has been thoughtfully chosen; the typeface is delicately beautiful, the pages are a sandy tone of cream. Stone has collaborated with Emma Dai’an Wright, whose illustrations follow the sand theme, while avoiding the too-literal; they also introduce a brooding, hooded character, perhaps representing the poet as observer.

Reading these poems was for me an uplifting experience. Stone creates a flow of light and dark imagery, threaded through a game of ‘now you see it, now you don’t’, which includes (how could it not) hints of apocalypse, yet because of its energy and wit, conveys overall a sense of optimism. Like a day at the beach, it’s left me with pockets full of sand.