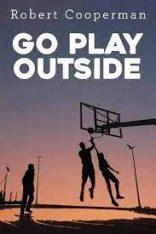 I affectionately think of Robert Cooperman’s latest collection, Go Play Outside, as “Coop’s Hoops,” his love songs to the game of basketball. The book begins appropriately with mock biblical solemnity. The poem, “Genesis,” starts out:

After detailing the challenges James Naismith encounters as he invents this new athletic pastime, Cooperman concludes the poem:

Cooperman continues the origin story of the game in “Basketball and the Jews” before going on to recount his own introduction to the sport on the public school courts at P.S. 217 in Brooklyn.

Poems springing from childhood fascination with the game follow – street ball, three-on-three; pretending to be Elgin Baylor shooting at the clothes-hanger basket with rolled-up socks with his brother while the downstairs neighbor, Mr. Moskowitz, fumes and hammers the ceiling with a broomstick; going to Madison Square Garden in the early 1960’s to see the Knicks and the Minneapolis Lakers, for whom Baylor, Cooperman’s childhood god, played. In “The World’s Greatest Job” he remembers

Part Two, “Throwing the Rock,” includes more nostalgic reminiscences of shooting hoops, from childhood and into adulthood: “Shooting Hoops at the Young Israel of Flatbush Schoolyard,” “At the Basketball Courts: Athens, Georgia,” “Playing Basketball with My Nephew: Levet, France,” “Talking Basketball Somewhere in Holland, 1970,” and “Lay-Up Drills Before the Game” are a few of the titles of wistful memories. “At the Baltimore Athletic Club” begins:

Part Three, “What Got Me Through,” continues the memories, but the stakes are a little higher. In “Cab Ride from Madison Square Garden: the NBA Playoffs,” he recalls going to a game with his father, as a teen, and drinking beer after beer with him, enjoying the game, yes, but also to forget “that Vietnam / was crowding me with its full-court press.” In “I Could Understand: Knicks Vs. Celtics, Madison Square Garden,” he and his wife Beth attend a game between the archrivals, and when the Knicks lose on Larry Bird’s buzzer-beater, they witness a savage fistfight break out between two guys sitting in front of them, and they flee with their friend Dave as security swarms.

“Taking Beth to the Denver Nuggets Game Against the World Champion Golden State Warriors” is a humorous poem in which, his attention fastened on Steph Curry, “sinking treys like dropping sugar cubes into coffee,” he misses the real action taking place in the seats in front of them. Beth tells him about it later. A man’s wife and daughter go to the restroom, and while they are gone, the wife’s gorgeous friend scooches over, “her skin like hot caramel, and abundant // under the halter top she wore.” She caresses the man’s face, “then a quick kiss / from pillow-lips, before she returned to her own seat, // the guy staring as if Adam’s last glimpse of Eden.”

“What Got Me Through” is a tender paean to his wife, Beth, after his hip replacement surgery. Rather than take the Oxycontin for pain management, terrified of becoming addicted to the opiod, he’d watched the NBA championship on television, “though I can’t remember who won / the championship that year.”

The final section of Go Play Outside, “The Elgin Baylor Chronicles,” amounts to a sweet elegy for Cooperman’s basketball idol: “When I was a kid, / he was my god of basketball,” Cooperman writes in “Elgin Baylor.” “My Full Height” begins:

“You Bet Your Life” is another humorous poem, a memory of seeing Elgin Baylor and his wife on Groucho Marx’s quiz show, as a kid. When Elgin reveals to Groucho that he and his wife had had two kids in three years, “Groucho leered,

The nine-poem Elgin Baylor suite – and Go Play Outside itself – ends with “On the Death of Elgin Baylor”; the final lines read:

“Coop’s Hoops” is a slam dunk.