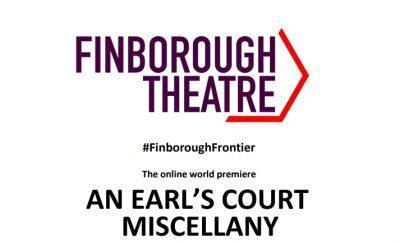 The world is divided into those desperate to return to life as it was before COVID and those who have their doubts.

For anyone who has quietly embraced the advantages of being healthy at home and the creative thinking required of enforced change, the ever-inventive Finborough Theatre has combined its return to real-life drama with an enlightened decision, in the spirit of access for all, to carry on delivering original online work for free that surely can only enhance one of the strongest off-West End brands.

One of the first of its new online shows, under the umbrella #FinboroughFrontier productions, An Earl’s Court Miscellany is a patiently-researched and artfully-presented nostalgia trip.  It revives fond memories of the journey via Brompton Cemetery and past the tall, narrow London houses to the upstairs theatre of the Finborough Arms.

Of the many that have taken the route, those who became famous provide the inspiration for this eclectic selection of literature lovingly read and performed by a predominantly female cast.

As a narrative device, Ninka Scott, in the role of a cockney landlady, with a knowing laugh, lures us in from the cold into her Bohemian house where many an artiste has stayed.

The rent is reasonable, which is appropriate given the Finborough has just abolished rental fees for visiting companies.  Also appropriately, a wide range of characters has been made to feel at home.

They range from Beatrix Potter (who drew inspiration from walks in Brompton Cemetery where squirrels run over the grave of Susanna Nutkins and her grandson Tom) to war poets, suffragettes and to the new writing of the present that thrives at the Finborough and the nearby Troubadour coffee house.

We begin by discovering or reacquainting ourselves with The Cuckoo Clock by Mary Louisa Molesworth (1839-1921), read by Louise Ashcroft.

“Time indeed did seem to stand still in and all about the old house, as if it and the people who inhabited it had got so old that they could not get any older, and had outlived the possibility of change.”

It establishes a mood that celebrates talent’s response to inevitable change and is also mournful.  The show is dedicated to the memory of Clive Swift, a household name for his role in Keeping up Appearances, who died pre-pandemic in 2019.  Adding to the feeling of loss, many of the Miscellany’s works dwell on war (Ivor Gurney, WB Yeats), ghosts (Sweet William’s Ghost – Anon) and the suffering of the suffragettes.

But there is plenty of light relief.  We have Spike Milligan’s The Glutton and Lesley Stone’s jaunty rendition of Lesley Wilson’s Neighbours, which leaves nothing to the imagination about what kind of noises the neighbours are making.

We also ponder Empire as exulted by the 1851 Great Exhibition at the Crystal Palace, which was largely the brainchild of Sir Henry Cole, who now lies in Brompton Cemetery.

He’s the cue for the traditional Old King Cole and an extract, read by Jeryl Burgess, from HRH Prince Albert’s Speech at the Lord Mayor’s Banquet, Mansion House.