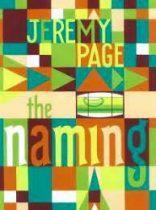 The last line of Page’s previous collection, Closing Time is ‘ why home is where we start from’ and it is fitting that his latest collection, “The Naming” begins at home. The first poem, ‘Postcard of Odessa’, starts with ‘Clearing out another drawer, / I come across the postcard / quite by chance […]’. Clearly, we’re back in a home, and Page is sorting stuff out that has probably been transported from home to home over the years, the accumulation of memories that comes with the accumulation of stuff and things. And we see how a simple device like a postcard allows the poet to travel across both space and time to such poignant effect. Before long he is pulling memories from across the void…

It’s a master stroke of an introduction to a collection that is chock full of work about the power of memory (however reliable) and recall. It draws details from small events and objects and then extrapolates them to often quite devastating effect.

Like Closing Time, this collection is also divided into three parts. The first of these in this book focuses on family and friends, for example a grandmother contemplating the augers of a jackdaw

I particularly enjoyed the pleasing surrealism of ‘The Measure Of It’ (and what is measuring if it isn’t some small kind of naming?) and it’s ‘great aunt from Worthing’ who measured ‘everything in yards’. She sets our protagonist off thinking about measuring other things in new ways like ‘love affairs in furlongs’ or ‘inner legs in pints’, etc.

Which poets amongst us can’t say we’d be happy with that as a prize for our work? It would certainly put a different complexion on the Costas or TS Eliot prizes,, but either way I think that on the basis of this poem Page could get at least a year of fully-funded travelling covered/paid for by the two stanzas of this poem.

And travel is something that features quite extensively throughout the book, with the first section alone covering Odessa, Worthing (this has the makings of an extreme version of Trotter’s Independent Trading) the Mediterranean, Machu Picchu, Patagonia, and the imaginary travels of the Walter Mitty-like character of the poem, ‘Monkey’.

It would be fair to say that travel through time is ever-present also, with the book’s many flashbacks and look backs. This is especially true in the one-two punch of ‘The Fire of Nostalgia’ and ‘Foreign Country’. In the latter, the potential for an older man to grumble about the present is avoided in lines like “We lived life forwards, but hadn’t seen / enough to understand it backwards.’ And the final couplet of this sonnet has a nice way of capturing of the things we forget as time goes by.

This begs the question of whether the loss of fluency is a deliberate ploy or the result of things being lost in the mists of time. I think it’s the former because the poem follows ‘The Future of Nostalgia’ where the poet is much more future-facing.

The use of the italicised present tense in each poem is interesting way of pretty definitively nailing their colours to the proverbial mast.

It’s entirely arguable that the travel and wanderings continue in the second part of the collection. This takes the form of explorations of words drawn from other languages, the sorts of words for which there is no direct or obvious English translation. It’s a sort of poetic The Meaning of Tingo.

Using these words allows the poet a way into doing what it is that poetry does – finding ways to say the unsayable. A classic example of this can be found in ‘Fernweh’. Please note the word is of German origin and translates as ‘the call of faraway places’. If I could quote the whole thing I would, but this will have be to be enough to whet your appetite.

This poem feels especially pertinent as the world is slowly—very slowly—beginning to open up again after two years of restrictions and confinement in the same four walls. The section is filled with these moments, of people simultaneously holding a variety of viewpoints and ideas about existence. We see this at the end of the section in ‘Razljubit’ (Russian for falling out of love), where our narrator is remembering a lost lover—is it the person from ‘Postcard of Odessa’? He watches them leaving

That poem is the last of section two, and I like that Section three, ‘The Naming’ begins with what feels to me like the poet mocking himself in ‘The End of Poetry’. Its first stanza reads

The preceding poems have to a degree done this very thing, and it must be said we are all the richer for having read them. It’s healthy to see the poetic ego punctured in such a way that doesn’t lapse into parody or trite rhyming couplets, especially since having told exactly what he is not going to do, the poem finishes with

It’s a strong intro to a section that clearly isn’t the ‘last poem’, but it is a section of lasts, losses, and farewells. In ‘Dreaming Mount Fuji’ there’s a foreboding sense of the poet’s death in the lines

And we see a sequence of farewells (knowing or otherwise) in the three parts of ‘Those Goodbyes’. Part one sees a son leaving to travel, a grab at independence ‘ at the departure gate, / Gatwick, six a.m.,’ that is juxtaposed with an arrival 20 years previously when Page is

These beautiful moments are put against the potential losses in the last two parts of the poem where Page meets an old teacher who has reached ‘a good age’, we don’t know if they ever see each other again. However, in the final part (‘The Godfather’) we are at a wake for a man ‘who died without writing / the Teach Yourself on how to live. / but could have.’

This leads into a poignant section about the loss of parents. In ‘Last Card’, we see a call back, again, to the opening poem of the book. The poet tells us at the start about writing postcards to send back whenever they go anywhere. We see them at the end of the poem

You have to wonder if they mean the last they will ever write, or the last that the recipient will read. In light of the poems that follow, I think it’s the latter. In the poem that follows, ‘Last Times’, we hear about the loss of the poet’s mother through about a range of missed moments; perhaps the sorts of things you might even find recorded on a postcard.

These gentle, delicate times take on new poignancy in light of the closing stanza.

Those final two lines evoke the pain of coming to terms with balancing what is best for the person suffering with the desire to keep someone with you for as long as possible. This is rammed further home in the poem that follows, ‘Fading’ about the poet’s father and his suffering with Alzheimers.

The lack of punctuation in this stanza and the others in the poem shows the slide and dissolving of space and time, and the one break after ‘the fragile line between me / and everyone else…’ is an example of expert use of form and meaning.

The collection ends on a more positive note in ‘The Return’. It states the ‘kittiwakes are back / and nights are drawing out’ and talks about the ‘familiar rituals’ that carry on and ‘unfold’ around us

I am choosing to take the last three lines of this as a sort of belligerent optimism; that we are carrying on in spite of everything and that we will still be here next year when the kittiwakes return. I take comfort from this, and will keep going back to “The Naming” for comfort too.